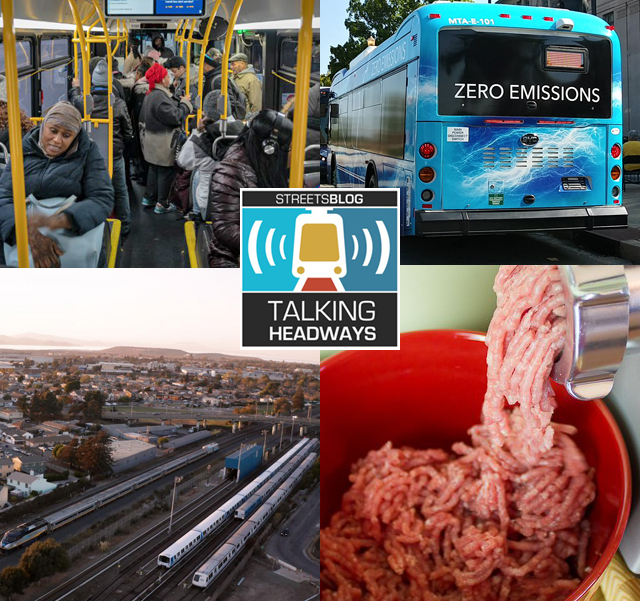 This week, we’re joined by Chris Puchalsky and Andrew Simpson of the Philadelphia Office of Technology, Infrastructure, and Sustainability to talk about The Philadelphia Transit Plan, regional rail improvements, transit service levels, and agency coordination.

Christopher Puchalsky: In terms of large infrastructure spending rail projects is that trolley project redoing all of our trolley lines, which are at the end of their useful life, is our top big infrastructure priority. And that’s already gotten picked up as a talking point among a lot of our different advocacy groups.

Andrew Simpson: Yeah. And there is a table set for a conversation, which is really important for working with the advocates, so they’re not starting from a blank slate of, you know, even if we don’t agree on a detail, we’ve got to, you know, put something out there that then we can have a, a longer-term discussion on, I think that’s really important. And it really, really makes those conversations, you know, evolved in a really positive way when we’re started from, “We agree on the framework of improving transit and getting things going.” And then we can really dive into the details and talk this out and we’ll learn something too, right? We’re going to evolve. We don’t certainly don’t believe that everything we said is going to be perfect. But it’s about kicking off a process.

Christopher Puchalsky: I think the other reason why it’s helped the plan and not so much the document itself, but the thinking that we had to put into what ended up in the document is helpful, is not just saying what is our top one or three priorities, but what’s not on the list and why it’s not on the list. So I’ll give you a tough example. Here is bus electrification. You know, it’s something that we support in the document we think is important to the document. We also think for a city like Philadelphia, it’s not our top bus priority. Our top plus priority is bus lanes and probably after that low-income fare program. You know, electrification is important, but being as underfunded as we are and the state of technological development of EV, battery, electric buses today, that’s important on the list, but not our top priority.

And so when we meet with folks who think that it should be the top priority, so we can come to the table and have a great exchange with them. But we have done the thought, you know, to actually have that exchange instead of just, you know, kind of having a knee-jerk yes or no reaction to what they’re bringing to us.

Jeff Wood: Well it’s an interesting question about what the values are of the plan and what you need to get done and how many resources you have. I mean, you have so many good things in the plan. You have bus lanes, you have better fare structure, you have the bus network redesign, trolley upgrades, but the basic value is as a really important part of that. And so what were the discussions like to make those decisions of whether or not to prioritize the bus electrification and move forward with those improvement projects like bus lanes?

Christopher Puchalsky: That’s a great question. I wish it happened super cleanly, but of course, you know, there’s always sausage making involved in something like this, but as we’ve made the sausage, a few things became apparent. I think the first thing is that we’re the poorest large city in America — and that has implications not only for who our residents are and what their needs are. But also what our budget situation is: where we are a city and a county together. And there’s not there many examples. San Francisco is that way. San Francisco on a per capita basis has almost like three to four times the budget that the city of Philadelphia has. That really matters, right, in what we can afford and what we can’t afford.

And to the degree that, you know, transit is supported or not supported by the state and federal folks, that also really matters. So that’s why, in some ways, we prioritize less expensive, but still very impactful things. And then the other two things I’ll say the biggest things are equity and climate. So what’s going to make the biggest climate impact, the quickest? We thought, getting people on a bus, even if it’s a diesel hybrid bus, is a huge improvement. That’s the best way to make the fastest advancement in climate. And then the equity aspects of a majority minority city with, you know, 25 to 26 percent poverty.

A lot of those folks are on the bus. I think a survey we did a little while ago said that 46 percent of bus riders make under $25,000 a year. So, you know, how are we going to give those people opportunity and access? I think it’s serving them with how they’re riding today, not how you they could ride if they had a few billion dollars of investment,

Jeff Wood: Is the discussion nationally a little frustrating then, because you know, they’re creating pots of money for certain investments, maybe even bus electrification for this new bill that they’re trying to get going. Is that frustrating kind, having those national discussions about these pots of money that might come your way. And then you’re saying that, you know, maybe that money should be spent on something else.

Christopher Puchalsky: I think we’ll have to see where it comes out at. I think it was a little bit, I was taken aback initially when I saw the size of the electric vehicle investment versus the size of the transit investment. I’m hoping that the transit investment, you know, stays in there and stay strong. You know, it would be great to have the federal government help in electrifying the bus fleet. That would be great. So no complaints there, but we do have this massive backlog of repairs that we need to undertake. So when you have a $4.6-billion backlog and just your state-of-good-repair needs in your transit systems, you really have to make sure you’re trying to address those first before you’re making significant improvements.

Andrew Simpson: I think it was really good to see, you know, “Fix it First” and state of good repair become important topics and something that there’s interest in. Because you need to do 20-, 30-year planning so that as you’re fixing things and as you’re making those repairs and developing that infrastructure, you’re moving towards something.

So a lot of that state of good repair is also an opportunity to evolve the service and start meeting these other goals, you know, so that we’re fixing things the way we want them to be in the future and moving towards that. I know it doesn’t always sound like the best — you know, it’s not a new project or not a new line or new something like that — but it does allow us to improve service and get people actually riding if we can increase frequency on our rail line, for example, that has set of good repair limitations. Like that’s a benefit to, to service and to ridership and meets our goals.

Christopher Puchalsky: It’s the regional rail system. Having sense of where you want to go is really important because they’re going to be investing in that system one way or the other over the next 30 years and making sure those investments are aligned. So when the next vehicle fleet is procured, you want to make sure those vehicles service the kind of vision of where you want to go. Instead of maybe in-kind replacement that could work for a different, more commuter rail focus so that we want to have 15 minute frequencies on our regional rail lines that has implications about the style of vehicle and using more Metro style fleets for our regional rail services important.

So putting that stake in the ground of that, not only hopefully that influence does internally accepted, but one way we are interacting with them. We can have a reason to ask, ready to go. I think this is the best large infrastructure proposal we’ve ever seen in this country. That doesn’t mean that it can’t get better, but this is the best one in terms of the kinds of investments that are being made.