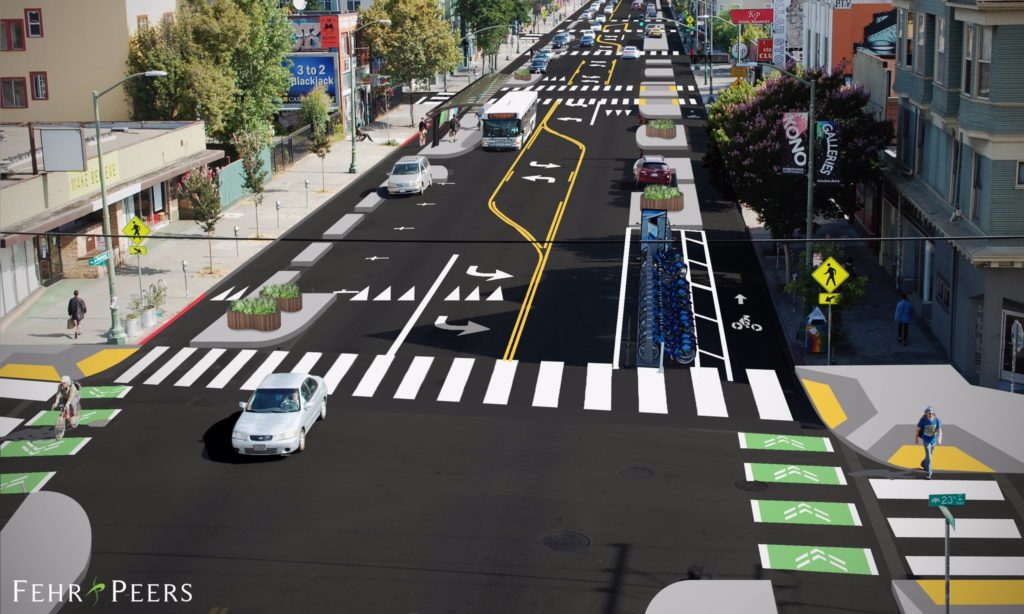 After a robust discussion that went well into the evening, the Oakland City Council voted 8-0 to support making protected bike lanes on Telegraph, from 20th to 29th in the KONO district, permanent. The other option, strongly rejected by the council, was to remove the protected bike lanes and install more typical and historically less safe buffered bike lanes between moving traffic and parked cars.

“I think this vote will help reset safety as the most important goal with projects well beyond Oakland,” Bike East Bay’s Dave Campbell told Streetsblog.

Not that other aspects weren’t discussed during the hours-long meeting. Councilmember Carroll Fife, whose district encompasses the KONO bike lanes, requested data to back up some of the claims of opponents to protected bike lanes. For example, she wanted numbers to back up a contention, made primarily by the Community Benefits District, that the infrastructure was hurting sales of local merchants. “There’s been a claim about the bike lane impacting the sales tax in the area,” she said.

Oakland DOT head Ryan Russo, who supported less-safe buffered bike lanes, was unable to answer definitively, given the many other factors that hurt sales in 2020.

Thank you Oakland City Council for unanimously supporting safer protected bike lanes on Telegraph Avenue. Thank you everyone for your efforts and support #oakmtg

There was also a claim, made by Russo, that protected bike lanes also became “unprotected” at intersections–and that there were many intersections on the stretch with poor sightlines that rendered the protection problematic. However, the councilmembers were quick to ask the obvious questions: can that be addressed by improving sightlines at intersections? And don’t the same conflicts exist for buffered bike lanes, depending on how the intersections are designed?

“If we build buffered bike lanes, we still need visibility in the reverse direction, so someone coming out of side streets doesn’t have visibility blocked,” said Russo. “You end up with the same thing.” And protected intersections, which continue physical protection for cyclists through as much of the intersection as possible while slowing turning speeds and improving sightlines, weren’t addressed, although they do appear in major intersections in the designs (see schematic below).

There was also an argument, made by the Oakland Department of Race and Equity’s Darlene Flynn, that protected bike lanes disproportionately burden the street’s mostly minority-owned businesses, presumably because of a loss of parking and loading zones. However, it was unclear how that applied to the decision between protected bike lanes and buffered bike lanes–which Oakland’s DOT promised would not be used for parking or loading thanks to a “curb management” plan. Both scenarios come with the same number of parking and loading spaces overall.

Moreover, as Fife and other members of the Council pointed out, what about the burden on disproportionately minority bus riders and cyclists, who are more likely to be injured or killed with buffered lanes?

“Having protected bike lanes would help customers; would help them get to the store safer,” said District 4 Councilmember Sheng Thao. “It’s about helping people who are less privileged, like people who don’t have cars, might use their bikes, or ride AC Transit–who are majority black or brown and seniors. For me, it’s about targeting those and uplifting those who are less privileged.”

“The overwhelming riders of AC transit and operators are predominantly people of color and they’ve expressed their concerns. I want to make sure those needs aren’t overlooked,” said Rebecca Kaplan, at-large member of the Oakland City Council.

The protected bike lane configuration was unanimously supported by the Oakland Bicycle and Pedestrian Commission, the Public Works Committee, and the AC Transit Board, prior to Tuesday evening’s vote at the City Council.

The protected bike lanes on Telegraph were part of a pilot project launched in 2016. However, due to continued debating and delays, the “pilot” ended up in the ground for much longer than intended. Posts got damaged. Paint got worn. And the overall appearance of the configuration, which wasn’t great to start with, degraded.

“The conditions people have been seeing: the messy, half-broken things, and the planters–that’s not the proposed condition,” said Kaplan. “We do need to take a lesson from this experience that I think some of the opposition was based on seeing rough implementation, poorly explained implementation, and seeing these temporary plastic devices that are getting knocked around, and thinking that’s what’s being proposed.”

The permanent installation, pictured in the lead image, should be much more aesthetically pleasing and certainly less confusing, pointed out supporters.

Meanwhile, Oakland’s decision to make protected bike lanes permanent may have implications for projects throughout the country. “I got notes from Washington D.C. saying ‘congrats on Telegraph,’” said Campbell. “I heard from one source there are other projects being re-evaluated or on pause because of what Oakland was doing with Telegraph.” Those projects too, he expects, will now move forward thanks to Oakland’s commitment.

As seen in the construction timeline chart above, construction of the final configuration will take place next year.