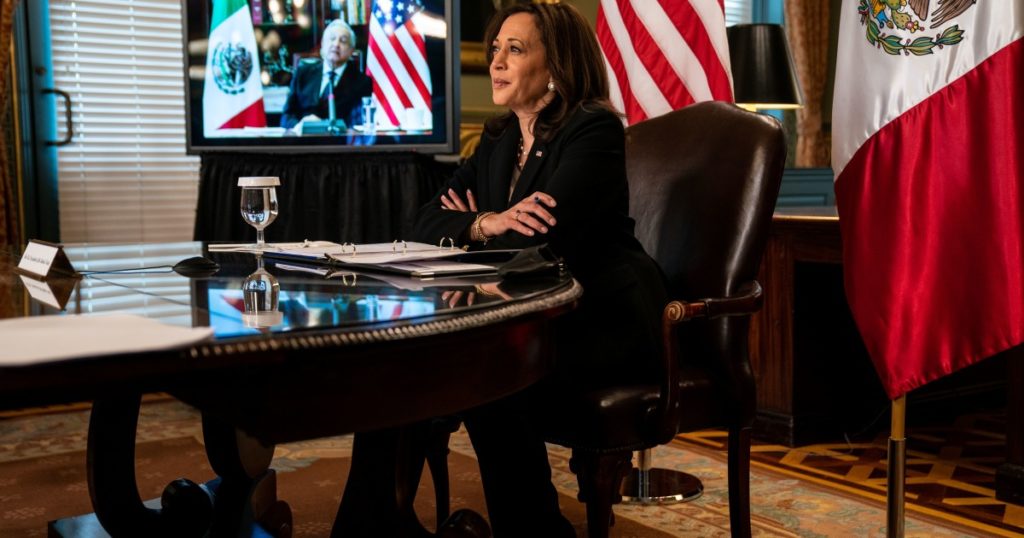 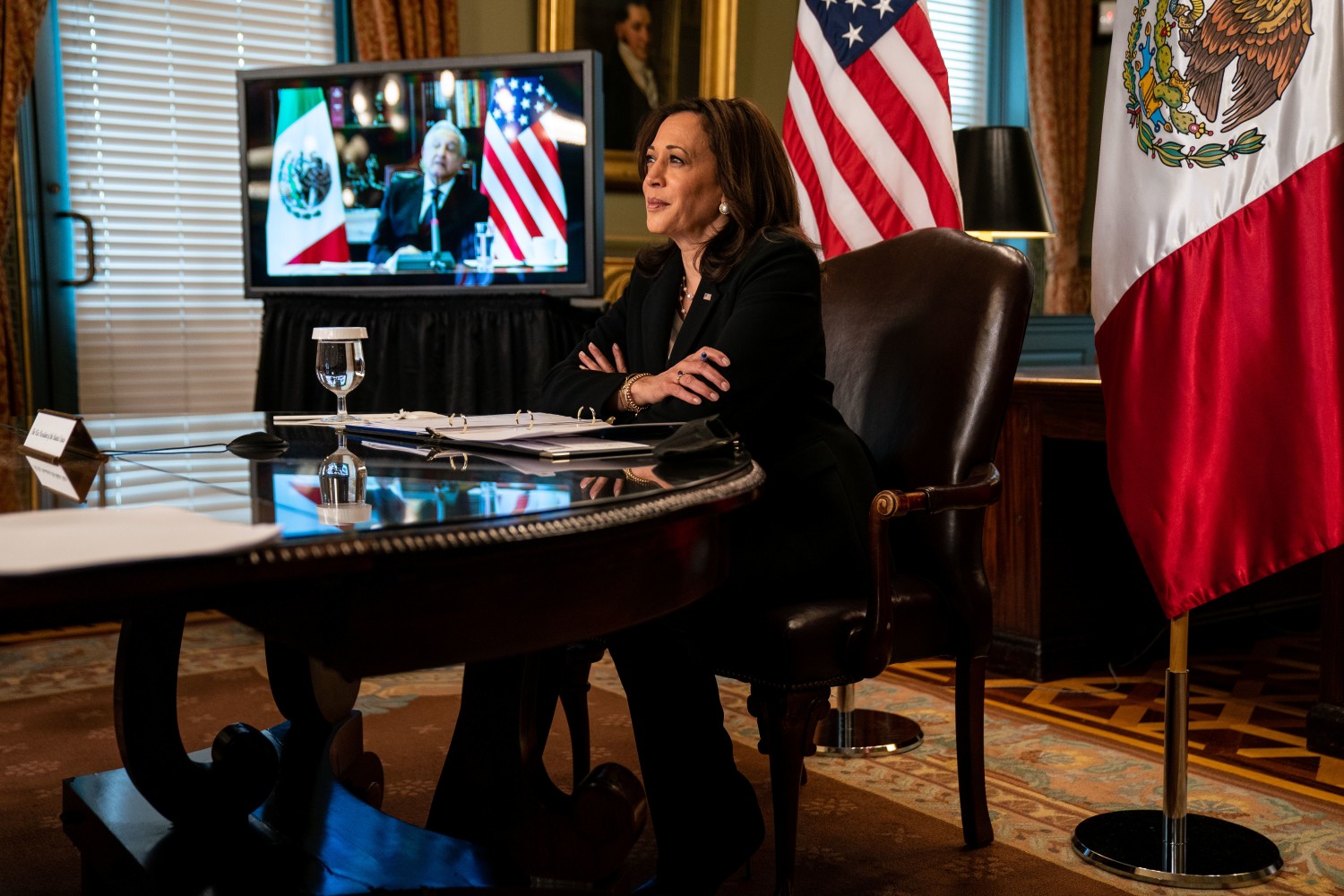 Whenever Vice President Kamala Harris has visited Milwaukee or Greensboro, N.C., or other cities to promote the Biden administration’s agenda, her travel has provoked a slew of tweets, op-eds and press releases from local and national Republicans, demanding to know why she isn’t instead going to some spot along the border with Mexico.

Most of the Republicans’ attacks, falsely calling her President Biden’s “border czar,” are mischievous partisanship — their attempts to pin the sharp uptick in migration to the United States on Harris after the president made her his diplomatic envoy to Latin America to address the “root causes” of the increase in unaccompanied children and families.

But politicking aside, some Democrats, nonpartisan policy experts and pro-immigrant advocacy groups also say Harris should visit the border, as a high-level sign of the administration’s commitment to fixing the battered immigration system and so that Harris can witness the scope of the problem she has been asked to help fix.

“She’s playing it, in my opinion, very safe by not dealing with the border,” said Rep. Henry Cueller, a Texas Democrat whose district extends 194 miles along the U.S.-Mexico line.

Harris, so far, has resisted making plans to visit, pointing out that her job description involves diplomacy in Latin America rather than policy at the border. She will fly over it next month for two days of meetings with the presidents of Mexico and Guatemala about alleviating the conditions that drive Central Americans northward.

Yet, the fraught debate over the border illustrates why Harris’ most high-profile solo assignment is so challenging, both on the substance and the politics.

Administration officials “made it painfully clear that she was focusing on root causes of migration because they knew the right wing would try to muddy her up and make her responsible for the border crisis,” said Frank Sharry, the executive director of America’s Voice, a liberal immigration group.

Republicans believe the immigration controversy can help them win control of Congress in the 2022 midterm elections, and polls provide evidence that it’s a political weakness for Democrats and the Biden administration. “The ‘root cause’ is that the border’s not secure,” said Torunn Sinclair, press secretary for the National Republican Congressional Committee, suggesting that a lack of enforcement by the Biden administration is the main driver of migration.

Her group releases daily “BidenBorderCrisis” videos, many featuring Harris, while some Republicans in Congress brandish milk cartons featuring Harris’ face to argue that she’s “missing” from the job.

“What makes the immigration issue somewhat complex is that you only stand to be harmed by it if it’s handled improperly,” said Fernand Amandi, a Democratic pollster based in Miami. “But you cannot guarantee permanent political fortunes if it’s handled flawlessly.”

Harris’ Democratic allies have suggested in recent days that as the immediate border influx eases — and the numbers do appear to be leveling off — Republicans are going to have a harder time trying to use it as a political albatross.

Yet the basis for her assignment will remain — the desperate conditions in Central America involving poverty, violence, corruption, natural disasters and the COVID-19 pandemic that cause so many to flee on their dangerous journeys. American immigration officials have been overwhelmed by the humanitarian problem of housing the migrants and refugees and processing their claims, while at the same time trying to reverse hard-line Trump administration policies.

“She’d like her major focus to be on development, but in reality she is the diplomat in chief with Mexico and Central America, and that includes broader migration and border issues,” said Andrew Selee, president of the Migration Policy Institute and one of the policy experts who have briefed Harris. “She’s going to be drawn into some of the border issues.”

Domingo Garcia, president of the League of United Latin American Citizens, a pro-immigration advocacy group, called the border situation “an emergency” in an interview and urged Harris to study every phase and hear from border agents and others who feel the immediate impact.

“You’re talking about people dying almost on a daily basis and detention centers that are overwhelmed,” he said. “And policy really does have real-life implications that she needs to see.”

Sen. Mazie Hirono, a Hawaii Democrat who serves on a Senate subcommittee responsible for border issues, told a PBS interviewer that Harris should “of course” go to the area as part of a comprehensive approach to devising a more humane immigration system.

Harris and her advisors are quick to point out that other top officials, including Homeland Security Secretary Alejandro Mayorkas, are responsible for overseeing the border.

“But we also have to deal with the root causes, otherwise we are just in a perpetual system of only dealing with the symptoms,” Harris said recently.

A White House official who would only agree to speak without being named acknowledged that the issues driving migration from Central America do intersect with problems at the border, “but her going to the border doesn’t highlight the root causes” while “visiting Guatemala and Mexico does just that.”

“We are not going to be dictated by Republican messaging on what we do and don’t do,” the official said.

Some immigration experts and advocates say it’s neither necessary nor wise for Harris to rush to the border, which they argue could be a distraction. Harris has been there at least once as a senator, joining protests of Trump’s family separation policy in San Diego in 2018 and meeting with women whose children had been taken from them. She went there at least twice as California attorney general.

“Everybody who ever talks about the border should see it. I don’t care what party you’re from,” said Theresa Cardinal Brown, who was an immigration policy advisor in the George W. Bush and Obama administrations. But every visit, especially a high-level one involving a vice president, “is a production that takes people away from doing their jobs,” she added.

“I personally don’t think she should go, just to make a big show,” Brown said.

Harris is working with governments in Mexico and the so-called Northern Triangle countries — Honduras, El Salvador and Guatemala — to figure out how to dissuade people from making the journey. Besides addressing endemic crime and poverty, she is trying to curb government corruption, a problem so pervasive that she has refrained so far from speaking with Honduran President Juan Orlando Hernández and El Salvadoran President Nayib Bukele.

Ali Noorani, president of the business-friendly National Immigration Forum, said Harris’ time would be better spent in the region, meeting with leaders and, if possible, local residents — to get a better sense of what people are facing before they decide to make the trek north.

“By the time a Central American migrant gets to the U.S. border, their life experience has been stressed by multiple interactions with cartels and with smuggling networks, with other people taking advantage of them,” Noorani said.

Many policy experts, especially on the left, agree with the broad approach Harris and Biden have outlined, which includes sending billions of dollars in aid to feed people and to help rebuild democratic institutions. The administration is also working to create ways for people to apply for U.S. visas and refugee status without leaving home.

Harris and others say the effort will be challenging and time-consuming, and the White House has yet to offer a timeline or metrics for success.

Cueller, the Texas congressman, said he wants Harris to succeed in addressing migration’s root causes. But he’s more worried about the immediate consequences in this country, even in Texas communities some distance from the border, such as Houston and San Marcos, where law enforcement officials have told of teenagers being lured to join smuggling rings.

“We want this issue to be managed quickly and in a better way,” he said. “I’d rather be talking about moneys that are going to small businesses or stimulus checks.”