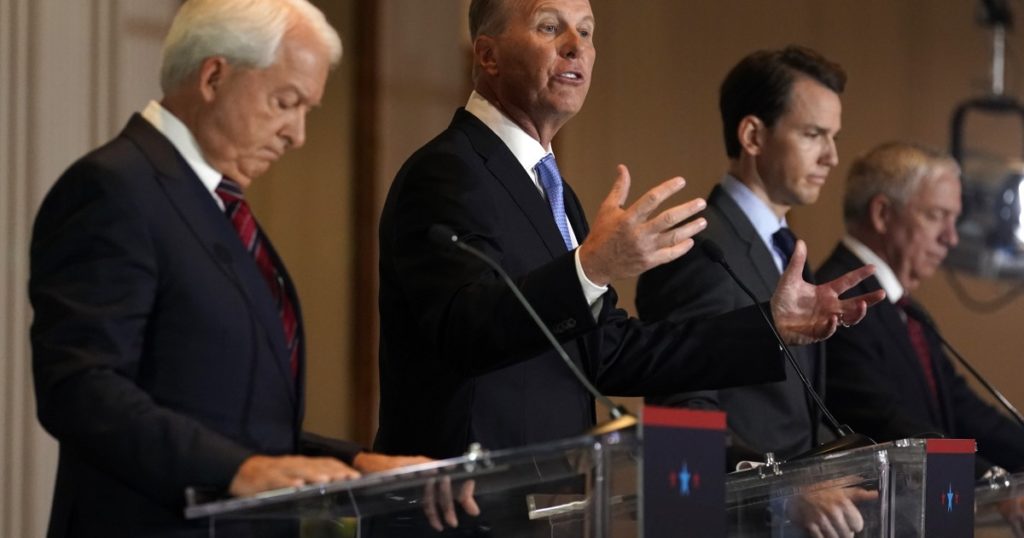 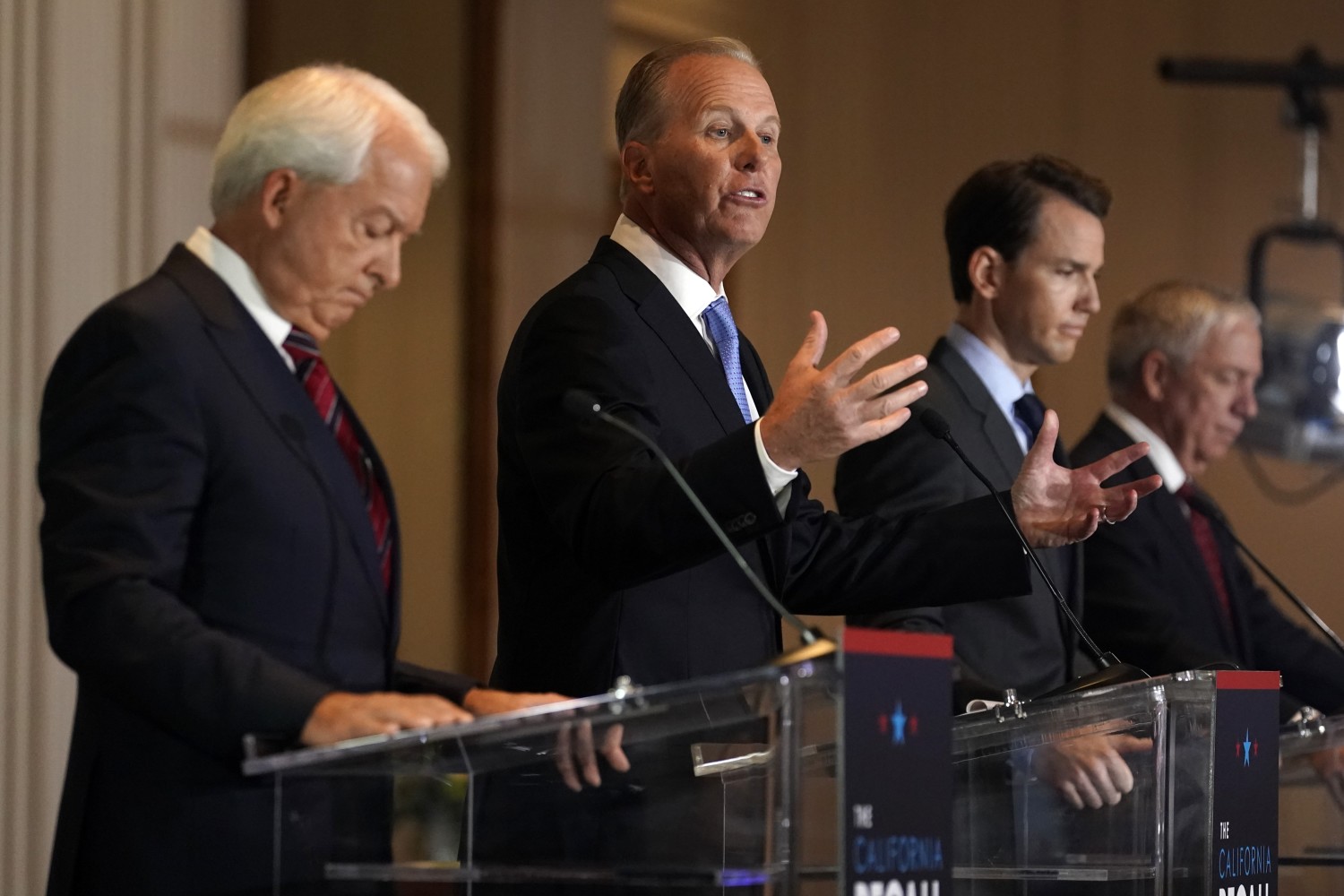 Four Republicans hoping to replace Gov. Gavin Newsom if he falls in the Sept. 14 recall election took turns blaming the governor for the state’s problems during a debate peppered with vows to end pandemic-related mask mandates, enact massive tax cuts and abolish state and local sanctuary policies that offer protections for immigrants without legal status.

The Wednesday evening event took place at a crucial time in the campaign: Recent polls show that Californians most likely to vote are nearly evenly divided on whether to oust Newsom, and registered voters will start receiving mail-in ballots in less than two weeks.

Both Cox and Ose said they favored changing California law to force treatment on homeless people who are experiencing mental illness or addicted to drugs. Kiley said as governor he would ensure law enforcement officials in California cooperated with federal immigration agencies to crack down on people entering the country illegally.

Though all four candidates were united in their opposition to mask and vaccination mandates, arguing decision-making should be left to individuals, their approaches varied.

Faulconer urged Californians to get vaccinated.

“Vaccination is how we get our way out of this. I’m vaccinated, my family’s vaccinated. And if we don’t want to be dealing this with our kids and our grandchildren, we have to take action,” he said. “But I do not favor mandates, I favor education. You’re not going to mandate your way out of the coronavirus.”

Cox, who said he had tested positive for COVID-19 earlier in the pandemic, said he believed there shouldn’t be mandates because many people have already had the virus and have antibodies.

“They don’t need the vaccine. They shouldn’t get the vaccine,” he said, directly contradicting the recommendations of the U.S. Centers for Disease Control and Prevention and the World Health Organization.

Kiley criticized Newsom’s responses to pandemic, including the rollout of vaccines and lotteries to encourage vaccination.

“It is a perfect case study for the perversity of California politics, you know, using bright lights and cash giveaways and state control as a mirage for a broken state government that fails to serve California in the most basic way,” he said.

The main target during the debate, Newsom, skipped the event. The Democratic governor spent his morning joined by state and federal firefighters as he held a news conference that provided campaign-ad-style imagery at the site of a Butte County wildfire.

The two most well-known Republicans in the race also were missing from the debate, which was held in front of a maskless crowd of about 120 in a replica of the White House East Room at the Richard Nixon Presidential Library and Museum in Yorba Linda.

Olympian turned reality television star Caitlyn Jenner, who has failed to gain traction in the race, was in Australia filming “Celebrity Big Brother.” The campaign of talk radio host Larry Elder, who has topped the field of replacement candidates in recent polls and generated ample buzz since entering the race in mid-July, said he had a scheduling conflict and did not want to participate in a GOP firing squad.

If the candidates who showed up were worried about Elder, they didn’t show it.

“I was on his show a lot in 2018,” said Cox, who unsuccessfully ran against Newsom in the gubernatorial race that year. “He said I would be a great governor.”

The candidates largely focused their fire on Newsom rather than one another, though there were a few moments of tension, notably when Ose said he had called Faulconer a “plastic man” because the former mayor used modified data to bolster his claim of reducing homelessness in San Diego. Faulconer disputed Ose’s comment.

The debate was a crucial test for Faulconer, long seen as the state GOP’s best chance for ending a 15-year drought in statewide elections. He announced in February that he would challenge Newsom, more than two months before the recall qualified for the ballot.

He has tried to thread the needle in courting GOP base voters, some of whom are skeptical of his policies when he was mayor of San Diego, while appealing to moderate voters. Faulconer, who did not support Donald Trump’s presidential run in 2016 but did in 2020, was asked whether he would welcome the assistance of the former president in an endorsement or a campaign appearance, and repeatedly refused to answer directly.

“I’d probably take the endorsement and support of any Republican, independent or Democrat who wants to get rid of Gavin Newsom and make California a better state,” he said.

Newsom and his anti-recall allies have spent months arguing that the recall is a Republican-driven effort birthed by acolytes of Trump. Earlier Wednesday, a Sacramento judge rejected a lawsuit by recall leaders challenging Newsom’s description of them as “Republicans and Trump supporters” in the official voter information guide.

Faulconer spent the weeks leading up to Wednesday’s debate outlining policy positions on pressing issues such as homelessness and the state’s drought, offering proposals that were more detailed than those of many of his recall opponents, but doing little to chip away at the apparent surge in support for Elder.

Faulconer joined the others on stage in castigating the teaching in California schools of critical race theory, which focuses on the broad effect systemic racism has had on the life of people of color in the U.S..

“The U.S. is not a racist country. The more folks that stand up and speak truth to that I think the better off we’re going to be,” Faulconer said, adding that critical race theory courses lead to “cancel culture.”

The candidates pledged to use the office to retool state government, rescind Newsom’s declaration of a state of emergency to respond to the pandemic and change appointees that determine education policy.

But given the Democrats’ supermajority in both chambers of the state Legislature, which provides the ability to override any veto by the governor, none of them would have much power to force changes in state law or reshape the state’s budget.

They’d also have only a year to make the changes they promised before they face the electorate again in the 2022 election.

Of the hopefuls on the stage, the one who was arguably most in need of a boost from the event was Cox, whose defeat by Newsom in the 2018 governor’s race was the most lopsided in modern California history.

Cox said he supported former President Trump’s effort to build a wall along with U.S.-Mexico border. When discussing how he would address homelessness, he said that “a lot of people living on the streets” need to be placed in conservatorships.

The businessman’s recall campaign, mostly funded by himself, has sought to make a spectacle of the state’s problems — beginning with a bus tour in which Cox brought along a 1,000-pound Kodiak bear intended to symbolize the need for aggressive change, and turning in recent weeks to events staged alongside an 8-foot-tall ball of trash to illustrate the need for swift action on homelessness.

Kiley, elected to an Assembly seat from the Sacramento suburbs in 2016, has gained a following among Newsom’s critics during the pandemic for challenging the governor’s use of emergency executive powers. He and a fellow Republican legislator lost a legal battle over Newsom’s executive orders last year to modify state election rules in response to COVID-19 — a battle that has endeared him to some of the party’s most diehard conservative followers.

Last week, Kiley leaned on his experience as a former teacher in Los Angeles in embracing a nascent effort to place a measure on the November 2022 statewide ballot that would authorize vouchers for families to send their children to the school of their choice.

Ose argued he had the skill set as an elected leader to tackle problems such as the state’s unemployment insurance program, which has been plagued by billions of dollars in fraudulent unemployment claims and delayed benefit payments for those out of work. Ose said he would run the agency like a successful business and make sure that Californians didn’t spend hours on hold when calling for assistance.

The candidates’ performances Wednesday may play a pivotal role Saturday when the California Republican Party will decide whether to endorse someone in the race.

Voters will be asked two questions on the ballot for the Sept. 14 recall election: Should Newsom be recalled, and who should replace him if he is recalled?

Forty-six candidates will appear on the ballot, but only a handful have assembled campaigns and raised notable sums.

For the four Republican candidates who participated, the debate provided a measure of public attention that their campaigns would otherwise have struggled to achieve. It aired on Fox 11 Los Angeles, other Fox affiliates statewide, the Salem Radio Network and other radio stations. A second debate is planned for the week of Aug. 23.