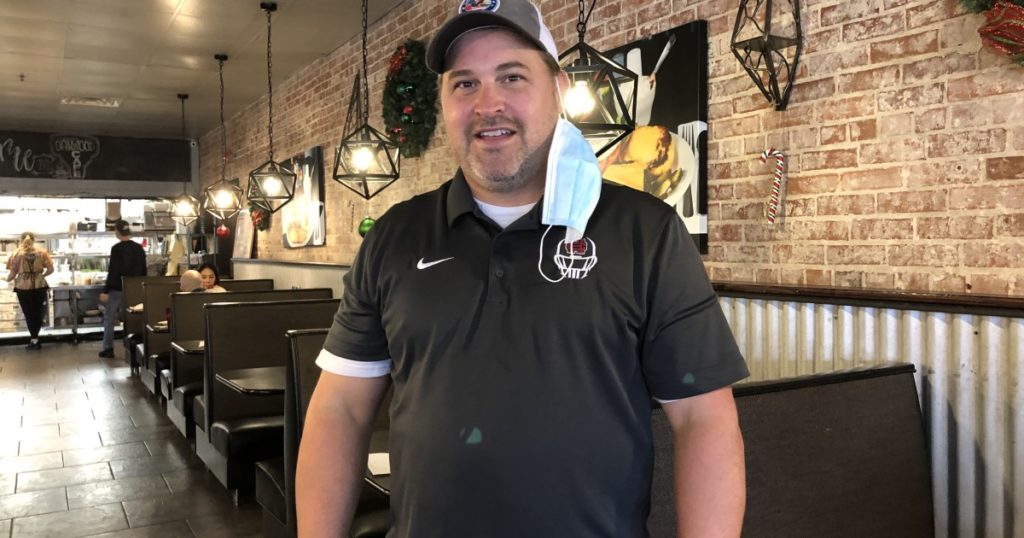 Just days before Georgia’s Senate runoff election, Kasey Carpenter strode into his bustling Southern home-style restaurant and got straight to the point.

“Bobby,” the restaurant owner hollered at a regular, “have you voted?”

Bob Cummings, 64, nodded, and Carpenter let out a whoop at having scored a reliably Republican vote. The GOP state representative knows his party has no votes to spare in Georgia’s Tuesday runoff races that will determine control of the U.S. Senate. Early election data reveal voters in the state’s Democratic strongholds have shown up in force while turnout is lagging in this Trump-supporting swath of northwest Georgia.

“We still got a good ways to go,” said Carpenter as he prepared to host Sen. David Perdue, one of the two Republicans in the runoff, at another of his restaurants. “We’re not anywhere near where we need to be.”

That’s one of the reasons President Trump will be holding a rally Monday in this blue-collar town of 33,000 that is a carpet and flooring manufacturing hub: to inspire Republicans to flood the polls on election day and erase Democrats’ apparent advantage in early voting, which ended last week.

The stakes are enormous in Georgia’s choice between Republican Senators Perdue and Kelly Loeffler and their Democratic rivals Jon Ossoff and Raphael Warnock, respectively. If Republicans win even one of the races, they keep the Senate majority. If Democrats win both, they will seize control of a 50-50 Senate, with Vice President-elect Kamala Harris casting tiebreaking votes.

Hanging in the balance is President-elect Joe Biden’s ability to pass legislation and to win Senate confirmation of administration officials and judges. The runoffs, not surprisingly, have drawn a flood of campaign donations, advertisements and news coverage.

The overtime battle — needed because no candidate got more than 50% in the November election — is a fitting capstone to one of the most tumultuous years in American politics. Like 2020 as a whole, the Georgia campaign has been wildly unpredictable, filled with apocalyptic rhetoric, buffeted by the pandemic (Perdue was quarantined for the final days of the campaign after being exposed to COVID-19), shadowed by Trump’s oversized presence, and viewed by both parties as a referendum on which direction the country should take.

“The whole country is watching the people of Georgia right now,” Ossoff said at a rally near Savannah on Sunday. “Georgia has the power to define the next era.”

It is also a watershed moment for both political parties as they enter the post-Trump era. For Republicans, the election result will be a measure of Trump’s ongoing political clout as he heads back into private life. For Democrats, it is a test of whether Biden’s winning coalition is a durable political force or an anti-Trump fluke.

In the latest twist in the state’s political drama, the Washington Post on Sunday reported on an audio recording of a phone call in which Trump tried — without success — to pressure Georgia Secretary of State Brad Raffensperger to reverse Biden’s victory.

“You have a big election coming up,” Trump told Raffensperger in the Saturday call. “Because of what you’ve done to the president a lot of people aren’t going out to vote. And a lot of Republicans are going to vote negative because they hate what you did to the president.”

Harris, who appeared at the Savannah rally Sunday with Ossoff and Warnock, denounced the call as a “bald-faced, bold abuse of power by the president of the United States.”

“It was certainly the voice of desperation,” Harris said.

Underscoring the national stakes in the Georgia elections: The same day Trump holds his rally for Perdue and Loeffler, Biden will be at an Atlanta campaign event for Ossoff and Warnock.

Uncertainty reigns, and neither side is exuding confidence. Polls show a tight race — good news for Democrats who have traditionally been heavy underdogs in statewide Georgia elections.

“It is a cliffhanger,” said former GOP Rep. Jack Kingston. “The Democrats have shown an extremely well-disciplined and organized get-out-the-vote machine. I’m envious of it.”

Still, Republicans noted their supporters typically vote in higher numbers than Democrats on election day and hope that Trump’s visit to Dalton will prod more conservatives to the polls.

“Democrats feel really good about where they are, but Republicans feel good about their chances of closing that gap,” said Brian Robinson, a Georgia GOP political consultant who is a former aide for Gov. Nathan Deal. “Trump is the best turnout machine for Republicans that there is.”

“If he drives the right message — which is the message that Loeffler and Perdue are driving, that this is the last check on socialism, the last check on a far-left Democratic agenda — then I think that could be very effective.”

The outlook has improved for Democrats since Biden won Georgia — the first Democratic presidential candidate to do so since 1992. Trump’s drive to overturn the result failed, after a protracted effort that pitted him against Republican state officials.

The November Senate results did not initially bode well for the Democrats: Ossoff and Warnock drew 48% and 33%, respectively, of the votes in two multi-candidate fields. Loeffler and Perdue seemed better-positioned to pick up voters, and Democrats have a long history of losing statewide runoff elections due to substantial drops in turnout.

“The day after election day, I felt that there was a path — but it was a narrow path, and one that required a lot of things to go right,” said Democratic state Sen. Jen Jordan.

In the weeks since then, Democrats have focused on preventing a turnout drop, especially among Black voters. A raft of voter mobilization groups, including the New Georgia Project, Black Voters Matter, the Asian American Advocacy Fund and Mijente, have fanned out across Georgia to persuade nonwhite voters to cast ballots.

In the last two months, workers and volunteers with the New Georgia Project have knocked on more than 1.6 million doors, made nearly 5 million calls and sent out more than 3 million text messages. It increased its budget sixfold to advertise its “rides to the polls” program on radio stations geared to Black listeners.

Ossoff’s closing ads were clearly directed at Black voters, one featuring former President Obama and another focusing on the struggles of Black Georgians. Obama has also appeared in multiple ads for Warnock, who would be the state’s first Black senator. Harris, the first Black woman to be elected vice president, campaigned with Ossoff and Warnock on Sunday in the majority-Black city of Savannah.

Early voting data show those efforts may be working. Of the 3 million who have cast early ballots — already setting a record for a Georgia runoff election — nearly 31% are Black, according to Georgia Votes, a nonpartisan data website. That’s up from just over 27% in the general election.

Another hopeful sign for Democrats: Early voters include more than 117,000 who did not vote in November — more than half of whom are Black, Latino and Asian. An analysis by TargetSmart, a Democratic data firm, also finds that those new voters skew younger, which plays to Democrats’ strength.

“There’s been a lot of hand wringing about ‘Will Black voters show up? Will young voters show up?’” Nsé Ufot, chief executive of the New Georgia Project, said last week in a media call. “November was not a fluke.”

Democrat-dominated DeKalb and Clayton counties in the Atlanta metro area have already surpassed 82% of the general election vote total. But here in Whitfield County, a GOP-heavy region about 90 miles north of Atlanta, fewer than 17,000 residents have voted early — 68% of the general election total turnout, according to the Georgia Votes website. In neighboring Walker County, turnout is only 64%.

“This tells us we have a real opportunity to take control of the Senate,” said Ben Tyson, co-founder of Vote From Home 2020, a progressive group promoting mail-in balloting. “The question is: What are Republicans going to do on election day? We are all waiting with bated breath to see.”

Republicans are also nervous about election day. They wonder if turnout is being depressed by Trump’s post-election allegations of voting fraud across the country and in Georgia, where he says that GOP leaders did not try hard enough to overturn Biden’s 12,000-vote victory. Some Republicans worry that the controversy stirred by Trump’s attacks — including his eleventh-hour call to Raffensperger — makes it harder for Loeffler and Perdue to close with an upbeat message.

Trump’s fraud allegations may be having an impact here in this corner of northwest Georgia. Carpenter, the restaurant owner and state representative, attributed the local voting lag to a mix of election fatigue and concern about voting machines and election fraud.

Although he said he believed there was fraud in the November election, trying to navigate the skepticism about voting was a challenge.

“Unfortunately, the Republicans are moving in a couple of different directions right now,” he said. “If you believe that the election was stolen, you should still get out and vote…. At least you’ve got to go down swinging.”

Sitting behind the counter of a feed-and-seed store in downtown, Edmond Ridley, 71, said he had voted early despite concerns about election fraud.

His cousin Jeff Ridley, standing on a stool perched in front of a wall of chainsaw belts, said he had also voted early but had run into a wall in trying to persuade some relatives to vote.

“They just shake their heads and walk off,” said Ridley, a 71-year-old retired business owner. “If they don’t turn out to vote, Democrats in DeKalb County and Fulton County — right up around there in Atlanta — the way they vote is the way the state’s going to go.”

Republicans are also hoping to mobilize middle-of-the-road voters who split their tickets in November. Laurel Browning, 54, a customer service representative at a Dalton printing company, backed Biden for president primarily to get rid of Trump, whom she considered a “psychopath.”
But she cast her early ballot Wednesday for Perdue and Loeffler because she’d been convinced that the Democratic candidates were “crazy.” She didn’t believe there had been widespread election fraud and shrugged off those who told her voting was a waste of time.

“If everybody said that, it’s all over,” she said.