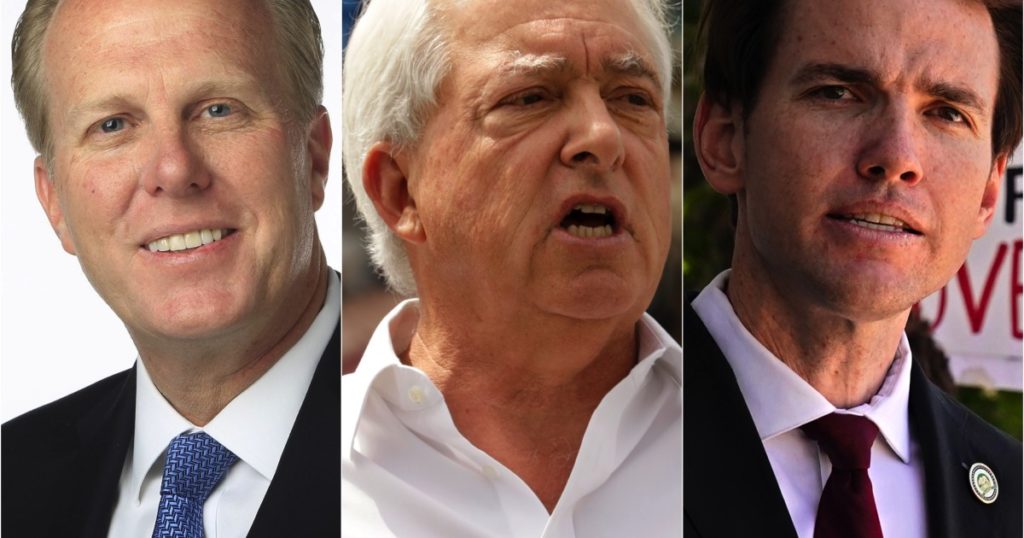 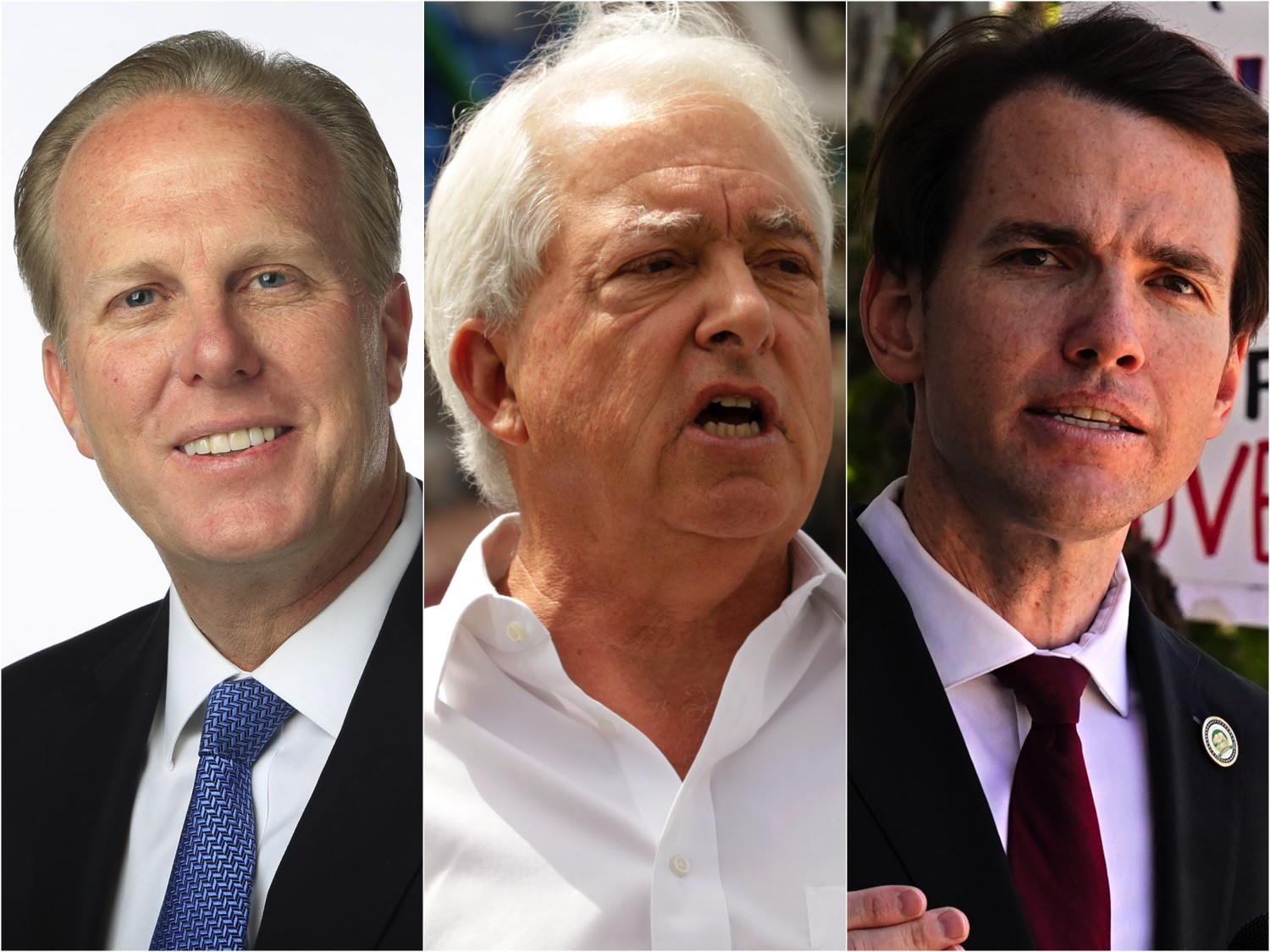 Three Republican contenders fighting to replace Gov. Gavin Newsom in September’s recall election again sought to differentiate themselves to voters by focusing in a Thursday debate on the governor and the issues facing California, sidestepping the chance to criticize Republican front-runner Larry Elder, who earlier drew scrutiny for his comments on women and allegations from a former fiancée.

Former San Diego Mayor Kevin Faulconer, Rancho Santa Fe businessman John Cox and Assemblyman Kevin Kiley of Rocklin discussed their views on topics including homelessness, the minimum wage and Newsom’s zero car emissions executive order on a San Francisco debate stage just two days after a face-off in Sacramento and less than a month ahead of the Sept. 14 election.

Newsom, who has declined to participate in the debates held during the campaign, sat out the Thursday night event hosted by Nexstar Media Inc.’s Inside California Politics. Debate moderators Frank Buckley and Nikki Laurenzo said that Elder and Republican Caitlyn Jenner, the former Olympian and reality TV star, also would not participate though they qualified for the debate.

In a crowded field of 46 candidates, the three onstage Thursday articulated largely similar stances. Each said they are vaccinated against COVID-19 but oppose vaccine or masking mandates, instead emphasizing that the decisions should be made by local health departments, school districts and parents rather than by the state.

“The problem with a lot of people not wanting to get vaccinated is frankly a lack of trust in government. Gavin Newsom exemplifies that,” Cox said. “We have to make sure people respect and trust their leader.”

On homelessness, Faulconer trumpeted his experience as mayor of San Diego, where he prohibited tent encampments and created a network of shelters.

Kiley agreed that shelters allow for people to move off the street, pointing to the U.S. 9th Circuit Court of Appeals’ decision that cities cannot prohibit people from sleeping on streets if there are not enough shelter beds for them.

“That’s why it’s important to have shelters for them to go to … so you can tell them to move along,” Kiley said.

When asked how he would address people who do not want to move into shelters, Cox responded that the answer is to treat the root causes of homelessness such as addiction and mental illness.

“Instead of buying hotels and putting people in hotel rooms, we’ve got to get them treatment,” he said. “And if we have to, we’ll force them to get treatment.”

All three candidates vowed to rescind Newsom’s executive order to require all new vehicles sold in the state to be zero emission by 2035, saying it was improper for the governor to issue such a far-reaching mandate.

Faulconer said what the state should do instead is offer incentives to entrepreneurs to help reduce vehicle emissions, saying California leads the nation in technical innovation and is up to the task. Both Cox and Kiley dismissed Newsom’s goal, arguing that California lacks enough electricity to power such a large fleet of electric vehicles in the state.

Under Newsom’s order, the California Air Resources Board would implement the phase-out of new gas-powered cars and light trucks and also require medium- and heavy-duty trucks to be zero-emission by 2045 where possible. California would be the first state in the nation to mandate 100% zero-emission vehicles, though 15 countries have already committed to phasing out gas-powered cars.

When asked whether they believed in climate change, both Faulconer and Cox said they believe that actions by humans have indeed affected the climate. Cox blamed China and India for being major contributors to the problem and said the United States should export more natural gas to those countries to reduce their reliance on coal-fired power plants. Kiley skirted the question, saying California’s wildfires created more harmful emissions than the measures the state has taken to reduce pollution from vehicles.

Largely missing from the event was any discussion of Elder, who has drawn criticism in recent days for demeaning comments he has made about women. On Thursday, Politico reported on an alleged argument between Elder and his former fiancee, Alexandra Datig, in which Datig alleged that Elder checked to see whether his .45-caliber revolver was loaded.

In an interview with The Times last week, Datig relayed a similar story as well as other allegations against Elder. Ahead of Thursday’s debate, Elder issued a statement denying any wrongdoing.

Moderator Laurenzo, an anchor at KTXL in Sacramento, asked the candidates their view on Elder’s position that minimum wage should be zero. Kiley and Faulconer agreed there should be a minimum wage.

“I’ve looked at the polls,” Cox quipped in response. “Undecided is running away with this race, Mr. Elder isn’t.”

A UC Berkeley Institute of Governmental Studies poll released in late July found that 40% of likely voters in California remained undecided on a replacement candidate in the Sept. 14 recall election.

At one point, moderator and KTLA anchor Frank Buckley asked the candidates to raise their hands if they would vote for former President Trump should he run again for president in 2024. Cox said he would vote for Trump over President Biden “any day of the week.” Faulconer said he would make the decision at the time of the election and instead criticized Newsom for trying to make the campaign about the former president. Kiley declined to respond, saying that he does not get involved in national politics.

Polling continues to show that voter turnout will be crucial in the recall election. A recent poll by the UC Berkeley Institute of Governmental Studies and co-sponsored by The Times showed that the race is tight among likely voters, with 47% supporting the recall, compared with 50% who are opposed. Polling averages compiled by FiveThirtyEight also show a razor thin margin dividing 48.8% of voters who want to keep Newsom as governor and 47.6% of those who would vote to recall him.

The Berkeley poll showed that 18% of likely voters preferred Elder among the replacement candidates in the race. Behind him, Faulconer and Cox both were backed by 10% of likely voters, Kiley received support from 5%, and Jenner and Democrat Kevin Paffrath, a personal finance influencer, both garnered 3%. Paffrath offered to donate $50,000 to a charity should he be invited to Thursday’s debate, but the host declined, saying he did not meet the debate’s criteria by Aug. 4.