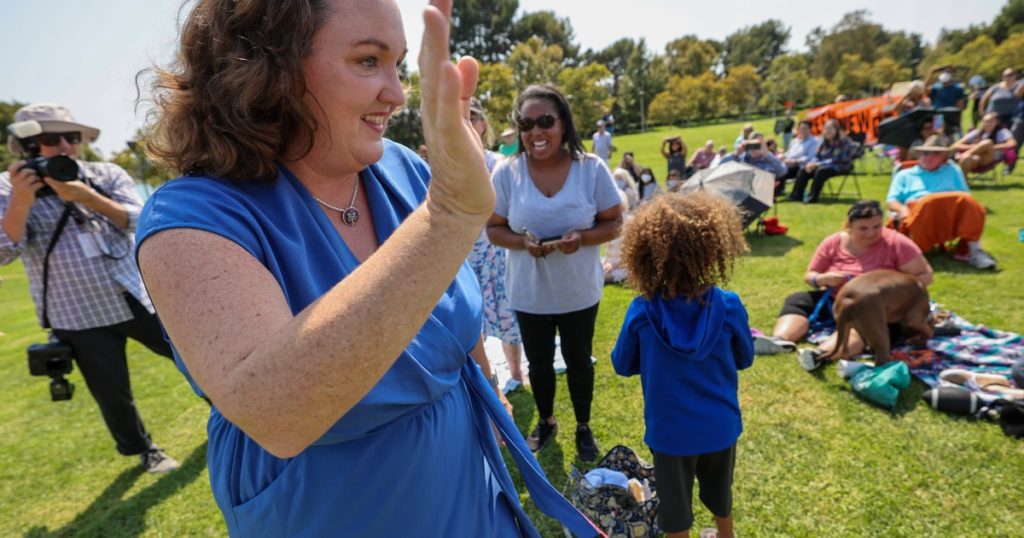 Rep. Katie Porter isn’t a member of congressional leadership, nor is she a firebrand who is constantly in the news. But the Orange County congresswoman is among the most powerful fundraisers in the U.S. House of Representatives.

Of the members of the 435-seat House, Porter (D-Irvine) came in at No. 5, raising nearly $4.9 million in the first six months of this year, according to fundraising disclosures filed with the Federal Election Commission on Thursday.

That puts her haul just under powerful veteran lawmakers such as House Speaker Nancy Pelosi (D-San Francisco) and House Minority Leader Kevin McCarthy (R-Bakersfield), and above every other member of California’s congressional delegation.

Porter has $12.9 million in cash on hand, a war chest that sets her up formidably for next year’s midterm election and could provide the foundation for a run for the U.S. Senate.

Political experts say Porter’s fundraising prowess is not surprising, given how she has drawn national attention and affection from Democrats because of her sharp questioning of corporate CEOs and government officials during congressional hearings and the perception that she is relatable.

“Her image is appealing because she’s so authentic. She really is a mom in a minivan. She really is an expert with a white board,” said Rose Kapolczynski, a veteran Democratic strategist. “It’s not contrived by somebody sitting in a campaign office. … Katie Porter owns who she is and is happy to nerd out on an agency’s testimony, and people respect that.”

The four members of Congress who raised more than Porter were Rep. Steve Scalise of Louisiana and Pelosi, who each raised $6.9 million; McCarthy, who took in $6.3 million, and Dan Crenshaw of Texas, who received $5.2 million.

Rep. Adam B. Schiff (D-Burbank) was the only other Californian in the top 10 fundraisers for this year; he raked in nearly $4 million and has more than $15.6 million in the bank.

Porter, a 47-year-old attorney, declined to be interviewed for this story.

Porter first won the longtime Republican stronghold in the “blue wave” of 2018, then won reelection last year by 7 percentage points. Still, Porter underperformed President Biden in the district, which is partly why she is among the Democratic incumbents being targeted by national Republicans in next year’s midterm election.

Voter registration in the district is 34.8% Democratic, 34.6% Republican and 25.7% who identify as having no party preference.

Porter, a protégé of Sen. Elizabeth Warren (D-Mass.), has embraced some of the more liberal policies of her party, such as Medicare for All. Republicans are hoping that such positions put her at odds with swing voters.

“No amount of money will change the fact that Katie Porter continues to support a socialist agenda that is causing the cost of everyday goods to skyrocket,” said Torunn Sinclair, spokeswoman for the National Republican Congressional Committee. “Orange County residents see less money in their bank accounts because of Porter and voters will hold her accountable for it in 2022.”

But Porter’s liberal views have not alienated moderate voters in her district, noted Fred Smoller, a political science professor at Chapman University.

“She wiped out her previous opponent pretty darn well, and she has built high name recognition, offered good constituent services and raised a lot of money,” he said. “She’s become a national figure.”

Porter’s supporters say that is because she remains approachable, driving around town nearly every weekend in her forest green Toyota Sienna with personalized license plates that read “OVRSITE,” and being candid about the struggles of juggling her congressional career with her family, such as when she explained to TBS’ Samantha Bee why she is direct and blunt:

Porter supporters say they are also drawn by her pointed questioning in Congress, rendering the chief executive of JPMorgan Chase unable to answer how an employee could make ends meet on the bank’s entry-level wages, and forcing the head of the Centers for Disease Control and Prevention to agree to make coronavirus testing free.

“She’s someone who’s able to have a strong voice and deep expertise in areas that aren’t always deemed sexy, but are very important,” said Laura Gowen, who has hosted three fundraisers for Porter at her Silver Lake home that raised a total of about $75,000.

Most of Porter’s donations — 81% — were $25 or less. The congresswoman doesn’t take money from corporate political action committees, lobbyists or executives from Wall Street, oil or pharmaceutical companies. The maximum individual donation allowed under law to a congressional candidate in the 2021-22 cycle is $5,800.

The money will be key if Porter’s district takes a conservative turn in the every-decade redrawing of congressional district lines that is underway.

After the 2020 census, each district in California should have roughly 761,000 residents. Porter’s district had more than 797,000 residents in 2018, meaning that it needs to shrink. If she were to lose UC Irvine, that would make the district more Republican; conversely, if she loses Mission Viejo or Anaheim Hills, that would make it more Democratic. The independent redistricting commission will release final maps next year.

The candidates who have filed to run against her are not well-known and have little money, including a self-described “American nationalist” whose behavior led to a physical altercation at a recent Porter town hall in Irvine.

The redistricting results will determine whether more prominent competitors emerge.

“If the district stays competitive, it gives Porter a leg up with her serious opponents scrambling on a later timeline,” said Jon Fleischman, a veteran conservative activist who lives in nearby Yorba Linda. “If the district becomes more Republican, it’s possible that Porter’s vast campaign treasury won’t help her hold that seat.”

This uncertainty, said Porter’s campaign manager, is why it’s so important to have money in the bank, particularly in one of the most expensive media markets in the nation.

“Building this war chest is really helpful because we might have to introduce ourselves to a bunch of new voters really quickly,” said Nora Walsh-DeVries.

Others wonder whether Porter has Senate aspirations if one of California’s seats opens up. Sen. Dianne Feinstein, 88, has filed to run for reelection in 2024. But if she doesn’t run, the race to succeed her is expected to attract a horde of younger Democratic elected officials who have been hoping to win a higher perch.

“It’s very expensive to run for U.S. Senate in California, and so you need to have that kind of campaign war chest to even begin to think about it,” Merrill said.