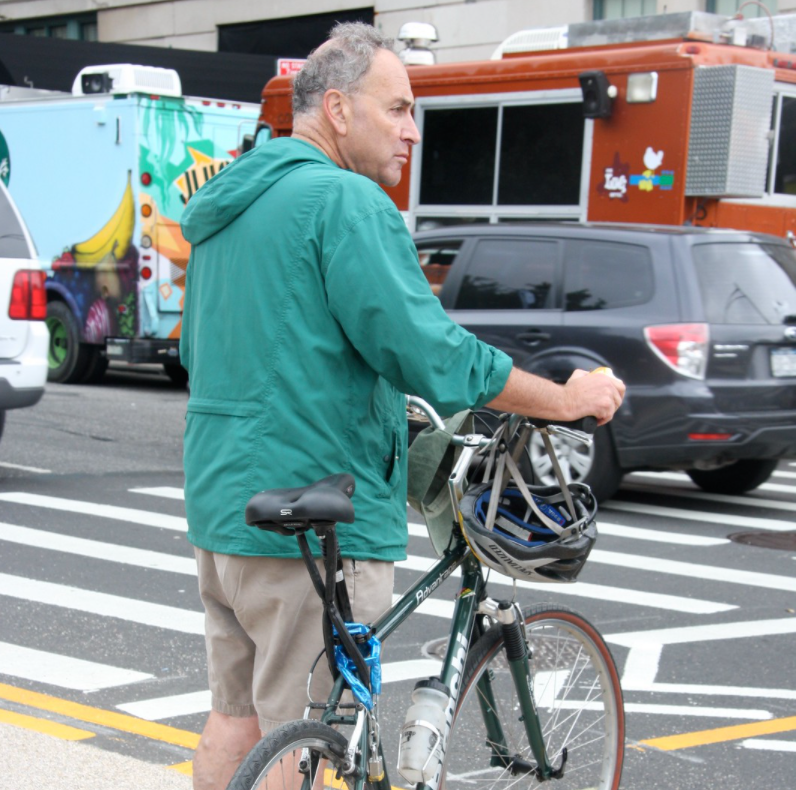 The massive reconciliation bill under consideration in Congress would fall short of achieving President Biden’s 2030 greenhouse gas reduction target, according to a top Senator’s own estimates — and the climate wins it does achieve would come disproportionately from consumer incentives for electric vehicles, rather than by shifting drivers out of cars.

In a letter released yesterday, Senate Majority Leader Chuck Schumer (D-N.Y.) urged his colleagues in Washington to work quickly to pass the controversial Infrastructure Investment and Jobs Act in concert with a still-unnamed $3.5-trillion budget resolution, which he said would collectively reduce U.S. emissions by 45 percent of 2005 levels by 2030.

That’s actually 5 percent less than Biden’s goal of a 50 percent reduction by 2030, but Schumer says the other five percent would be achieved by planned climate policies in progressive states like California, Hawaii, and New York, as well as executive actions not covered in the bill, such as changes to fuel efficiency standards.

If @SenSchumer is serious about confronting climate change he should reconsider a budget plan which spends triple on expanding highways as compared to subways and busways. #TransformTransit https://t.co/stX4koFs6p

Those claims were met with skepticism from some advocates, who pointed out that the Infrastructure Investment and Jobs Act would allow states to spend as much as $110 billion on highway expansion while offering transit agencies just $39 billion — a status-quo ratio that Transportation for America’s Abigail Grimminger said “will fail to produce meaningful shifts” in the U.S.’s climate outlook. The group has been lobbying for the restoration of an additional $10 billion for transit agencies that was cut from Biden’s initial stimulus bill, the American Jobs Plan.

But that’s looking less and likely likely. The blueprint for the budget measure that the House passed earlier this week still lacks basic details on how the $60 billion for the transportation committee and $486 billion for the energy and commerce committee would actually be spent — which made Schumer’s projections even harder to verify. Worse, the estimates he did release regarding the the combined emissions impact of the two bills attributed 15.7 percent of their combined climate wins to clean vehicle incentives, and just 4.7 percent to transit electrification and ridership increase — a difference of more than two-thirds between the modes.

Given that the bipartisan Infrastructure Investment and Jobs Act offered zero dollars to would-be EV-buyers, advocates interpreted that was a clear signal that the reconciliation bill would probably go heavy on greening the vehicle sector, while giving little to no new money for mode-shifting initiatives — confirming long-held suspicions that transit, which was the target of the largest cuts during negotiations over the bipartisan bill, wouldn’t be made whole by Democrats in the companion reconciliation package.

The climate impact of shifting Americans on to active modes, meanwhile, was not mentioned in the chart:

Sustainability advocates largely celebrated the news that the reconciliation bill would prioritize green transport, even as they questioned the balance between money for vehicle electrification versus other modes.

“We’ll be paying close attention as more details emerge, but we probably still have work to do on securing additional transit support, like an investment in operating funds,” said Matt Casale, Environment Campaigns Director for the U.S. Public Interest Research Group. “EV incentives, and the other clean energy incentives included, are really important climate policies and it is critical that they be included in the reconciliation bill, [but] it’s also true that we can’t solve the transportation and climate problem with EVs alone. We need a full suite of policies and investments that make cleaner options more available.”

As lawmakers continue to flesh out the reconciliation measure, Casale says its urgent that advocates make it known that not all emissions-cutting strategies are created equal — and that green solutions that don’t carry all the other negative externalities of car dominance should come first. As Streetsblog has reported, electric vehicles are not a simple silver bullet.

“It is important to make sure that the public support for investments in transit and other climate-friendly transportation policies are relayed to our federal representatives,” Casale added. “People want a better, cleaner transportation system, the more they are telling their representatives that, the better.”