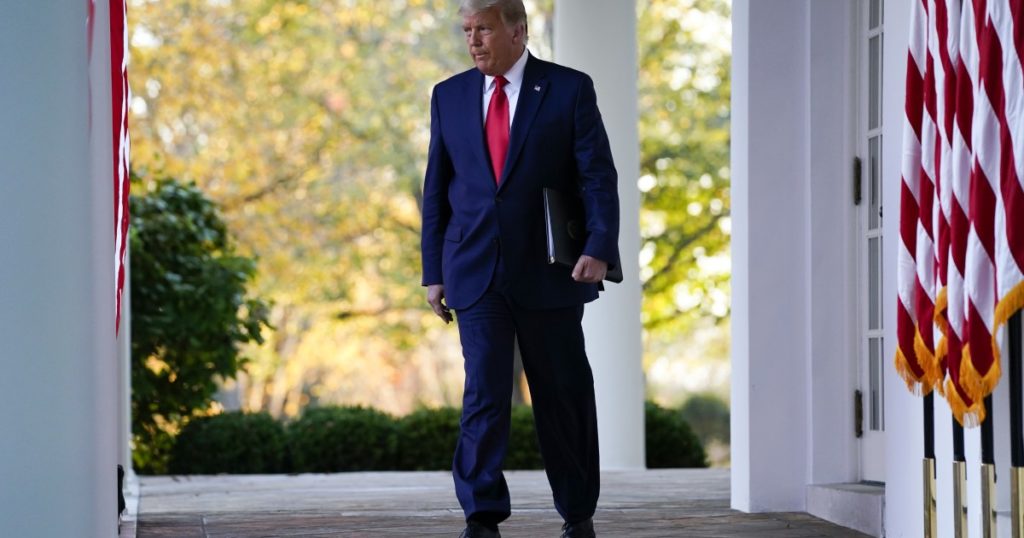 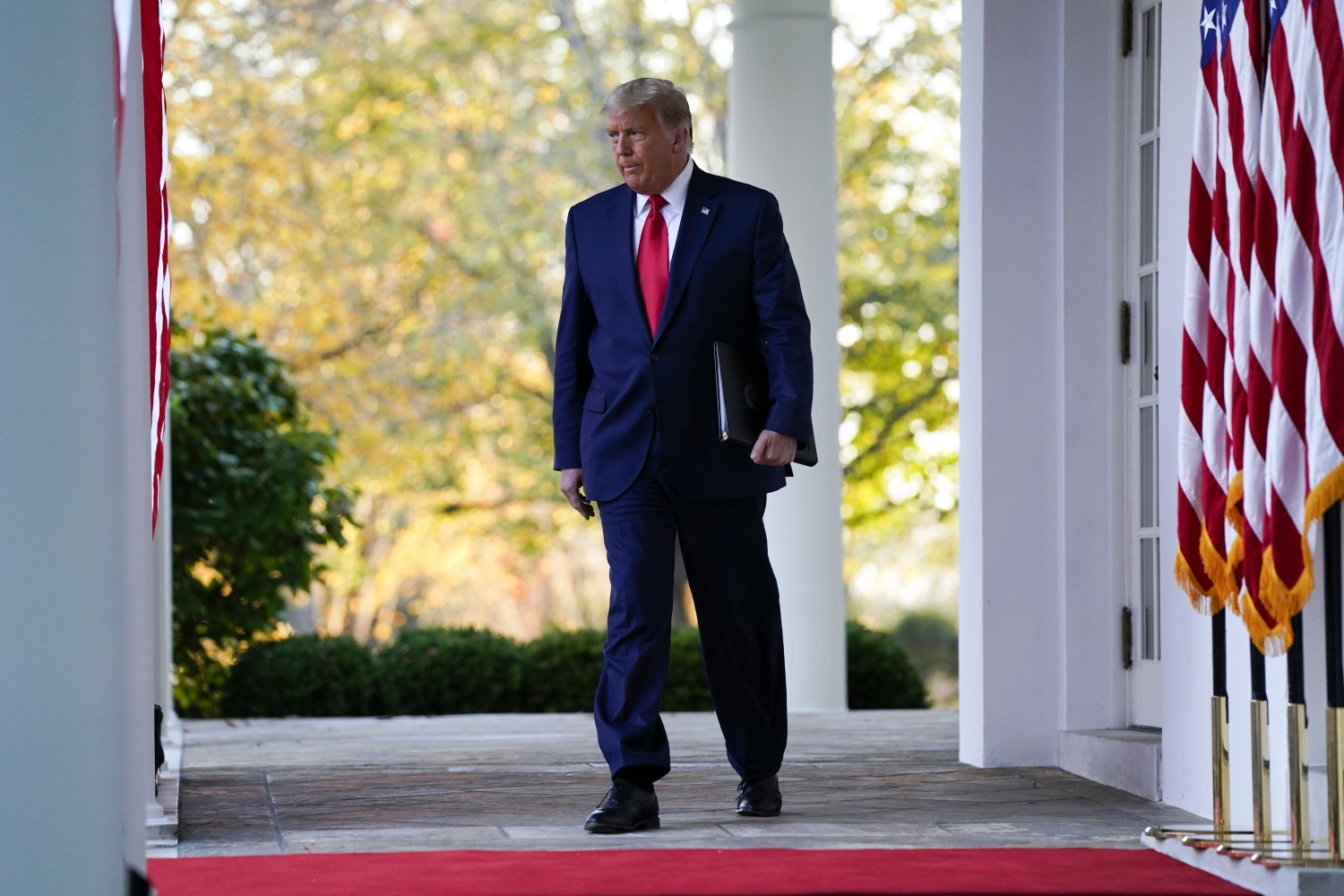 Speaking publicly for the first time since losing the election, President Trump on Friday took credit for a promising coronavirus vaccine while ignoring the escalating death toll as the pandemic tears through the country faster than ever before.

The lame-duck president spoke in the White House Rose Garden just after media outlets called the election results in the final two states — Georgia for President-elect Joe Biden and North Carolina for Trump — bringing the projected electoral college vote to 306-232 for Biden. Four years ago, Trump was on the winning side of an identical election day margin.

The president, who with his allies has continued to allege vote fraud without providing evidence, did not address the election outcome or take questions from reporters. Instead he focused on the potential vaccine, which, if approved for distribution, could be administered to older Americans starting in December and become widely available by April, according to the president and his administration.

“No medical breakthrough of this scope and magnitude have ever been achieved this rapidly, this quickly,” Trump said. “We’re very proud of it.”

Even as he celebrated, Trump attacked Pfizer for noting that its vaccine-development effort was independent of the government’s Operation Warp Speed, and slammed New York Gov. Andrew Cuomo for setting up a separate state review system to ensure a vaccine’s safety. The president suggested that would delay how soon New Yorkers can get the vaccine.

“We won’t be delivering it to New York until we have authorization to do so,” he said. Cuomo blasted Trump in a subsequent appearance on MSNBC: “He uses the government as a retaliatory tool. That’s what he does.”

Pfizer announced at the beginning of the week that its vaccine candidate appeared to be 90% effective at preventing COVID-19, and other pharmaceutical companies are developing their own versions.

More than 244,000 Americans have died from the disease, and an average of more than 1,000 are dying every day. But Trump has focused almost exclusively on vaccine development rather than advocate for restrictions on gatherings or business that could limit the spread of the virus.

In contrast, President-elect Biden, who made containing the pandemic a centerpiece of his campaign, said the country needs “a robust and immediate federal response.”

“I am the president-elect, but I will not be president until next year,” he said. “The crisis does not respect dates on the calendar; it is accelerating right now. Urgent action is needed today, now, by the current administration — starting with an acknowledgment of how serious the current situation is.”

Biden said Americans need to continue social distancing, washing their hands and wearing masks to limit the spread of the virus.

Trump, rather than concede the race, has instead vented for days on Twitter, spreading conspiracy theories about computer software changing vote totals and falsely accusing Democrats of rigging the election.

During his remarks, Trump at one point seemed about to acknowledge Biden’s victory by urging the next administration not to lock down the economy to stop the coronavirus. Catching himself, Trump added, “Who knows which administration it will be. I guess time will tell.”

Trump and Republicans have been challenging the results in several states, but none of those efforts have suggested wrongdoing on a scale that would change the election results in those states and judges have been openly skeptical of the Trump campaign’s cases.

The campaign withdrew one suit in Arizona because the number of disputed votes was insufficient to overcome Biden’s lead. In Michigan, a judge harshly rejected Republicans’ request to block certification of the vote, calling the allegations “incorrect and not credible.” And in Pennsylvania, the law firm representing Trump said late Thursday it would no longer handle a federal lawsuit there; Biden leads by about 63,000 votes and Pennsylvania’s secretary of state said Friday there would not be a recount.

Trump allies are continuing to push on other fronts, including in Georgia, which will conduct a recount. Biden won a narrow victory — a breakthrough in a once reliably Republican state.

Marc E. Elias, a Democratic election law expert who worked with the Biden campaign, said he was confident that the Georgia recount, which is due to be completed Wednesday, would not change the outcome. “Ballots will be recounted, the totals will remain largely the same, and that will put that to rest,” he said in a conference call with reporters.

Biden is pressing ahead with policy and personnel planning, including low-key outreach to Republicans. But his advisors are expressing growing concern about Trump’s decision to block much of his administration from cooperating with his successor’s transition team.

Trump officials have refused to give Biden access to the daily intelligence briefings usually provided to a president-elect, or to provide funding through the General Services Administration that typically goes to the election winner to cover transition costs from office rental to supplies.

“We’re not interested in having a food fight with the GSA administrator or anyone,” said Jen Psaki, a Biden transition advisor, in a news briefing Friday. “We just want to get access to intelligence information, to threat assessments, to the ongoing work on COVID so that we can prepare to govern.”

Even Trump’s own former chief of staff called on the administration to give Biden access to national security and intelligence information.

“You lose a lot if the transition is delayed because the new people are not allowed to get their head in the game,” John F. Kelly said Friday in an interview with Politico. “The president, with all due respect, does not have to concede. But it’s about the nation. It hurts our national security because the people who should be getting [up to speed], it’s not a process where you go from zero to 1,000 miles per hour.”

In the first week since the race was called for Biden on Nov. 7, he has taken several steps to move forward on transition planning.

He named Ron Klain, a longtime advisor and veteran Democratic strategist across more than three decades, as White House chief of staff. He formed a task force to develop plans for confronting the coronavirus crisis once he is sworn in. He announced dozens of people to help plan the transition at major agencies. And he has taken phone calls from numerous foreign leaders, and consulted with Democratic leaders in Congress.

In an interview Thursday on MSNBC, Klain said Biden had also been consulting with Republicans, but would not name them. One contact Biden has made is Sen. Susan Collins of Maine, who won a hard-fought battle for reelection in the face of fierce Democratic opposition. A Collins spokeswoman said Biden called her last week to congratulate her on her victory, a call first reported by Politico.

Klain and Psaki both said that Biden had not yet talked to the Republican who is likely to be his biggest obstacle in Congress, Senate Majority Leader Mitch McConnell of Kentucky. Biden and McConnell served in the Senate together for years, and, while Biden was vice president, they negotiated some major legislative deals. But McConnell has not yet acknowledged Biden’s victory, backing Trump in his refusal to concede.

Psaki said there was no rush to get them together. “Whenever they do engage they won’t have to play a lot of catch-up,” she said. “They probably know each other’s family members’ names.”