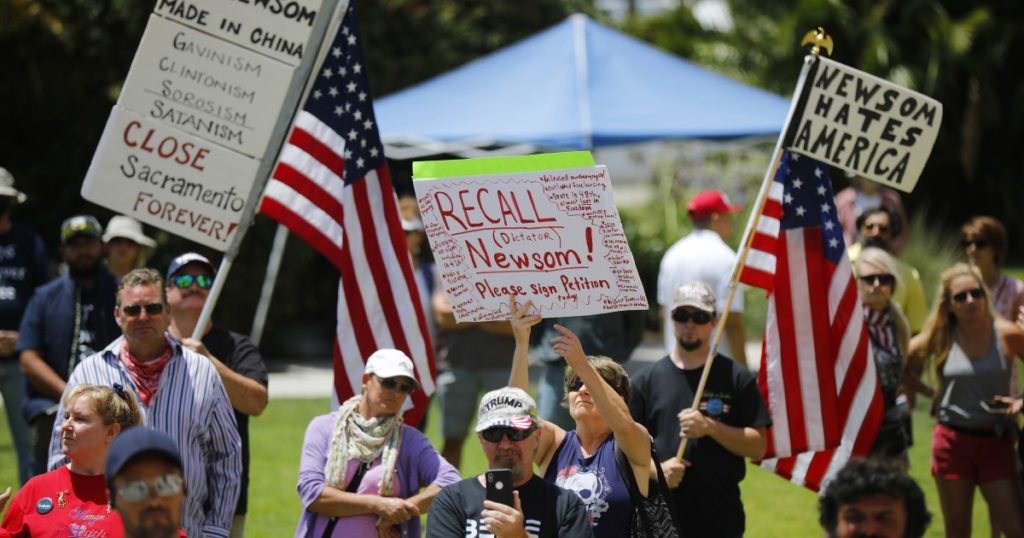 As the pandemic continues to shutter businesses, close schools and upend lives in California, Gov. Gavin Newsom has become a target of angry frustration for some, driving a grassroots effort to recall him from office. What once started as a pipe dream is beginning to look like a political threat for the Democratic governor.

But a Times investigation found that recall campaign leaders, seeking to capitalize on the darkening public mood, allied with radical and extreme elements early on to help collect signatures. Those included groups promoting distrust of government, science and medicine; peddlers of QAnon doomsday conspiracies; “patriots” readying for battle and one organization allied with the far-right extremist group, the Proud Boys.

The recall gave those fringe factions a higher profile and a shared villain. They helped energize the campaign with large and often inflammatory rallies over masks, in support of Trump and against the election they falsely say was stolen from the former president — ripe venues to harvest petition signatures.

Many supporters of the recall are not extremists and may not be aware of the far-right groups involved with the effort. But with the violent insurgency at the U.S. Capitol on Jan. 6, organizers are grappling with the consequences of their alliances. They now insist the extremists don’t represent the values of the recall movement but continue to associate with them, amid a national debate about how far is too far when it comes to winning in politics.

“Do we have to denounce everybody that is involved to move it forward?” the official proponent of the recall drive, a retired sheriff’s sergeant from Yolo County named Orrin Heatlie, asked The Times.

“Or do we just move forward and ignore those other elements?”

Behind the momentum that Heatlie would now look past, The Times found:

Recall officials, including Heatlie, all said it is unfair to hold the campaign accountable for the individual actions of its volunteers and supporters, and they are unable to monitor where signatures are gathered.

“You cannot control a movement,” said Randy Economy, a veteran political consultant who is the recall’s senior advisor and chief publicist. “It’s not our job to manage what somebody says about the recall at a public event.”

Economy said more than 1.2 million Californians have signed the petition to remove Newsom. As of Jan. 6, state elections officials said 723,783 signatures have been turned in by the recall campaign and of those, 485,650 have been verified. The campaign needs to turn in almost 1.5 million signatures by the March 17 deadline, though far more will likely need to be collected to mitigate for those proved invalid.

Many of those signing are fed up with coronavirus testing problems and disarray around lockdown rules and data, slow vaccine access and Newsom’s now-infamous dinner party at the French Laundry without the masks that other Californians were told to wear, Economy said.

Heatlie said his organization cut ties with at least one of those early partners, the Freedom Angels, and is careful about connections to groups with far-right views such as science deniers. Yet, The Times found recall signature gatherers continue to frequent such events.

Last weekend, the recall participated in a “Free and the Brave” Yuba County event featuring false claims about the virus and a silent auction for militia training.

The Church of Glad Tidings hosted the three-day conference against pandemic restrictions, and there were no masks in sight. One of the recall’s earliest regional organizers, Donna Wahlberg, was excited to set up her petition table inside the church where speakers advocated defiance of COVID-19 health orders and claimed that wearing masks was more dangerous than the virus.

Outside the church, thick-muscled men in tactical vests protected those attending with an arsenal of pepper ball guns, pepper rifles and Tasers. A trio of sheriff’s cars sat down the road.

Wahlberg said she promoted the conference on official recall web sites to tens of thousands of subscribers across California.

“We wanted as many people statewide [as possible] to attend this,” said Wahlberg, festooned in lively accents of red, from her brightly lacquered toenails to the turban wrap crowning her head. She is a Yuba County web administrator for the recall campaign, and before that, worked with Heatlie on a prior Newsom recall effort.

Heatlie said he was unaware his campaign had promoted the conference on its social media, but because there are so few large events to collect signatures at during the pandemic, there “might be a certain level of acceptance for certain gatherings.”

Heatlie also said he monitors all of his organization’s Facebook pages and has rules forbidding posts about federal politics or personal views, though the The Times found multiple examples of such messaging across groups. Some included misinformation from QAnon — a nonsensical mythos that Trump was fighting a secret war with deep state occults who traffic children, and would declare martial law with executions.

These include posts from San Diego that carried the QAnon motto, W1GWGA (where one goes, we go all). Other posts depict Newsom as Adolf Hitler and compare pandemic restrictions to the rise of the Third Reich.

That imagery is characterized as hate speech by the Anti-Defamation League, but for months, the image of Newsom as Hitler has been prominent at rallies, and the theme was adopted by a San Diego recall organizer to announce petition signings.

One politician who stands to benefit from Newsom’s ouster is John Cox, a San Diego-based venture capitalist and Republican gubernatorial hopeful who has already contributed $50,000 to the recall campaign and $1 million into his own gubernatorial exploratory committee. Cox said he was unaware of the role extreme groups have played in helping the recall gain momentum. He minimized the prevalence of such factions in the campaign, attributing them to “a couple of people who were unhinged.”

Cox said he found the Holocaust imagery of Newsom objectionable. “You’ll never see me inciting anything like that.”

“If you really believe your political opponents are Satan-worshiping pedophiles, you can be justified in using any weapon against them,” she said.

Strident language has become more common in the recall as the pandemic progresses, with the Freedom Angels one group turning up the temperature. The group first gained prominence in California opposing laws that require vaccinations for public school attendance, which they claim is an overreach of government authority. With the pandemic, two leaders of the Freedom Angels splintered off to join those opposed to COVID-19 closure and stay-at-home orders.

Aguilar, one of the founders of the offshoot group, is also a supporter of the Proud Boys, appearing at one Capitol rally wearing a shirt with a patch that read, “I (heart) Proud Boys” and at another introducing group members as security. Since the election, Proud Boys have fought with antifa counter-protesters during at least seven Capitol rallies, according to Sacramento police, and 27 people have been arrested or cited.

In a Dec. 13 Facebook post, Aguilar wrote, “I will have their back to the fullest and will not be shy about my support for my PB’s.”

Heatlie said he became concerned about the Freedom Angels in May, after an unruly Capitol rally in which 32 people, including Aguilar and Thornton, were detained by the California Highway Patrol. But despite his misgivings, Heatlie agreed to appear on a Freedom Angels webcast in June, on the day the Secretary of State’s office approved his petitions for circulation. And later in the month, Heatlie’s recall campaign called on supporters to attend a Freedom Angels rally at the Sacramento courthouse to support those who had been arrested during demonstrations.

Aguilar declined to speak to The Times about her organization’s alliances, saying the recall campaign reflects only the voices of those who sign the petitions, though she continues to promote it. Thornton did not respond to calls for comment.

Heatlie said he cut formal ties with the Freedom Angels in July, but acknowledged that signature gatherers continue to frequent events featuring or arranged by the group.

The recall also has not censured those within its own ranks.

Aaron Bate, an El Dorado County recall organizer who with Heatlie was part of an earlier petition drive against Newsom, is active in the Three Percenters and has personally delivered thousands of recall signatures to his county election office.

On social media, Bate has posed with others flashing a Three Percenter hand sign, and with men in Proud Boys clothing flashing an OK hand gesture associated with their group and with white supremacy. Brian Levin, professor of criminal justice and director of the Center for the Study of Hate and Extremism at Cal State San Bernardino, described the Three Percenters as “an anti-government paramilitary group that promotes the idea that violence is legitimate to combat gun control laws.”

In an email, Bate disputed that characterization.

“The Three Percent Groups are not a Militia nor are they far right,” Bate wrote. “They are made up of people from all Races, Political Views and Professions. There are Vets, Police Officers, Doctors, Electricians, and many other Professions.”

Robin McCrea, chief financial officer for the recall and one of its founding members, posted memes and comments on a personal social media page disputing the election. “PEVERT (sic) Quid Pro Joe Corrupt Beijing Biden will NEVER be the President of Patriots…NEVER,” she wrote in one. Later that day, she posted false assertions that the Jan. 6 riot at the Capitol was the work of anti-fascist activists, another conspiracy theory that quickly took hold after the insurgency.

McCrea said via email that she stands by her views.

“I’ve seen on live TV the way Biden touches young girls. Would I want my child or a grandchild around him? No.,” McCrea wrote in an email. “Do I believe there was and is ample evidence to show the election results were not accurate? Yes … Do my views regarding national politics have a thing to do with the Recall of Newsom? No.”

Heatlie defended both McCrea and Bate. He said that being a member of the Three Percenters was not a reason to remove Bate from the recall organization.

“This is about recalling the government. It’s not about Aaron Bate or his personal views,” said Heatlie.

Heatlie said he was unaware of McCrea’s views and she had not shared them in official channels, but that her financial skills were valuable to the campaign.

“If [people] don’t want to sign the petition because Robin McCrea is on the board or the committee or part of the management team or part of the volunteer team, then I don’t know what to tell you,” he said. “She helped bring this opportunity to the people of California.”

Del Beccaro is a frequent contributor to the far-right Epoch Times, which has come under scrutiny for its far-reaching dissemination of pandemic falsehoods. In one piece, he asserted that the media has exaggerated what he called the “CCP virus” (Chinese Communist Party) as part of a scheme to enlarge government.

Del Beccaro’s committees are separately distributing petitions by mass mail, and he said he is unaware of Heatlie’s connections. But he also characterized those elements as irrelevant.

If the recall does qualify for the ballot, it would trigger a special election this year. Unlike a regular vote for governor, the recall ballot could see multiple candidates — with the winner simply needing the most votes.

Last week, California Democrats attempted to brand the Recall Newsom campaign as an “attempted coup” akin to the Capitol insurrection — an effort that backfired, with critics saying it was reckless to characterize a legal recall attempt with what happened on Jan. 6. But one prominent Republican analyst said few should be shocked that the recall has extremists and conspiracy theorists.

“It used to be low taxes,” Madrid said. “It is now White grievance.”