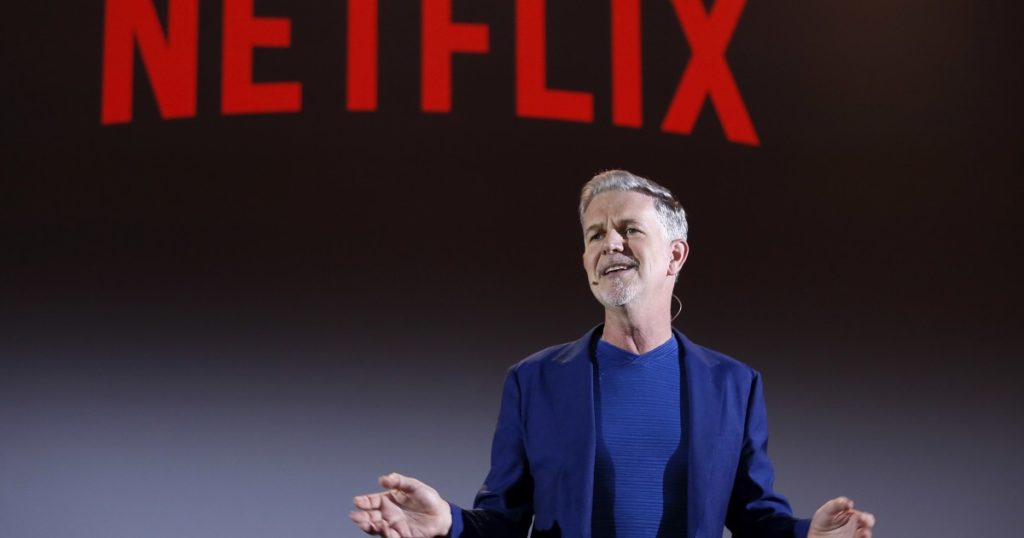 In the jockeying among California political donors to support Gov. Gavin Newsom’s fight against the recall, Netflix co-chief executive Reed Hastings is near the top of the leader board — with one expensive mea culpa.

The $3.1 million in contributions Hastings and his wife, Patricia Quillin, have given Newsom comes as part of a political reconciliation of sorts with the governor after the Silicon Valley executive supported Newsom’s opponent Antonio Villaraigosa in the 2018 gubernatorial primary.

“If I was advising Reed Hastings, I would have advised him to do the exact same thing,” said Mike Madrid, a political consultant who has advised Villaraigosa. “He’s dealing with a sitting Democratic governor. He played against him in the [2018] primary. I think it’s a wise move and a wise consideration to say, ‘I’m going to be behind you.’

The former president of the State Board of Education, Hastings is known in California politics as a proponent of education reform and has tapped into his $5 billion net worth to help elect like-minded pro-charter school candidates to state and local public office.

At the state Capitol, the streaming giant he co-founded has dispatched well-connected lobbyists to look after its interests, which in recent years has included efforts to refund or sell tax credits that the company received from the state but can’t use due to its limited tax liability in California.

Quillin also has become a major donor to ballot measure campaigns tied to her social and criminal justice advocacy work.

Madrid and others consider it a no-brainer for the wealthy political activist and businessman to back Newsom, an incumbent with no other viable Democrats on the ticket to replace him. Even so, Hastings had chosen to go against the politician in the past, when many viewed Newsom as the heir apparent to the governor’s office.

Hastings’ reconciliation campaign began the night of the 2018 primary when Villaraigosa, who he supported to the tune of $7 million, came in third behind Newsom and Republican John Cox, garnering just 13% of the vote.

Though Newsom had supported the charter school model as mayor of San Francisco, Hastings and other wealthy charter school advocates made a risky $23-million bet to back Villaraigosa, who fought with teachers unions and tried to take control of Los Angeles Unified School District during his time in the Los Angeles Mayor’s Office.

Hastings sent Newsom a congratulatory text, calling him a “star” and saying, “If you’ll still have me, I’d be honored to support you,” according to a profile of Newsom in the New Yorker, which detailed the exchange from a stream of texts he received on the night of the primary.

Newsom offered Hastings a cordial response and accepted $29,200 from him later that month, but the election had gotten ugly. The then-lieutenant governor told reporters he was surprised by the negativity of ads funded by charter school backers, which criticized his work ethic and sought to cast him as a dilettante. Newsom said at the time that the ads “misrepresented my 20-year record” and didn’t make his relationship with charter supporters any stronger.

A little over a month after he took office the following year, Newsom fast-tracked legislation to require charter schools to adhere to new transparency standards, making good on a campaign promise to ramp up oversight. Then-CTA president Eric Heins said at the time that Newsom’s action marked the beginning of a “ground shift” given that prior governors had vetoed similar legislation.

“Reed’s put as much time, energy and dollars into trying to improve public education for low-income kids as anybody I know,” Tuck said. “I was not the least bit surprised that he would come in big for this recall election.”

Through Netflix, Hastings declined an interview request for this story.

Though charters have lost some battles to unions at the state Capitol since Newsom took office, some of Hastings’ other interests have experienced more success.

Less than two months after Hastings gave a single $3-million donation to the anti-recall campaign in May, Newsom signed a budget bill that created a new program that could allow the Los Gatos-based streaming giant to qualify for millions in state grants.

It’s unclear how much Netflix pays in taxes in California, where corporations are not required to publicly disclose that information.

But Netflix wrote in its annual report that as of Dec. 31, the company “had a California research and development credit carry forward of $250 million” and predicted some of its credits would not be realized.

For years, Netflix and other mega-studios unsuccessfully lobbied state lawmakers to change state law to allow them to refund unused tax credits from the state or sell them to other businesses, according to state filings and interviews with legislators, Capitol staff and lobbyists. But lawmakers balked at the idea of paying companies for unused tax credits when they have little to no tax liability in the state.

With a push from Netflix, a plan emerged in 2020 to expand the California Competes Tax Credit, a program intended to keep or attract businesses in the state and to allow media production companies to refund unused tax credits and use the money to build local infrastructure.

The legislation, which was introduced just days before the Legislature adjourned for the year, would have allowed “a taxpayer with little-to-no income tax liabilities but significant other state tax liabilities to benefit” from the credit, according to a legislative analysis of the bill.

The legislation failed and Newsom introduced a modified version of the 2020 proposal in a budget plan he unveiled in January, this time creating the California Competes Grant Program to allow the Governor’s Office of Business and Economic Development to award grants to qualifying businesses in exchange for commitments to hire workers or build infrastructure in the state.

The Legislative Analyst’s Office, a nonpartisan arm of the state Legislature that provides lawmakers fiscal and policy advice, suggested that lawmakers oppose the early version of California Competes Grant program proposal in an analysis of Newsom’s January budget proposal.

“California Competes is not a suitable vehicle for addressing the economic effects of the pandemic because it does not target the hardest-hit industries,” the LAO wrote in a report, instead suggesting the money be targeted to small businesses. “The idea of adding grants to California Competes raises questions that require significant Legislative deliberation.”

The final version Newsom signed in July gave $120 million to the new grant program, which “focused on businesses that, due to insufficient tax liability, are unable to benefit from the CalCompetes Tax Credit,” according to a Department of Finance overview of the legislation.

While many business struggled in 2020, Netflix boomed when stay-at-home orders created a captive audience for the streaming giant. The company added 36.6 million subscriptions and reported $25 billion in revenue globally.

Netflix’s state lobbyist employer filings show the company hired a bevy of well-connected Sacramento operators while it lobbied the governor’s office and the Legislature on tax issues, including a firm run by Newsom’s friend and advisor Jason Kinney and another at which the husband of the chief deputy of policy at the Department of Finance is a partner.

Hastings’ wife is also said to be a driving force behind their political giving.

Quillin is active in state politics and gave more than $3.7 million in 2020 to successfully oppose an initiative to toughen criminal sentences and limit parole, to back a measure that allowed people on parole for felony convictions to vote, and to support failed ballot measures to abolish cash bail and restore affirmative action.

“Patty is very passionate about criminal justice reform and social justice issues,” said Brian Brokaw, a Democratic consultant who has been part of multiple campaigns funded by the couple and also works with Newsom. “I think they’re both very supportive of Newsom for different reasons.”

Those close to Newsom say Hastings’ backing did more than boost the governor’s campaign coffers: His money also sent a message to other Democrats who were quietly considering joining the race in the spring.

By winning over one of California’s wealthiest donors and a former political adversary, the same deep well of funding that had been available to the governor’s intra-party rivals in the past wouldn’t be up for grabs this time around.

“Our campaign has a broad coalition of support,” said Nathan Click, a spokesman for the anti-recall campaign. “Democrats are getting activated to vote no and defeat this Republican recall.”