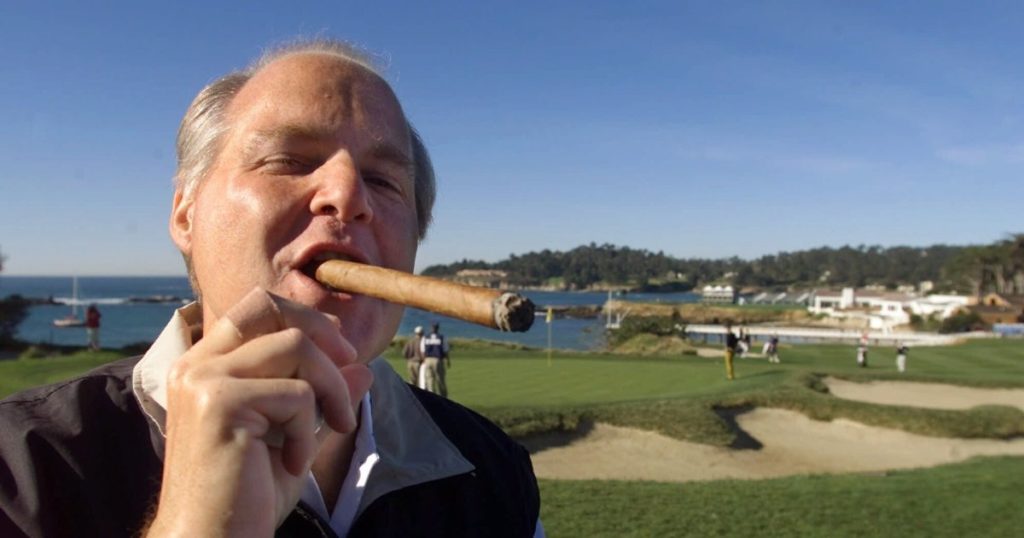 What is the appropriate response when someone who spent his life attempting to exploit and aggravate the political and social divisions of a nation dies? However the life of a professional divider is cast, any depiction or consideration will be greeted by howls of outrage from one side of that divide or the other.

To his many fans, Rush Limbaugh via his radio program was an early and dependable voice of reactionary conservatism. His raging contempt for any form of progressive politics was their raging contempt for any form of progressive politics. His willingness to insult individuals, particularly women, with terms like “dogs,” “slut” and “feminazi,” was just a gleeful bonus. His ability to spot liberal conspiracy in virtually every cultural and political development was a God-given talent, his willingness to twist fact into falsehood simply a necessary corrective to the liberal agenda that the mainstream media was shoving down everyone’s throat.

To his many detractors, Limbaugh was the devil, a corruptor of minds who catered to his listeners’ darkest impulses, a small star in a dying universe who turned his fortunes around by validating and exacerbating bigotry — a showman who leveraged economic, racial, ideological and geographic differences to create a system of Us vs. Them that damaged families, political parties and this country.

No matter which side you fall on, there’s no denying that Limbaugh was an early architect of the landscape in which every event is refracted through politics, where “fact” can be easily dismissed as “interpretation.”

No matter which side you fall on, Limbaugh paved the way for a baseline of incivility that has been normalized in political discourse.

No matter which side you fall you, Limbaugh helped to turn the public discourse in one of the most diverse and successful nations of the world into a competition between two teams: Red vs. Blue, liberals vs. conservatives. Us vs. Them.

His tools were limited — contempt, anger, outrage — but he wielded them like a master, whipping up fervor in both fan and detractor alike. He hosted, for a time, the most popular talk-radio program on the air, but still it was talk radio, which meant the vast majority of Americans never listened to him. Even so, they knew who he was; Limbaugh baited the mainstream media and the mainstream media bit. Time and time again.

Over the years, Limbaugh’s ratings and notoriety rose and fell with his willingness to be incendiary. Many were enraged by his provocations and pronouncements but only once, when sponsors pulled away after he called college student Sandra Fluke a slut for suggesting that insurance pay for birth control, did he actually damage his brand. And actually apologize.

The notion that conservatives in the greed-powered 1980s needed a voice seemed, to liberals anyway, laughable, given the many already existing conservative pundits, not to mention the continued control of state and federal government by Republicans. “The Rush Limbaugh Show” became syndicated in 1988, during Ronald Reagan’s presidency, and it’s difficult to understand how the party of Reagan, followed by George H.W. Bush and later his son, could have felt the need for Limbaugh’s voice in particular.

But that is the argument Limbaugh made, and it stuck — in 1994, Newt Gingrich would superglue the Republican party to Limbaugh’s message and persona by calling the newly GOP-majority House the “Limbaugh Congress.” Limbaugh’s success, at a time when radio was entering what many considered its death spiral, did what all successes do — it spawned copycats. The current combative state of cable news, and indeed the news media as a whole, is the result of many powerful factors, including the very real need to compete for eyeballs, but it is safe to say that without Limbaugh there would be no Fox News and all that its ascendance implies.

What that implies is, among other things, a general, widespread suspicion and fear of the media; the use of false equivalencies in place of actual fairness; the increasing tolerance of reactionary groups, including the Ku Klux Klan and neo-Nazis; an over-reliance on opinion and spin, and a common belief, on both sides of the political spectrum, that if you are not with me, you are out to get me.

When, during his early years, he was dismissed by mainstream media as being crazy, Limbaugh did what many successful people do — he leaned into those dismissals and courted the crazy. Like former President Trump, who followed much of Limbaugh’s template, Limbaugh delighted in saying things that no one else would say publicly, much less broadcast on the radio, and his fans delighted not only in the things he said but also in his willingness to say them. In the name of conservatism, he openly exploited the suspicion many people have for government, liberal-leaning government in particular, but he also offered validation for open and latent racism, sexism and homophobia.

More than that, he leveraged the genuine bewilderment many feel as they realize that life is changing in ways they do not like, or that people or circumstances are not quite as they believed them to be, and transformed that bewilderment into rage.

He most certainly benefited from the fact that he was, for many years, something of a lone voice, but he was also very, very good at what he did.

People loved him. Many millions of people.

So what is the appropriate reaction to his death? Exactly what it has been — absolutely and predictably divided along political lines. Conservatives called him a trailblazer, a fighter, a true patriot and the voice of their movement. Liberals called him a bigot, a sexist and a partisan propagandist with a profoundly mean streak. The choice to praise or condemn him has become yet another Rorschach test of political team loyalty; the decision to stay silent has proved equally offensive and obituaries were immediately parsed for, depending on the parser, hypocrisy and bias. Everyone was outraged. Just the way Limbaugh liked it.

In a way, the response to his death was the perfect tribute to his life. One can only hope this divisive final chapter for Limbaugh will end soon and mark, as deaths often do, at least the beginning of the end of an era.