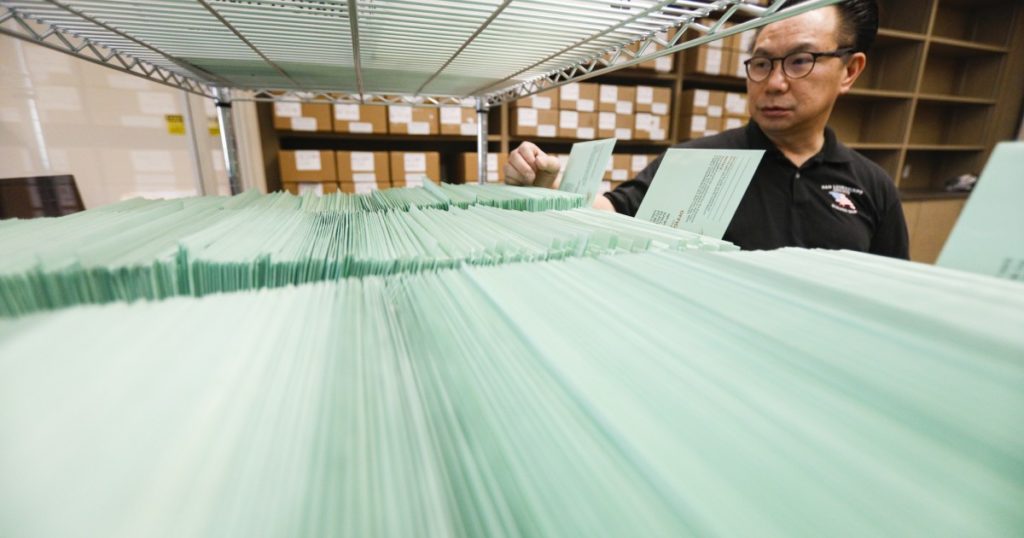 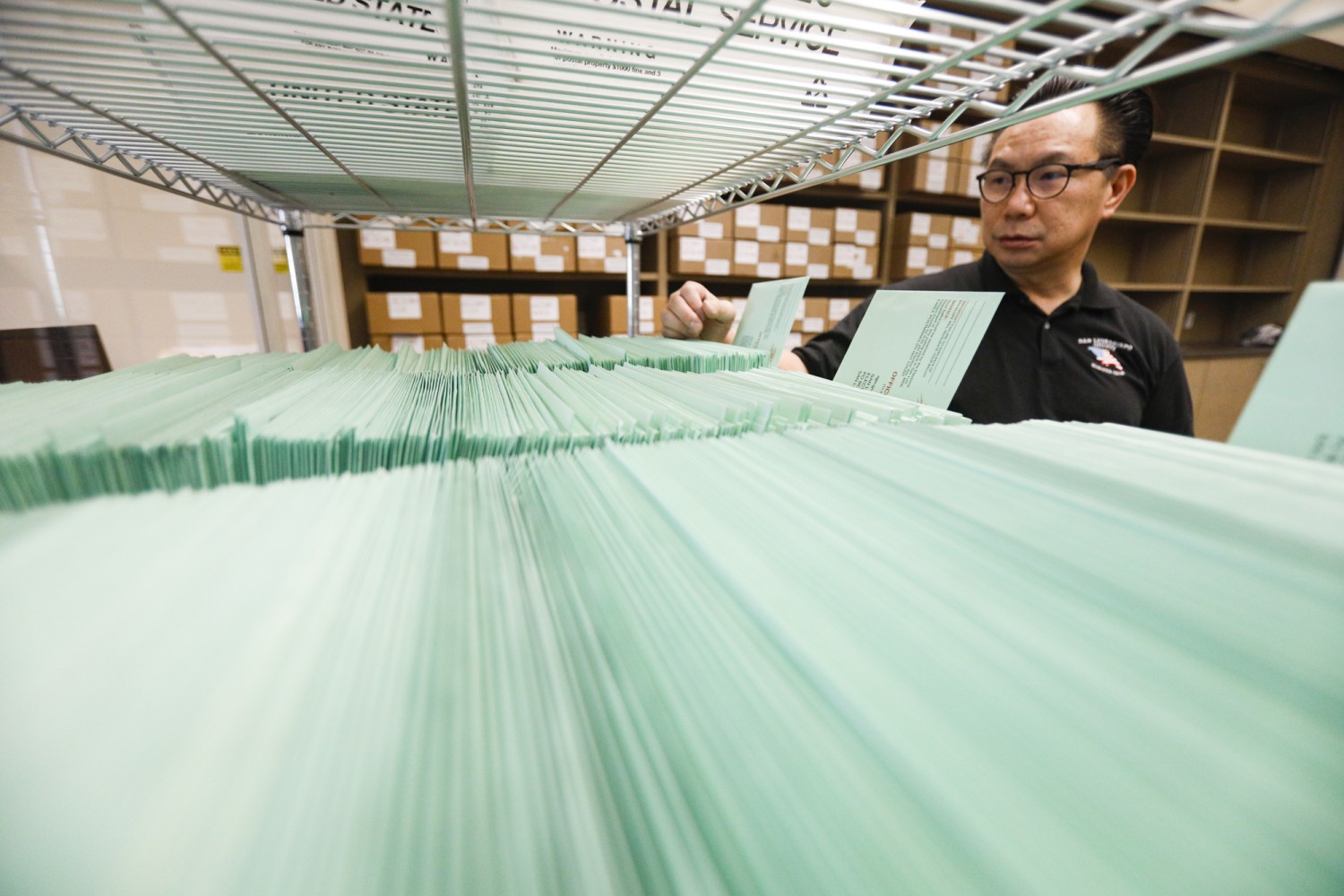 The Big Lie — the fiction that the 2020 election was riddled with fraud, costing President Trump a second term — has spread like a cancer.

In Phoenix, Republican state lawmakers caved to the GOP’s lunatic wing and approved a harebrained canvass of Maricopa County ballots. Emboldened Trump backers are now challenging election results in Georgia, Michigan, Pennsylvania and elsewhere. (Not that it will change anything.)

In California, the nuttiness has spread to San Luis Obispo County, the midpoint between San Francisco and Los Angeles, where the denialism took an ugly, racist turn.

President Biden easily defeated Trump in the county, 55% to 42%, a margin of nearly 21,000 votes. That’s no cliffhanger.

“Joe Biden won the election,” county Supervisor John Peschong states without equivocation. He’s no Democratic shill. His Republican credentials include service in the Reagan White House and decades as a GOP campaign strategist.

Biden’s victory was also confirmed by a partial hand recount, a standard practice under California law.

Still, at a board of supervisors Zoom meeting in early May, nearly 150 people pressed baseless assertions of fraud and questioned the use of Dominion voting machines. The technology firm has faced some of the more fantastical claims by Trump and his sympathizers. Many protesters expressed doubt their votes were counted, or claimed balloting machines were manipulated to change results.

(A number of them seemed be reading from a script and calling from outside the county, judging from their pronunciation of San Luis Obispo.)

Much of the criticism was directed at the county’s chief elections official, Tommy Gong, who has worked more than 15 years in the nonpartisan clerk-recorder’s office.

“Tommy Gong is using every excuse available to prevent an audit,” said one caller to the board’s comment line.

“We want Tommy Gong to remove [the voting machines] and also have them audited,” said another. “If not, we need to have Tommy Gong removed.”

The attacks scraped bottom when a woman asked, “Is Tommy Gong in any way in relationship to the Chinese Communist Party?”

The short answer is, no. Gong is, in fact, a third-generation American.

But the question combined two of the toxins running through our political and cultural bloodstreams: the Big Lie and rising hatred toward Asian Americans.

“It’s disturbing and worrisome that a comment like that would come out of the blue,” Gong said of the thought he might be a Chinese agent, bent on sabotaging democracy in a bucolic slice of the Central Coast. “You wonder what’s the basis of that, other than the color of my skin and my last name.”

Disturbing but not surprising. Conspiracy and prejudice both spring from the same dark soil; one of the wacko theories being pursued in the Phoenix recount is conjecture that tens of thousands of illegal ballots were airlifted into the country from Southeast Asia.

Gong, 55, comes from a small town in the Central Valley, where his family owned a grocery store. He helped after school and on weekends and took over the business as an adult. He sold it in the early 2000s when a wave of consolidation hit grocers in the area.

Seeking a new career, Gong heard about an opening in the Stanislaus County clerk-recorder’s office. He’d been fascinated by the 2000 presidential race, which extended weeks past election day amid legal wrangling over recounts and “dimpled” chads. (Chads are the little things you poke out on a paper ballot.)

Gong was hired in 2003 and helped oversee the gubernatorial recall as his first election. Two years later, Gong assumed the No. 2 position in the clerk-recorder’s office in San Luis Obispo County. He was elected to the top job in 2014 and reelected four years later with nearly 100% of the vote.

In a lengthy interview, Gong detailed the steps taken to ensure the integrity of November’s balloting. He said no one questioned the results during the canvassing period that followed, the only time state law allows for such a challenge. With the results certified, it’s now too late for a recount or audit.

“It’s kind of hard to understand why all of a sudden this became an issue, other than what’s been taking place across the country,” Gong said, alluding to the Trump-led attempt to overturn the outcome without ever mentioning the former president by name.

He seemed at pains to avoid partisanship and expressed no hostility toward Trump or his followers. As the county’s keeper of records — birth and death certificates, marriage licenses, election results — his job is to follow the guidelines that others establish, Gong stressed. He wanted people to appreciate that fact.

“I don’t develop policy,” he said. “I execute elections according to the laws that are set before us. We’re not making up the law as we go along.”

“It’s really unfortunate,” he added, with admirable equanimity, to be caught in the political crossfire.

It’s unfortunate, too, that anyone would question Gong’s honesty and integrity based on nothing more than his name and ancestry.

Gong was born and bred in California. He’s raised his family here. He has uncles who fought for America in the Korean and Vietnam wars.

“He’s a true public servant,” said Peschong, the county supervisor. Others from the community have sent Gong similarly appreciative emails or handwritten notes of support.

Every Memorial Day, for the last several years, he and his two sons have played taps during ceremonies at the veterans memorial in Atascadero.

Gong plans to be there again Monday.