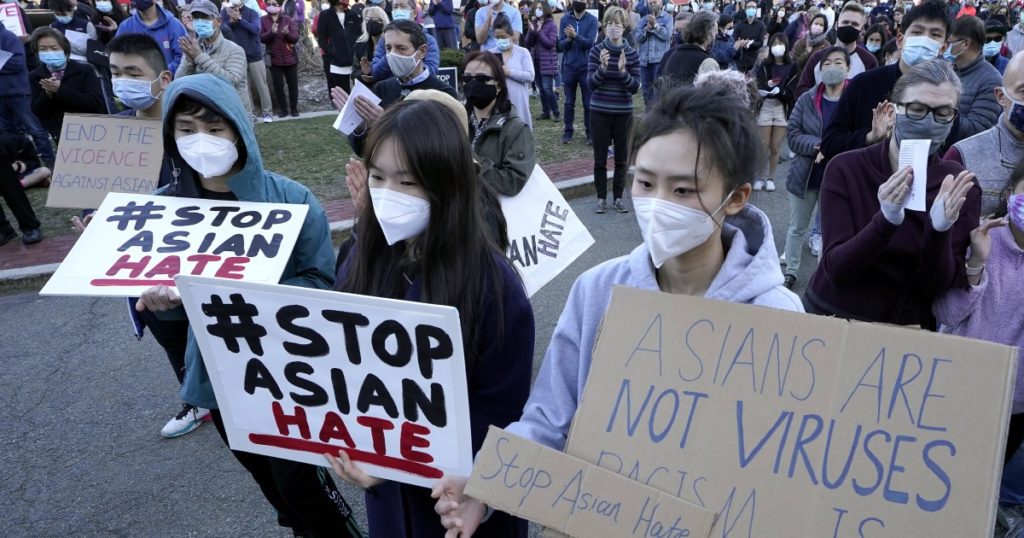 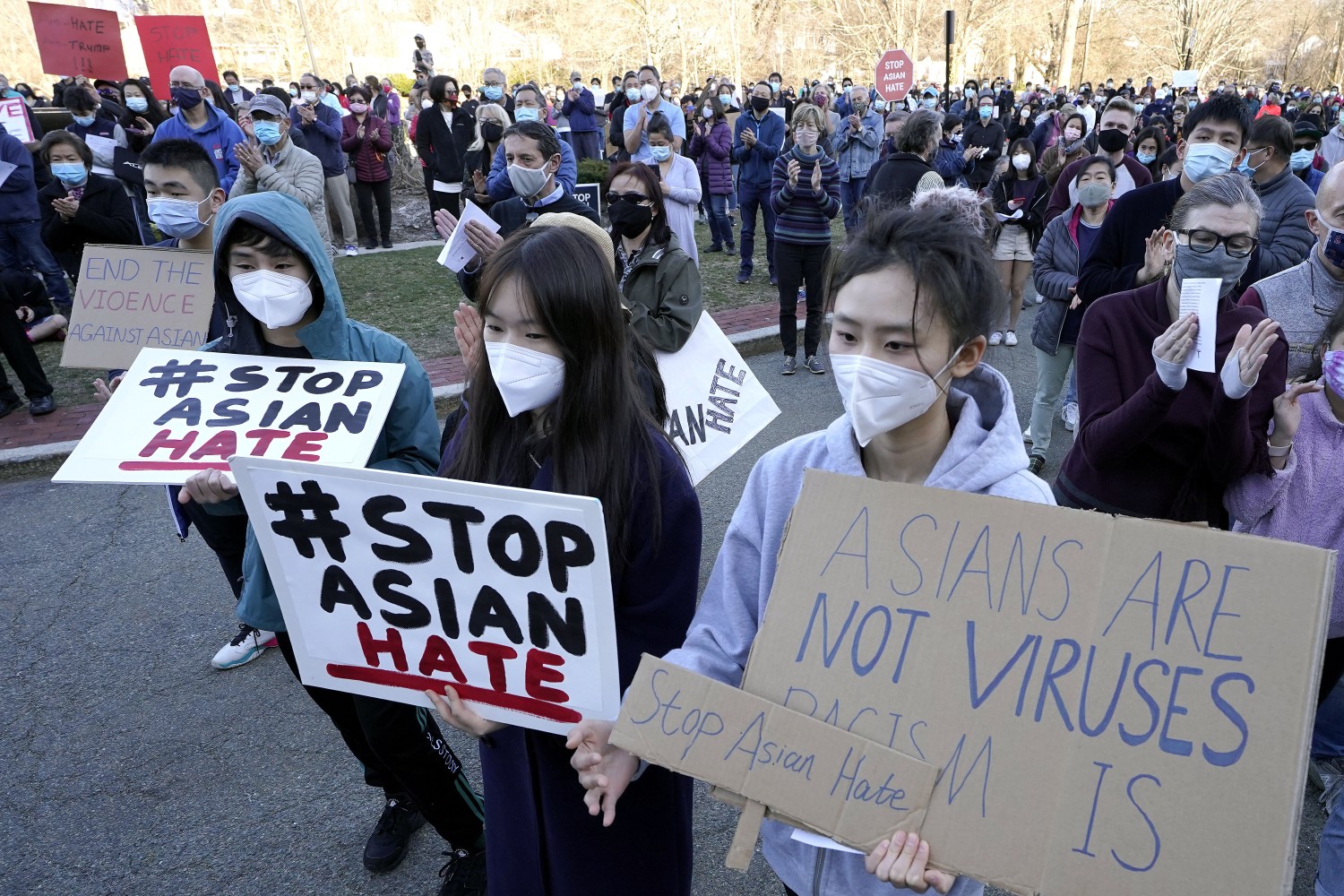 Experts on extremism are warning about a troubling shift in the right-wing QAnon movement toward a new vein of conspiracy that blends anti-Chinese and anti-Jewish tropes with fears of vaccines and a global plot to take over the world.

It marks a shift from the wild lies the movement spread before the election and in subsequent efforts to keep former President Trump in office, even after he lost to Joe Biden. Finkelstein and others said the switch, and the emphasis on suspicion toward Asians and Jews, could lead to more violence.

“That is what I worry about,” said Cynthia Miller-Idriss, a professor at American University in Washington, D.C., who runs the Polarization and Extremism Research & Innovation Lab. “Individuals who are either unstable or have been really radicalized during a long pandemic.”

At the start of the virus shutdowns, said Finkelstein, much of the racially charged conspiracy dialogue centered around the virus originating in China and included “disgust” toward Asians, with leaders including Trump insisting on labeling it as the “kung flu” or “Chinese flu.”

Since the election, the anti-Asian sentiment has shifted to anxiety about worldwide dominance, specifically a communist overthrow of governments backed by Jewish people who control wealth. President Biden is seen as a pawn of these elites.

“The latest round seems to be motivated by the political dominance stuff,” Finkelstein said. “There is a huge component of this that China is taking over.”

“They are unifying under a giant umbrella of a common enemy. Sometimes it’s the Jews. Occasionally it’s the Asians, usually it’s the government,” Finkelstein said. “What is happening is they are fishing for different issues to cause violence with.”

Following the November election, Finkelstein, Miller-Idriss and other extremism trackers noticed a shift in memes and codes words used by conspiracy peddlers. They appeared to be seizing upon a decades-old fear that tumultuous events in people’s lives — such as the pandemic and its subsequent lockdowns — are part of a master plan to subjugate the masses and replace legal norms with the totalitarian rule of a select few.

Those who study extremism said the transition by QAnon story peddlers is expected, but also signals that lies, racism and propaganda in American politics will continue to have staying power.

It is a “large tent of distrust of government and authority” that allows for “a variety of followers who oftentimes have general fears and grievances but not necessarily more specific types of commonalities,” said Brian Levin, professor of criminal justice and director of the Center for the Study of Hate & Extremism at Cal State San Bernardino.

“It really creates an attractive opportunity for extremists to ensconce themselves into divisive, emotionally charged issues where they can focus on the grievances and the villain and not necessarily their own baggage,” Levin said. “QAnon is like a newt’s tail. It can constantly reconstitute itself.”

The QAnon reboot is “new words for old terms that have existed for quite a long time,” said Jason Blazakis, professor at the Middlebury Institute of International Studies and director of its Center on Terrorism, Extremism and Counterterrorism.

Globalist paranoia dates back to the 1960s and is built upon anti-Semitic ideas that go back centuries. The web of conspiracies gained popularity in the 1990s after then-President George H.W. Bush used “new world order” in a speech about the fall of Soviet communism, fueling anxiety about government overreach, a loss of liberty and gun rights. Where once conspiracy theorists looked to Russia as the enemy, they were suddenly left without a malefactor. They filled that void with an evil global cabal, Levin said.

Those fears of dark forces acting just out of sight were recycled in QAnon conspiracies from its start in 2017, when an anonymous poster known as Q began offering cryptic messages about secretive government operatives working against Trump. But QAnon quickly spun into the specific and fantastical, with the new world order ideas pushed to its outskirts.

Levin said conspiratorial politics are growing not just at the national level, but in state and local issues as well. Finkelstein’s group recently found that Southern California is “the hottest of hot spots,” when it comes to such conspiracy.

In late January, when protesters shut down the vaccine site at Dodger Stadium, his research team tracked a surge in online new world order activity, including posts tagged with #greatreset, #scamdemic and #agenda21, a theory based on a 1990s United Nations resolution that some consider proof of a plot to depopulate the Earth.

The reasons why some Southern Californians have latched onto new world order rhetoric are complex. Finkelstein’s organization found a correlation between places with high incidence of both Black Lives Matter activity and what he terms as pushback against it in the form of anti-mask, anti-lockdown rallies — a mix that fed new world order activity online. Los Angeles County had the greatest abundance of both types of protests, followed by San Diego and Orange counties.

“Where the Black Lives Matter protesters showed up, the quarantine became sort of a counter-cause,” he said. “This idea that ‘we are the ones being victimized.’”

Mia Bloom, professor of Communication at Georgia State University and an expert on QAnon, also pointed out that Southern California is a hotbed of wellness culture, where anti-vaccine sentiment has found a foothold. Last summer, conspiracy theories jumped to Instagram, she said, where women previously more interested in lifestyle content were drawn in, creating an unlikely bridge between liberal and conservative movements.

Levin, Blazakis and others said regardless of why they took hold, new world order theories will likely play a role if the state holds a recall election for Gov. Gavin Newsom this fall. Newsom is already being featured in recall-related memes that portray him as “puppet” of the Chinese Communist Party and complicit in the global takeover. At rallies, he has been portrayed as Hitler and called a tyrant.

Recall supporters have posted on Twitter with hashtags such as #nwo, #trumpsarmy and #Agenda21 among others. Another recall meme posted online showed Newsom with House Speaker Nancy Pelosi (D-San Francisco) with “Nuclear Powered Satan,” written below them. A commenter on an official recall Facebook page called Newsom an “idiot communist,” and a recall founder recently posted about “Beijing Biden.”

A recent analysis of articles by the Network Contagion Research Institute about the California recall for a six-month period from September through March found about 800 articles from just more than 300 sources. Of those sources, 177, or 57%, were classified as disinformation sites or uncategorized. That designation, said researcher Lea Marchl, usually means they cannot be trusted. Similar numbers held true when it came to videos about the recall.

“What’s driving the recall is not merely an honest difference on policy but something that is framed in a deeper and more dark matter,” Levin said. “I’m concerned that people with legitimate, fact-based reasons for wanting to recall the governor are now mixed into those whose currency also is aggression and conspiracy and that is a problem because each feed on each other.”

That propaganda is dangerous, not just in California but across the country, Miller-Idriss said.

Aside from the Capitol insurrection in January, QAnon believers have been implicated in more than a dozen acts of violence across the United States, and hate crimes against Asian Americans have surged. As virus restrictions ease, the pent-up vitriol of online politics will likely spill elsewhere.

“It’s not just a prospect,” said Miller-Idriss. “It’s a reality.”