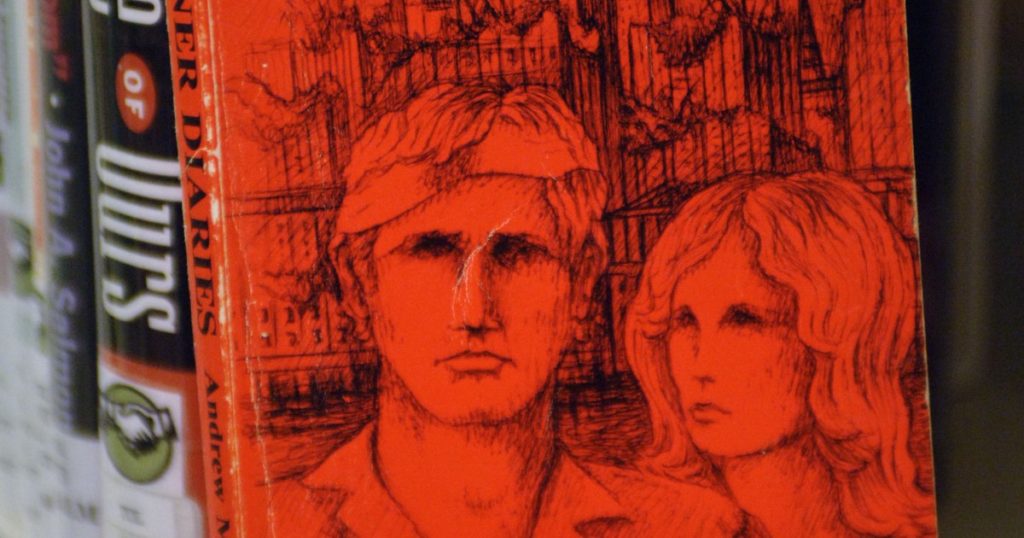 In the 1978 novel “The Turner Diaries,” an underground revolutionary group of self-proclaimed patriots known as “the Organization” attacks the U.S. Capitol. A car bombing of FBI headquarters kills hundreds. In “The Day of the Rope,” members of “the Organization” publicly hang members of Congress, journalists and others they deem traitors. The goal, of course: to overthrow a federal government they believe is engaged in a vast elitist conspiracy.

When historian and author Kathleen Belew watched a white mob of Trump supporters attack the U.S. Capitol on Wednesday, leaving five people dead, she immediately thought of the novel, partly because others have thought about it too: the white supremacists who stormed the Capitol and the law enforcement agencies who monitor them. The FBI has called “The Turner Diaries” “the bible of the racist right.”

The novel was written by William Luther Pierce, head of the Neo-Nazi group the National Alliance, under the pseudonym Andrew Macdonald. “[It] imagines a successful coup by white power activists who take over a homeland, the U.S., then the world,” Belew, author of “Bring the War Home: The White Power Movement and Paramilitary America,” wrote Thursday in a Twitter thread explaining the connection.

One of the books most widely read and cited by extreme far-right groups like The Order and the Aryan Republican Army, “The Turner Diaries” has inspired hate crimes and terrorism in the U.S. and beyond for more than 40 years. The Oklahoma City bombing of 1995, which killed 168 people, bore striking similarities to events in the book.

This morning, a lot of people thinking about The Turner Diaries, so here is some history. Turner Diaries is a novel that imagines a successful coup by white power activists who take over a homeland, then the US, then the world (1)

Belew spoke to the Times on Friday about Wednesday’s attack and how it felt to watch one of the most infamous and virulent novels in American history come to life.

Where were you when you heard what was happening at the Capitol?

I was watching it live anticipating that something like this might occur. From the beginning, it was clear that protestors were moving aggressively on the Capitol. We had indications from people who were watching those online chat spaces that they were planning an action. And it was clear that the mainstream reporting and the Capitol police were not responding in the way one would think. Even among experts who study this, and perhaps were not surprised by the events of Wednesday, it’s still an astounding thing to see a mob violently storm the Capitol and gain access to the building. It’s an incredibly upsetting moment.

At what point did “The Turner Diaries” come to mind?

It’s clear to anyone who studies this movement that some of the activists at Wednesday’s action were white power activists. What we’re looking at on Wednesday is sort of a broad coalition of Trump fans and QAnon believers and more extremist white power groups. But I think that “The Turner Diaries” really becomes a clear point of reference if you look at the photographs of the action. Activists erected a gallows outside the Capitol and hung up symbolic nooses. I saw another photograph of someone who had smashed a television camera and made the cord into a noose. That’s a reference to “The Day of the Rope,” the systematic hanging of lawmakers and other people they consider enemies. The “Diaries” also features very prominently an attack on Congress that is significantly not a mass casualty attack. Although there are lots of mass casualty attacks in “The Turner Diaries,” what happens at Congress is instead meant to be a show of force that a group of activists can impact even a highly secured target. So what we see there is a really clear alignment [with] the way it’s imagined in the movement.

What role does such a book play in white power movements?

“The Turner Diaries” is a novel but it’s also a manual of operations and a cultural lodestar, or center point, for white power activists. It has been since it came out in the 1970s. The novel is important not because it’s a good novel — and here I want to just remind readers never to purchase this novel new because you may inadvertently contribute money to white power groups — but because it provides an answer to a really important question to this movement: How can a small group of fringe activists wage war on a militarized superstate like the United States of America? In the novel, they put it as: “How can a gnat assassinate an elephant?”

And what it does is lay out a plan for guerrilla warfare and domestic terror that involves not only mass casualty attacks but also symbolic attacks that seek to “awaken” other white people to the cause. So that’s what we’re looking at this week. This is meant to be a symbolic strike not to tally a large body count — although certainly the casualties would’ve been a lot higher if the bombs had gone off and the Molotov cocktails deployed and the assault rifle used — but an event that will be seen as a highly symbolic victory. Activists successfully stormed the nation’s Capitol. They got into the building. They made legislators cower. They defaced offices. And they delayed the tallying of our election. They actually did carry out a really successful action this week, and I think it will be seen as a green light by many people in this movement.

The guerrilla army in the book that attempts to overthrow the government also seeks to overthrow institutions like the media. On Wednesday, journalists were assaulted and the words “Murder the media” scratched on a door. What connections did you see there?

“The Day of the Rope” — some of the targeted enemies include journalists. But part of what’s going on in the white power movement, from at least the early 1980s to the present, is that they believe in a conspiracy theory in which a group of corrupt elites controls government, banking, the media and others. Often this is imagined as Jewish elites or people of color controlling white people. Clearly, we are seeing this now morph into or at least coexist with QAnon, which also has conspiratorial beliefs about elites. That same theory unites a whole bunch of different enemies in the eyes of the movement. And that’s everybody from people of color to Jewish people to people they consider race traitors — to journalists, communists, socialists and lawmakers. They’re all on that list of targets.

What other real-world events might have been inspired by the book?

First, let me talk about how we know the novel is important to these activists. I just saw a video, of Proud Boys telling a journalist to read “The Turner Diaries,” that was going around online. It shows up everywhere. In the 1980s, there are all of these stories about people finding the book in bookstores all around the world. They kept stacks of them, not just one copy but 15 copies in the book house of one white power terrorist group. They distributed them at paramilitary training camps. Oklahoma City bomber Timothy McVeigh carried and read and sold the book to others on the gun show circuit. And it’s just one of those things that keeps coming up because it answers this question of how a fringe movement can exert military control on a superstate like the United States.

What was it like to watch on Wednesday, knowing the source material so well?

It’s a very strange thing. I have the unique position, perhaps, of not being particularly surprised, but that doesn’t mean it isn’t incredibly disheartening. What I will say is that knowing this history, it’s very clear that there is an ideological frame to what’s happening. There is a history of the recent past that explains who these activists are and what they’re trying to do, and that history can really help us make sense of what we are seeing in the present.

And what are we seeing? What can we learn that will help?

The Department of Homeland Security has been trying to tell us that white supremacist extremism is the greatest terrorist threat to the United States, that they represent an enormous danger to our democracy and to everyday people. I hope that after Wednesday, more people will heed that warning and that we can finally hold our lawmakers accountable for keeping us safe from that threat.

What role do you think President Donald Trump played in this?

I think that people are putting a lot of stock in Trump’s role here, and I think that it’s correct that he incited the riot and that he has served as the figurehead for this movement. But one thing we can learn from the history of white power activism is that there is very little reason to think that he will retain any kind of coherent command over this groundswell, and I think the fact that he can call these people to arms does not mean he can call them off.