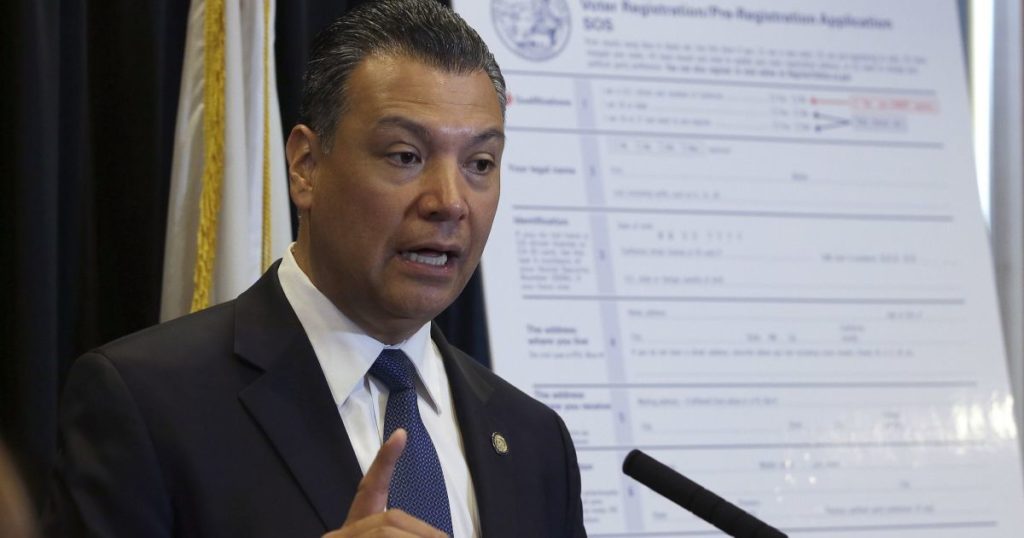 Gov. Gavin Newsom on Tuesday made history by appointing fellow Democrat Alex Padilla to the U.S. Senate, making him the first Latino to represent California as senator. Padilla, California’s two-term secretary of state, will replace Sen. Kamala Harris, who in November became the first woman elected vice president of the United States.

Padilla, 47, has a political career that spans more than two decades and began when he was elected to the Los Angeles City Council in 1999 when he was just 26. He went on to become the city’s youngest Council president, a state senator and secretary of State.

Padilla, who has been working from his home in the San Fernando Valley throughout most of the pandemic, spoke with The Times by telephone shortly after his appointment was announced. The interview has been edited for length and clarity.

THE TIMES: You will become California’s first Latino U.S. senator. Why do you think it took so long and how do you think you’ll reshape a Senate that for centuries has been dominated by white men?

PADILLA: I know it’s an historic opportunity. Personally, I’m just tremendously honored and humbled and look forward to bringing my story, and my journey, as an important perspective to the deliberations of the United States Senate. I know there’s a lot of big-picture issues, but the COVID response is front and center. A relief package was done last weekend, but much more is going to be necessary. This pandemic is far from over and there’s still a tremendous amount of pain and suffering out there from a health perspective, an economic perspective, on so many working families. No state has more at stake in getting this right than the state of California.

The Times: What will be your top priorities in the U.S. Senate and how will you be different than Sen. Dianne Feinstein or Sen. Kamala Harris?

Padilla: I look forward to working with both of them, obviously with Sen. Harris in her soon-to-be-new capacity. But front and center continues to be the COVID response. I’ve seen firsthand the impact of COVID from both the health and economic perspective. It breaks my heart to see the lines, whether it’s at COVID testing sites or at food distribution sites. You know that’s the real human impact that far too many people have endured throughout this year. So we’re gonna continue to keep that as a top priority. At the end of the day, it’s real simple: Just like my parents had to do for me, you work hard, try to provide for your family and try to provide the next generation a better opportunity. All that has been significantly disrupted because of this pandemic.

The Times: It’s likely that the Republicans will hold a majority in the Senate. What do you expect to accomplish if you’re in the minority and will you work with Republicans on legislation and policy even in these partisan times?

Padilla: Absolutely. I know what I’m going to the Senate to fight for — to continue to fight for the American dream, for working families across California and across the country, increased access to healthcare, to battle climate change, improve educational opportunity and make our economy more inclusive. I’ll work with anybody to help get those things done.

The Times: You will become the first California senator from Southern California in almost 30 years. The last one was Pete Wilson. How will you serve differently because of this?

Padilla: It’s a matter of bringing my experience and perspective to the table in the United States Senate, whether it’s because I was born and raised in Pacoima, California, or because of my degree in mechanical engineering, my years of service in municipal government, obviously in state government, state Legislature, this job [as secretary of State].

The Times: Gov. Gavin Newsom received a lot of pressure to appoint a Black woman to replace Sen. Kamala Harris, who was only the second Black woman ever elected to the U.S. Senate. What do you say to those who advocated for a Black woman to be appointed?

Padilla: I’m going to be the best senator I can be for all Californians.

The Times: There’s been increasing pressure for Sen. Dianne Feinstein, one of your political mentors, to step aside to make way for a younger or more progressive senator. What do you think about that?

Padilla: I respect Sen. Feinstein and her years of service and leadership, from her championing the assault weapons ban to in more recent years holding the CIA accountable for the use of force, and a whole lot of things in between. She’s blazed a significant trail. We may not agree on 100% of the issues, but I look forward to working with her on behalf of all Californians.

The Times: You’ll likely face a fierce challenge from both Democrats and Republicans in the 2022 Senate race. How difficult will it be to hold onto your seat when facing off, potentially, against well-funded challengers?

Padilla: I think I’ve demonstrated throughout the course of my public service career that if you do a good job, do the right thing, the right way, for the right reasons, the politics tends to work out. Nobody’s gonna work harder than I will.

The Times: You came back home from the Massachusetts Institute of Technology to work as an engineer in the 1990s. What would you say to that young man now?

Padilla: Buckle your seatbelt because you may think you have a plan, but life’s gonna happen. Despite my upbringing, despite watching my parents work so hard to sacrifice, despite an opportunity to study at one of the best universities in the world, [I came] home to be told California is going downhill and that it’s the fault of people like my parents, families like mine. I knew I had to do something about that.

The Times: There’s also been some recent criticism about a $35-million voter-outreach contract by your agency. What do you say to people who say that the contract was improper? [The contract was to increase turnout during the November election and awarded to a national political strategy company with ties to President-elect Joe Biden. Republicans have criticized the awarding of the contract as politically motivated and California Controller Betty Yee has refused to pay the initial invoice over concerns about the rules governing the election funds in question.]

Padilla: Nothing about what we did was improper. At the end of the day, it’s pretty clear we had an enormously successful and secure election in California, with record registration and record turnout despite the COVID-19 pandemic. Educating voters in a nonpartisan fashion as to what their options were to vote and vote safely was critical and that’s exactly what we did with this voter education program. Ultimately, the only question that remains is which account [to use] to pay for those services. I’m sure the Department of Finance and the Controller and others will determine which is the best account and the matter will be resolved. I have no doubt.