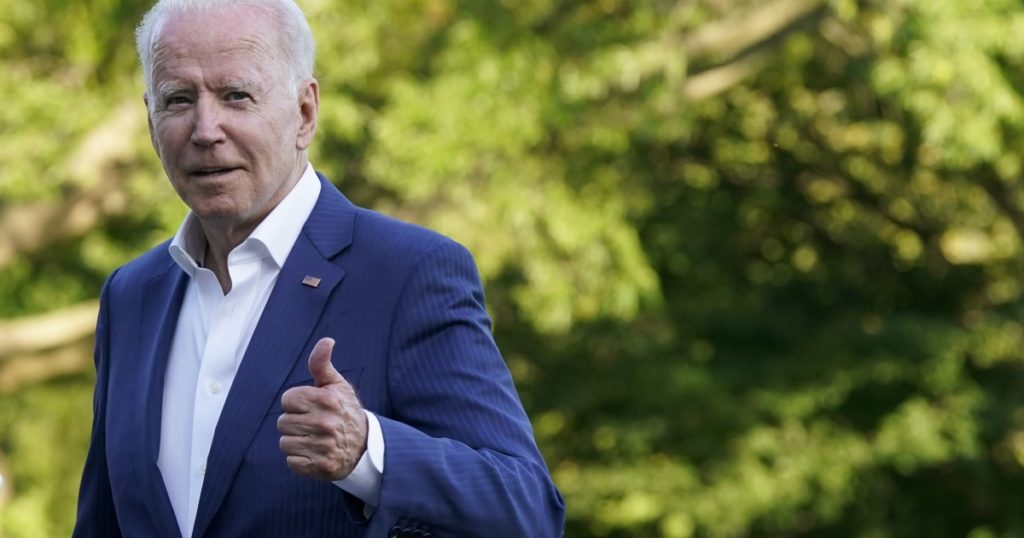 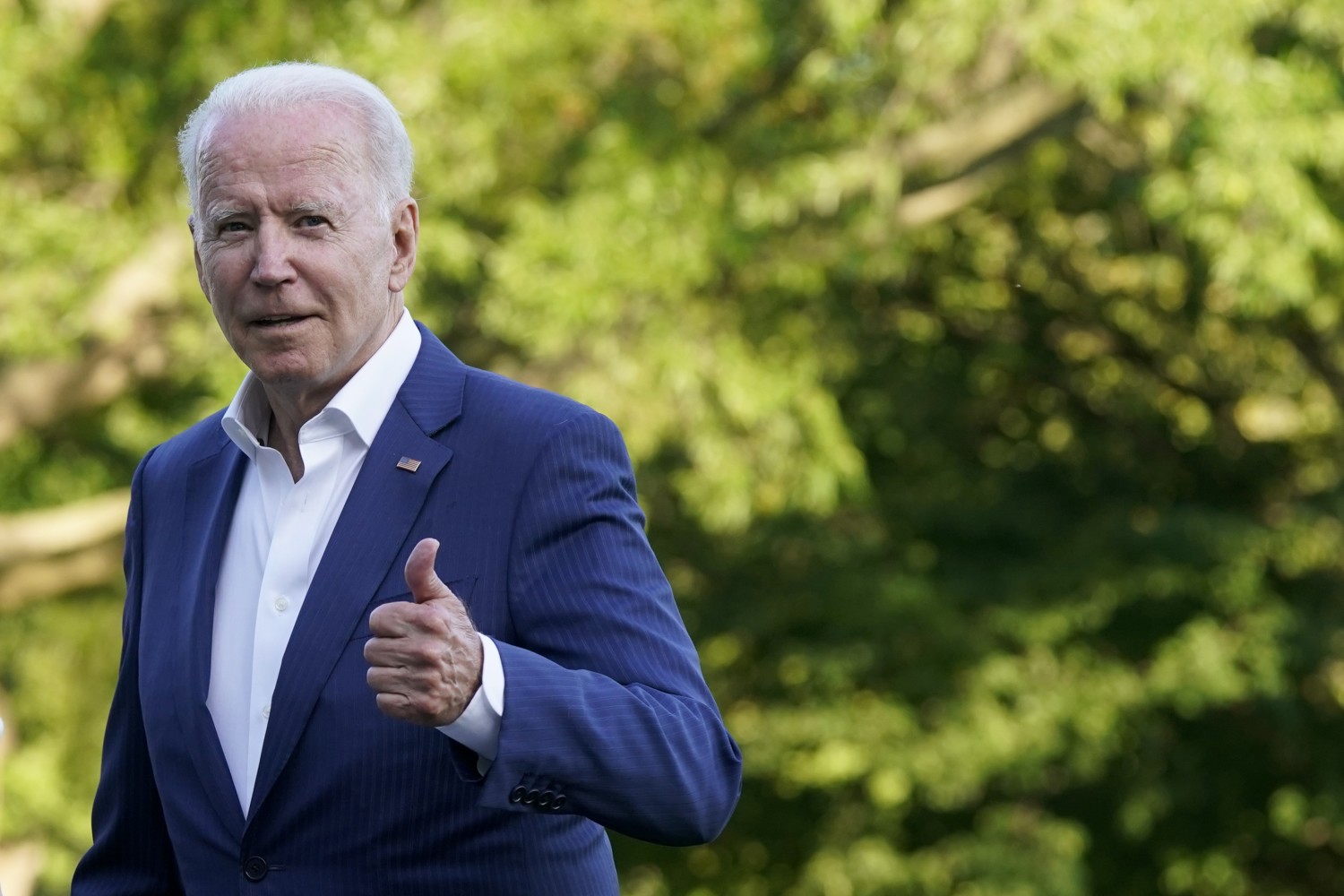 It was the image progressives most feared last year as Joe Biden clinched the long 2020 Democratic primary.

A President Biden standing at the White House alongside moderate Republicans like Sens. Mitt Romney of Utah and Susan Collins of Maine, announcing a deal that garnered support from the middle, but failed to make meaningful change on issues they cared about.

That fear played out last week as the president announced a $1-trillion infrastructure plan with the support of a handful of centrist Republicans and Democrats, but which fell far short of progressives’ demands on climate change and additional tax credits and subsidies for families, home health workers and college students.

Biden has kept progressives mostly happy during the first six months of his presidency. But the infrastructure plan poses a significant test to that relationship.

“We cannot afford a president and an administration that trades progress and policies that will make people’s lives better for the hope of bipartisanship when there is no track record, no history to suggest that is possible,” said Mary Creasman, the CEO of the California League of Conservation Voters, who said the bipartisan bill doesn’t do enough to address climate change.

“Our biggest danger is we may not have the leadership that is willing to do the hard thing and say, ‘Look, sometimes as a leader, I don’t get to make everybody happy,’” Creasman said.

Biden initially appeased progressives by promising to link the bipartisan deal with a second Democrats-only bill that would address issues such as child and elder care, stating that he wouldn’t sign one without the other.

But when moderate Republicans who’d negotiated the deal’s framework with White House officials threatened to pull their support, Biden issued a lengthy statement walking it back.

That seemed sufficient to mollify at least the Republicans involved in negotiating the deal. Three of those GOP senators, Romney, Bill Cassidy of Louisiana and Rob Portman of Ohio, said Sunday they continued to support the package.

But on Monday, Senate Minority Leader Mitch McConnell (R-Ky.), whose backing is likely the key to unlocking broader Republican support for the package, indicated he’s not yet satisfied.

Speaking in Louisville, Ky., McConnell pressured House Speaker Nancy Pelosi (D-San Francisco) to agree that the House would vote on a bipartisan Senate bill, whether or not it’s accompanied by a second bill that Democrats will attempt to pass using the budget reconciliation process, which requires just 50 votes.

“The president’s promise is nice,” McConnell said. “But isn’t determinative unless the majority leader and the speaker agree.”

Such a reversal from Pelosi, who emphatically told reporters last week there “ain’t” going to be a bipartisan bill up for a vote in the House without a companion reconciliation bill, appears unlikely because it could prompt an uprising from the more progressive members of her conference, who aren’t inclined to back a scaled-down bipartisan package without reassurances a second, larger package will follow.

Arguably the most prominent progressive in the House, Rep. Alexandria Ocasio-Cortez (D-N.Y.), signaled in an interview Sunday that her party, not Republicans, holds the White House and majorities — however slim — on Capitol Hill.

“This is our one big shot, not just in terms of family, child care, Medicare, but on climate change,” she said during an interview on NBC’s “Meet the Press.” “In those areas where there is agreement, Republicans are more than welcome to join so that we can get this work on infrastructure done. But that doesn’t mean the president should be limited by Republicans, particularly when we have a House majority, we have 50 Democratic senators and we have the White House.”

Certainly House progressives have the power to reject the scaled-back bipartisan bill if it is not paired with passage of a larger reconciliation package. Rep. Pramila Jayapal (D-Wash.), another progressive lawmaker, vowed to do just that Monday.

“We’re not going to pass a bipartisan infrastructure package unless we are simultaneously passing a reconciliation package that includes our popular priorities and delivers on what the American people want, need and deserve,” she said.

The problem is Democrats, even with a 50-50 Senate split in which Vice President Kamala Harris could break a tie, don’t appear to have the votes in the Senate to enact the sort of sweeping $5-trillion package proposed by Sen. Bernie Sanders (I-Vt.) and supported by progressives.

Several moderate Democratic senators, worried about next year’s midterm elections, have privately expressed concerns to administration officials and leadership about Biden’s plan to pay for major investments in workers and families with a tax increase on corporations or wealthy people, according to three people familiar with the discussions.

Sen. Joe Manchin III (D-W.Va.), the most conservative member of the Democratic conference who has emerged as a power broker in infrastructure talks, signaled an openness to a second reconciliation bill. But he said Sunday he’s unlikely to support one laden with progressive priorities costing more than $2 trillion.

“It probably will not be everything our most progressive members want,” said Sen. Chris Coons (D-Del.), a close ally of the president. “It will probably be more than what some of our moderate members want.”

Biden last week pointed to the larger-than-expected $1.9-trillion coronavirus relief package he enacted in March as proof of his progressive bonafides. And he predicted that his legislative high-wire act will ultimately succeed because Democrats will understand the procedural hurdles of legislating and, ultimately, accept the outcome.

“My party is divided, but my party is also rational,” he said. “If they can’t get every single thing they want, but all that they have in the bill … before them is good, are they going to vote ‘no’? I don’t think so.”

The next several weeks will test that proposition. Biden is scheduled to travel to Wisconsin on Tuesday as he shifts his focus toward building support for the bipartisan infrastructure package, leaving the thorny questions about the legislative process to lawmakers.

He’ll likely highlight the bipartisan plan’s climate change provisions, such as funding for a network of electric vehicle charging stations and major investments in public transit and Amtrak.

White House Press Secretary Jen Psaki on Monday refused to say if Biden would sign the bipartisan bill without the companion reconciliation bill, telling reporters that he is “eager to sign both” while deferring to Congress on the mechanics of getting the legislation to his desk. “It’s up to them to determine the sequencing of the legislation,” she said.

But behind the scenes, aides say Biden will continue to work the phones, relying on his own relationships and personal instincts to keep two fragile coalitions — a bipartisan Senate majority and the House Democratic conference — from splintering.

“I am a big believer in Joe Biden’s ability to both bring people together and get done what has to get done in a bipartisan way while still advancing the values and priorities of what I think is the most progressive administration of my life,” Coons said.