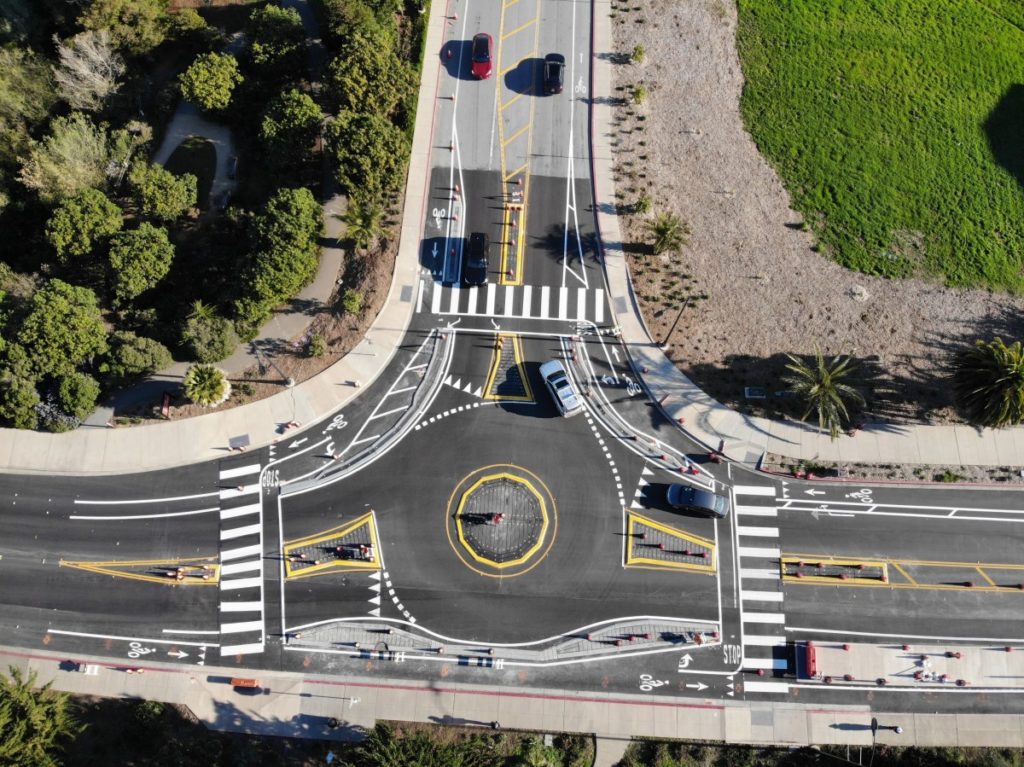 San Francisco’s first roundabout with protected bike lanes is nearing completion, as pictured above and below, at the intersection of Lincoln and Girard in the Presidio.

The Presidio Trust is in the midst of road and bike infrastructure upgrades based on Dutch designs, starting with this intersection. “I studied in Delft, in the Netherlands,” explained Matt Starkey, the Presidio’s transportation engineer and the project’s designer. “I love the Netherlands. They have great bike facilities.”

Although it consults with SFMTA, the Presidio’s planning department maintains and designs roads on its land independently. That means Starkey isn’t beholden to the usual politics and pushback that comes with making changes to the street. Starkey said people had long complained about unsafe speeds through Lincoln and Girard, which is why they started there.

They replaced the wide “T” intersection with a “…very Dutch mini-roundabout with separated bike lanes. It combines elements of the protected intersection into the roundabout design,” said Starkey.

The roundabout is designed with geometries that allow trucks and buses to pass over some of the concrete guides, said Starkey. There are also boarding islands for Muni and PresidiGo buses. However, in theory, cars will be forced to slow significantly to make it through the sixty-foot diameter intersection. Vertical posts are being added to reinforce this with more visual references.

“In the Netherlands, many intersections are being replaced by traffic circles. These circles often have separate bike lanes. By reducing the speed and the number of potential conflicts between road users, travel circles create a safer experience for cyclists, pedestrians, and cars,” wrote Dirk Janssen, Consul General of the Netherlands in San Francisco, in an email to Streetsblog about the newly installed infrastructure.

However, the Presidio departed from Dutch best practices in some respects. For example, instead of using shark teeth to reinforce that motorists must yield to cyclists and pedestrians crossing Girard, they decided a stop sign for cyclists would be safer. Starkey told Streetsblog this was an acknowledgment that American drivers aren’t familiar with roundabouts and might blow right through the crossing, despite the yield markings.

Melissa Bruntlett, an expert on Dutch design from Mobycon in the Netherlands, took issue with that, noting in an email to Streetsblog that in Starkey’s variation “there is no reason for cars to even slow down to take note of vulnerable road users.”

Bruntlett expressed concern that ninety-degree turns for cyclists who are turning left is too sharp. It is “…not conducive to safe, comfortable conditions for a cyclist, especially one on an adaptive cycle, cargo bike, riding abreast to a small child, or simply less nimble in general, and could lead to cyclists hitting the curb and falling.”

Starkey told Streetsblog they may update the intersection after they’ve seen it in action for a while and motorists have a chance to get used to it. For now, however, “we weren’t comfortable giving cyclists an unencumbered movement and wanted to make sure they were intentional about entering the intersection,” he explained. “We went ‘stop’ control for bikes due to concerns about visibility and it being a very new concept for both cyclists and vehicles. It’s conservative, but we’re planning to look into the bicycle control more as the intersection settles in.”

Ultimately, the Presidio will install a quarter-mile of parking bumpers to create protected bike lanes on Lincoln. “We’ll have separated bike lanes from this intersection west to Montgomery,” said Starkey. “They’re part of our next phase of paving happening over the next few months.”

Meanwhile, there’s still some striping and painting to be done on the roundabout, but that should be done in about two weeks. Starkey told Streetsblog he is meeting with SFMTA engineers with the hopes that some of this new Dutch-style infrastructure will find its way outside of the Presidio and onto the surrounding streets.

For more on the Presidio bike plan, check out the Trust’s web page.

Two more pictures from advocate Bruce Halperin below (thanks Bruce, for bringing this to Streetsblog’s attention):