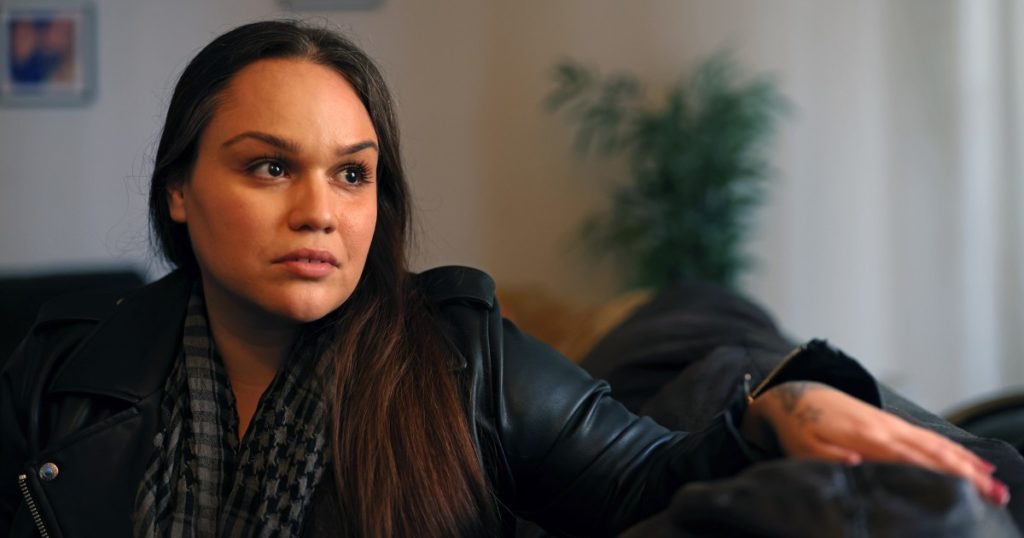 Jenny Beltran was always close to her half-sister — until her sibling moved to Florida with an alt-right boyfriend and started posting conspiracy theories about COVID-19 and pedophilia.

The breaking point came last summer when Beltran attended a local Black Lives Matter rally not far from her Panorama City home, then received a text from her sister questioning why she was protesting in support of “animals.”

Beltran decided to cut off communication.

“When you cross a certain line, it’s hard for me … especially when it comes to race,” said Beltran, who is half-Mexican and was raised in part by a Black woman. “My boyfriend, my mom, they want me to talk to my sister again, but it’s heartbreaking for me.”

Once dismissed as a crackpot belief system undeserving of serious attention, QAnon has emerged as a national security priority in the wake of the Jan. 6 mob attack on the U.S. Capitol. The FBI has labeled it a domestic terror threat and it has been linked to more than a dozen potentially criminal acts across the country. Experts estimate that as many as 20 million Americans have at least partially embraced Q-inspired conspiracies.

Yet for people such as Beltran, the dangers of QAnon have been all too apparent, as family members have slid into angry extremism — proselytizing ideas that are often racist, anti-Semitic and untethered to reality. These include claims of lizard aliens intent on enslaving humans, plots for a mass depopulation of the planet and support of public executions. Many parents, spouses and siblings feel like a cult has ensnared one of their loved ones, and are unsure if they should intervene or focus on protecting their own mental health.

Lonely and often isolated, such family members have been seeking support wherever they can find it. In recent months, a Reddit group called QAnon Casualties for family and friends of believers has grown to 144,000 members.

“It’s been hard to find people to even understand what you are going through,” said Evelyn, who asked that her last name not be used. Her husband recently left her, calling her a “liberal baby killer” because she refused to believe the conspiracies that consumed his days.

“The more you tell [the conspiracy believer] to knock it off, the further they dig into it to prove that they are right,” she said.

Some family members interviewed by The Times declined to use their names for fear of pushing their QAnon-believing relatives further away, and none wanted to publicly identify their loved one — in one case, worried about violent retribution.

But all those interviewed said they were speaking out because, unchecked, QAnon continues to metastasize. Although Twitter, Facebook and other online forums purged some conspiracy content before and after the Jan. 6 Capitol attack, believers have regrouped in more obscure forums like Telegram, or created workarounds on mainstream platforms to avoid censorship. Thousands still check in daily on new theories — including recent posts that Oprah Winfrey was wearing an ankle monitor during her royal interview, proof to some that she had been arrested for child sex trafficking.

A January poll by YouGov, conducted after the insurrection, found that 20% of those who voted for former president Trump in the recent election had a somewhat or very favorable opinion of QAnon.

“This is not just a silly little thing,” said Sara Rogers, whose anti-vaccine daughter has embraced falsehoods about Dr. Anthony Fauci and Bill Gates during the pandemic. “This has seriously infiltrated our society on multiple levels.”

Before the pandemic, Rogers said her daughter questioned vaccines, ate organic and eschewed chemicals, even making her own detergent. But last spring after the coronavirus appeared and her boyfriend lost his job, Rogers said that clean-living ethos grew “more militant” and her daughter became angry at her for refusing to see the pandemic as a scam.

Her daughter wouldn’t take virus precautions, even after Rogers, who has severe asthma that has required hospitalization, said she felt unsafe visiting. By summer, her daughter delved into Q ideas of pedophilia and voter fraud, she said. After Rogers pushed back on her daughter’s claims, Rogers said her daughter cut off all communication.

In the fall, Rogers was diagnosed with breast cancer and reached out to her daughter for help. She never received a response, she said, and went through radiation and surgery alone.

“When your beliefs are more important than your only family having cancer, that’s like beyond comprehension,” said Rogers. “The emotion pain from this was much more painful than the cancer treatments. This still doesn’t make sense.”

Now, Rogers said she is uncertain if she can forgive her daughter, whom she considered the most important person in her life.

“She’s not a kid. She’s 33 years old. I don’t need to have to explain this to her, seriously,” Rogers said. “I was collateral damage in this whole thing.”

Evelyn, the Ohio wife, said she feels the same sense of betrayal from her husband.

Evelyn met him more than a decade ago when he was dropping his granddaughter off at the same daycare where she brought her own child. She was impressed with how much the retired firefighter cared for his granddaughter, whom he is raising, and liked his musical side that led him to play in blues and rock bands. Three years ago, they were married in a country wedding, with a reception in a friend’s barn.

But after the lockdown last March, Evelyn’s husband was cut off from his bandmates, and spent more time on politics. After a while, Evelyn stopped turning on the morning news because he would “rant” when he saw stories criticizing Trump, she said. Soon, he was spending hours a day on the internet and would only talk about QAnon propaganda, including “kids being eaten underneath the White House.”

After George Floyd was killed by a Minneapolis police officer in May, her husband’s attention turned to civil unrest across the country, she said. At the time, many right-wing sites were depicting U.S. cities as being overtaking by lawlessness, and QAnon pages were blowing up with incendiary images. Evelyn, whose daughter is half Black, said her husband began using the n-word to describe protesters and became “defensive” when she confronted him about its effect on their children.

“I told him, ‘You don’t understand, she is hearing you,” she said, adding that her husband refused to back down. In the weeks ahead, her daughter “crumbled,” she said, going from an A student to one struggling in school.

“It really got to the point where he would be downstairs, I would be upstairs, the girls began hiding in their rooms when he came up because every conversation was about voter fraud or dead babies and gay people,” she said.

Evelyn said he moved out in January, saying he was filing for divorce. “Even if he does come back, it’s going to take a lot of repairing,” she said.

Beltran also wonders what it would take to get back to normal with her sister, whom she described as a best friend with similar political views and who “was always on the same side as me.”

Beltran believes that isolation and the influence of an extremist boyfriend contributed to her sister’s transformation, but also she’s troubled by her sibling’s increasing involvement.

“It’s like she’s grown her little QAnon wings and she’s flying on her own now,” Beltran said, adding that the experience left her overwhelmed. She deleted all of her own social media accounts, depressed to see how widespread the conspiracies were and how many people were involved.

“I am completely alienated in my life right now,” said Beltran. “I have completely pulled away.”

Cult experts and mental health professionals offer varying advice on how family members should respond. They say QAnon differs from traditional cults in that it doesn’t have a central charismatic leader, but rather a motivating belief system that constantly changes and expands.

Cult deprogramming expert Patrick Ryan said he believes most conspiracy theorists will eventually leave QAnon on their own. He said he’s been contacted by more than 100 families this year seeking advice, but has only recommended intervention in two cases. But for those who don’t leave willingly, he stresses that maintaining contact and offering a “dignified” way out that doesn’t shame the believer are important strategies.

But Steven Hassan, an expert on cults and mind control and the author of “The Cult of Trump,” said he believes QAnon “is structured like a psychological warfare operation” that is akin to brainwashing, and involves sophisticated manipulations. He stressed that “it is not stupid, ignorant, uneducated people who are involved,” but average people who often started out seeking information or answers during an uncertain time. Leaving can be difficult because the theories are providing stability and a sense of order.

Rogers, the mom, believes the solutions have to be larger than individuals, She is considering a class-action lawsuit against leaders in the anti-vaccination movement who have promoted and in some cases profited off vaccine falsehoods that are now fueling QAnon.

Evelyn, whose husband has been gone for two months, isn’t sure if anything can fix the past year for her family.

“Everyone just tells me I should change the locks on the house and file for divorce, and I am not willing to do that yet,” she said. “I keep praying he comes out of this somehow.”