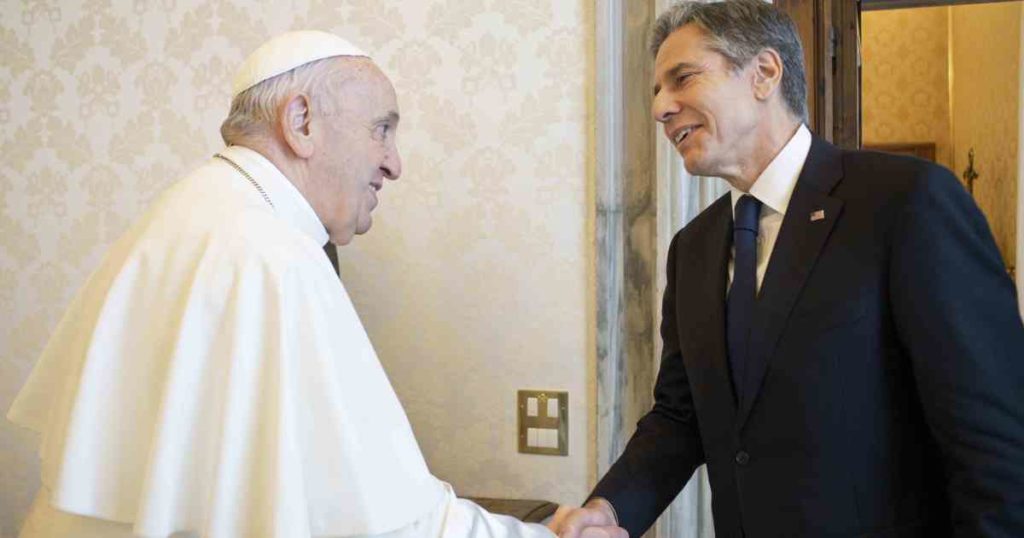 The pope and the American secretary of State exchanged gifts and wisdoms Monday, but whether they discussed the politics dividing the Roman Catholic Church in the U.S. remains anyone’s guess.

Antony J. Blinken and Pope Francis talked for about 40 minutes, according to the Vatican, and photos that they tweeted showed a friendly and intimate exchange. The two discussed climate change, migration, the scourge of human trafficking and similar issues, the State Department said. The last time a U.S. secretary of State came here — Michael R. Pompeo nearly a year ago — the pope did not grant him an audience.

“Let me just say, on a personal level, what an honor it was,” Blinken told reporters later. “The meeting was extremely warm and very wide-ranging. We covered a lot of ground.”

He added he was “very gratified” by the pontiff’s leadership on the pandemic and refugees and said he was thankful that he did not have to delve in U.S. domestic politics. He could thus could avoid answering questions about a campaign by some U.S. Catholic bishops to deny President Biden — a devout Catholic — communion because of his support for reproductive rights.

Blinken repeatedly referred to Francis as “his holiness,” an especially honorific title that is usually used by Catholics.

Blinken, whom aides describe as a secular Jew, and Francis appeared to hit it off, as has been the case on most of the secretary’s stops this and last week in Europe, where he is attempting to repair the damage done to transatlantic ties by former President Trump. Officials frequently called him Tony.

Blinken also toured the Vatican’s Sistine Chapel before his meeting with the pontiff. The marvel of architecture and artistry, with frescoes including Michelangelo’s “Last Judgement,” reliably wows throngs of tourists. Blinken, on his private tour, seemed no less affected, wordlessly gesturing at the space when asked his thoughts.

“The spiritual atmosphere, the divine art, and the impressive architecture left me speechless,” he later tweeted. “Truly stunning.”

Blinken is on a week-long tour that has included Berlin, Paris and Rome. On Monday in Rome, he attended an 80-nation meeting of the the global coalition fighting the so-called Islamic State, where new attention is being focused on the organization’s recruitment efforts in Africa.

Islamic State “is very dangerous still,” Italian Foreign Minister Luigi Di Maio said, recounting that he visited several African countries in recent weeks, including Mozambique and Mali, to gauge the extent of the spread of the terrorist organization.

“We’ve got to fight their ideology as well,” Di Maio said.

Blinken urged countries around the world to repatriate and, when appropriate, prosecute Islamic State fighters, and their families, who have been captured in Syria, Iraq and elsewhere.

Blinken is following on President Biden’s summits earlier this month with NATO, the Group of 7 wealthiest democracies and European Union partners.

On Tuesday, Blinken will be in southern Italy for the Group of 20 meeting of foreign ministers, focused on climate and health, as well as sustainable development in Africa.