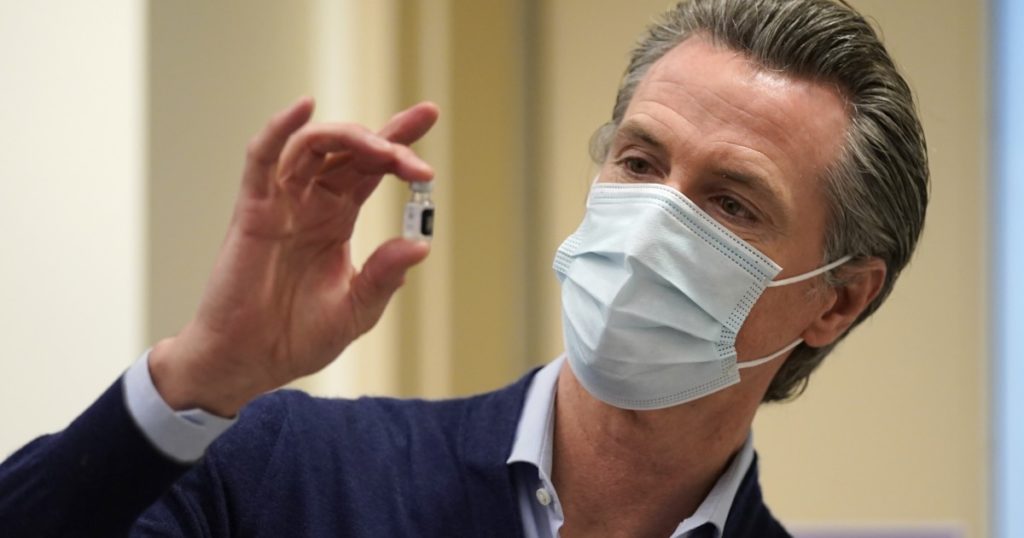 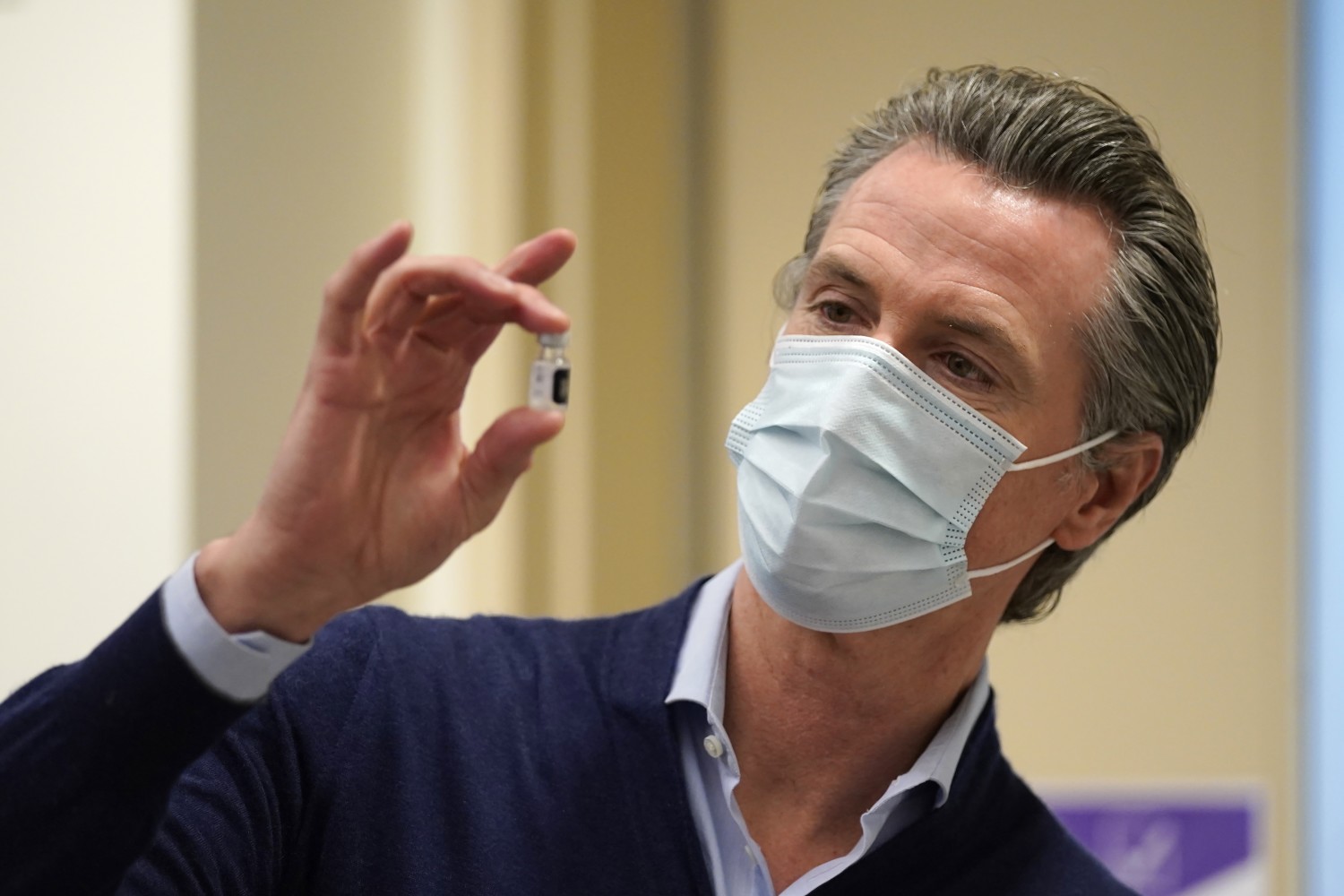 Gov. Gavin Newsom’s job approval rating among California voters has plummeted, driven largely by dissatisfaction over the state’s response to the COVID-19 pandemic and adding fuel to a Republican-led recall campaign, according to a new poll by the UC Berkeley Institute of Governmental Studies.

More than a third of the state’s registered voters said they would vote to oust Newsom from office if the recall qualifies for the ballot, though 45% said they would oppose such a move, the survey found.

The decline in Newsom’s standing could endanger his policy agenda as he guides the state through the pandemic and as even his political allies begin to question the actions he has taken. It also provides a sobering sign for the 53-year-old Democrat that his once bright political future, for years the subject of whispers about a potential White House run, has lost some of its shine.

California voters were almost evenly split when asked whether Newsom has done a good or bad job as governor, a precipitous drop from September when two-thirds of those polled gave him high marks.

The poll also found that just 31% of those surveyed thought that Newsom and other state government leaders have done an excellent or good job handing the pandemic, while 23% said they have done a fair job and 43% called it a poor job.

“People are reevaluating how well Newsom is doing handling the pandemic,” said Mark DiCamillo, director of the poll. “Once your job performance rating starts to decline, it’s more difficult to put it back in the right direction. You kind of accumulate negatives over time.”

Less than half of California voters — 46% — approved of Newsom’s job performance, a dramatic slide for a governor who was elected with a historic margin of victory in 2018 over Republican challenger John Cox and defeated a slate of Democratic challengers in that year’s primary.

Just four months ago, Newsom had a 60% approval rating — among the highest of any California governor in the past 50 years at the same point in their first term.

Newsom and other governors around the country have been struggling to juggle protecting public health with mitigating the detrimental consequences their actions to slow the spread of coronavirus have on businesses and the livelihoods of their constituents.

The governor‘s orders have shuttered or limited services at restaurants, nonessential retail stores and other types of businesses for long periods over the last 11 months. Each announcement by Newsom has been met with pushback from those who believe his restrictions went too far and others who complain he didn’t go far enough.

His public image took a hit in November when he attended a lobbyist’s birthday party at the upscale French Laundry restaurant in Napa Valley after pleading with Californians to stay home and avoid similar multifamily gatherings. Less than a month later, he announced new regional stay-at-home orders that shut down outdoor dining across much of the state, but allowed limited in-person shopping to continue at retail stores during the holiday season.

Meanwhile, the state’s unemployment agency has been besieged by scandal and mismanagement, with millions of jobless Californians awaiting payments and at least $11.4 billion in unemployment benefits paid to fraudulent claims during the pandemic.

The Newsom administration’s troubles come as Californians are chafing at nearly a year of COVID-19 restrictions and closures to stem the spread of the deadly virus, devastating businesses large and small, putting many out of work and forcing schoolchildren into distance learning programs.

After months of expressing his desire to reopen schools, the governor introduced a plan at the end of the year to get children back on campus. But school boards, districts, administrators and teachers criticized the proposal and shed doubt on Newsom’s claim that his plans would allow for in-person learning beginning in February.

The governor’s plan to distribute vaccines across a state of nearly 40 million people has also faced obstacles.

California’s vaccine plan initially prioritized healthcare workers, teachers, first responders and food and agriculture workers for inoculation, as well as those 65 and older. But just weeks into the plan’s rollout, the Newsom administration changed course, eliminating priority access for other essential workers and adopting an age-based system for residents younger than 65, according to details released so far.

The poll found that California voters were almost evenly split over whether the state’s stay-at-home orders and guidelines for businesses slowed the spread of the coronavirus, with 49% saying they had little if any impact and 47% saying that the restrictions had a major or at least some impact.

In addition, more than half of California voters polled found the COVID-19 restrictions and rules put in place confusing, inconsistent and ineffective. Still, more than half also found the actions taken necessary, science-based and decisive.

Among Democratic voters, who outnumber Republicans by almost a 2-1 margin in the blue state, 69% opposed recalling Newsom from office and 71% said they had confidence in his administration’s efforts to slow the spread of the coronavirus. However, 20% of Democrats said they were undecided about the recall.

Eighty-four percent of Republicans supported the recall — with just 9% undecided — and just 10% said they trusted Newsom’s response to the pandemic.

The poll found a more measured response among independent, “No Party Preference” voters, who account for nearly as much of the electorate as Republicans and will be pivotal in any recall election.

Of those voters, 40% said they opposed recalling Newsom while 32% supported the effort and 28% were undecided. But a majority of independents — 50% — said they distrusted the Newsom administration’s response to the virus, compared with 43% who had confidence in it.

Among California voters, 36% supported recalling Newsom while 45% opposed doing so. The percentage of voters who back ousting Newsom mirrors the support for President Trump in California in the November election, when he received 34% of the vote and was trounced by Joe Biden.

The poll also found that 49% of California voters believe a recall election would be bad for the state, while 36% said the opposite.

The latest effort to recall Newsom from office, one of three launched since he took office in 2019, began in June. Though spearheaded by supporters of Trump with assistance from far-right fringe groups, the recall campaign has since been adopted by mainstream California Republicans who formed their own parallel campaign led by some of the same strategists who helped oust former Gov. Gray Davis in 2003.

The various GOP-funded recall committees claim to have collected 1.3 million voter signatures to force a statewide special election this fall. But only about 410,000 signatures had been verified by elections officials as of last month, with another report on the tally scheduled for mid-February. Proponents of the effort to recall Newsom have until March 17 to turn in almost 1.5 million voter signatures, but will likely need to collect more than that to offset those determined to be invalid.

DiCamillo said that, according to the Berkeley poll, Newsom appears to be in a much stronger position politically than Davis was 18 years ago. During the 2003 recall campaign, a Field Poll found that 67% of California voters said they had an unfavorable opinion of Davis, a Democrat. In the Berkeley poll, 48% of voters had an unfavorable opinion of Newsom. DiCamillo conducted statewide opinion surveys for the Field Poll before joining Berkeley IGS.

Democratic consultant Garry South said Davis’ ratings were in “Nixon territory” — comparable to those earned by former President Nixon before he was forced to resign in disgrace — and noted that even Democrats were coming out against Davis at the time.

Newsom is “coming into this potential recall from a far stronger position than Davis was in 2003,” said South, who managed campaigns for Davis in two gubernatorial elections and Newsom during his short-lived run for governor in 2010.

California’s political climate also tilts in Newsom’s favor, South said. The Democratic Party’s advantage over the GOP in the state has swelled since 2003, and not a single Republican has won a statewide election since 2006.

South said that even if the recall does qualify for the ballot this fall, the circumstances in California will almost assuredly be very different — schools may be open by that point, most Californians may be vaccinated, and the state could be returning to a sense of normalcy.

Republican political consultant Rob Stutzman said one of the greatest political threats to Newsom could come from progressives in the state if they sour on the governor and decide to back one of their own. If they join with Newsom’s Republican critics to oust the governor, the recall movement would get a major boost.

Stutzman said Newsom should be concerned that his job approval rating is under 50%, which is usually a danger sign.

“These polling numbers show that he is not a lock to beat the recall. He’s under 50%,” said Stutzman, who served as the spokesman for Gov. Arnold Schwarzenegger, the Republican elected to replace Davis when he was recalled. “To me, it’s the market sign of real vulnerability.”

The Berkeley poll was conducted online in English and Spanish last week and included more than 10,000 registered voters, with the estimated margin of sampling error being plus orminus 2 percentage points.