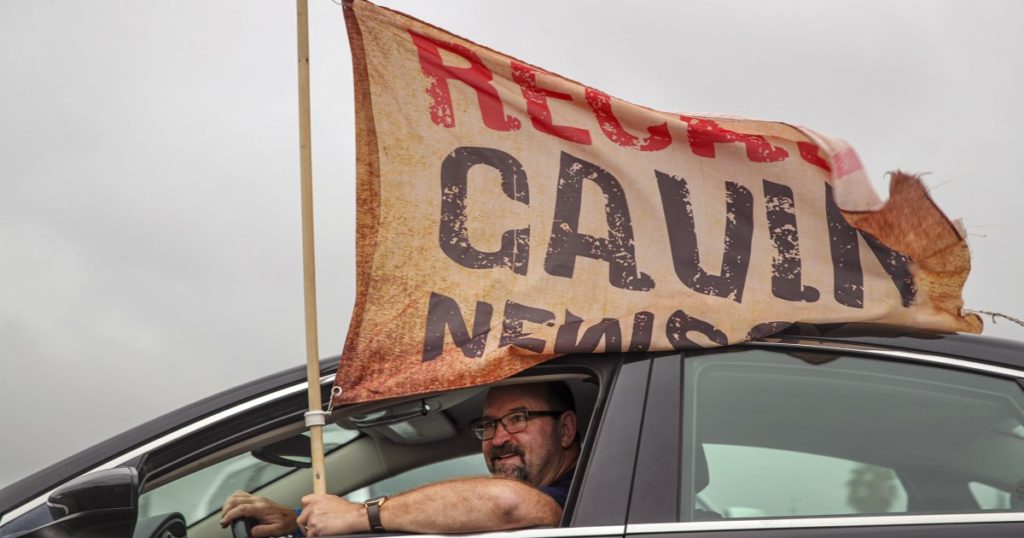 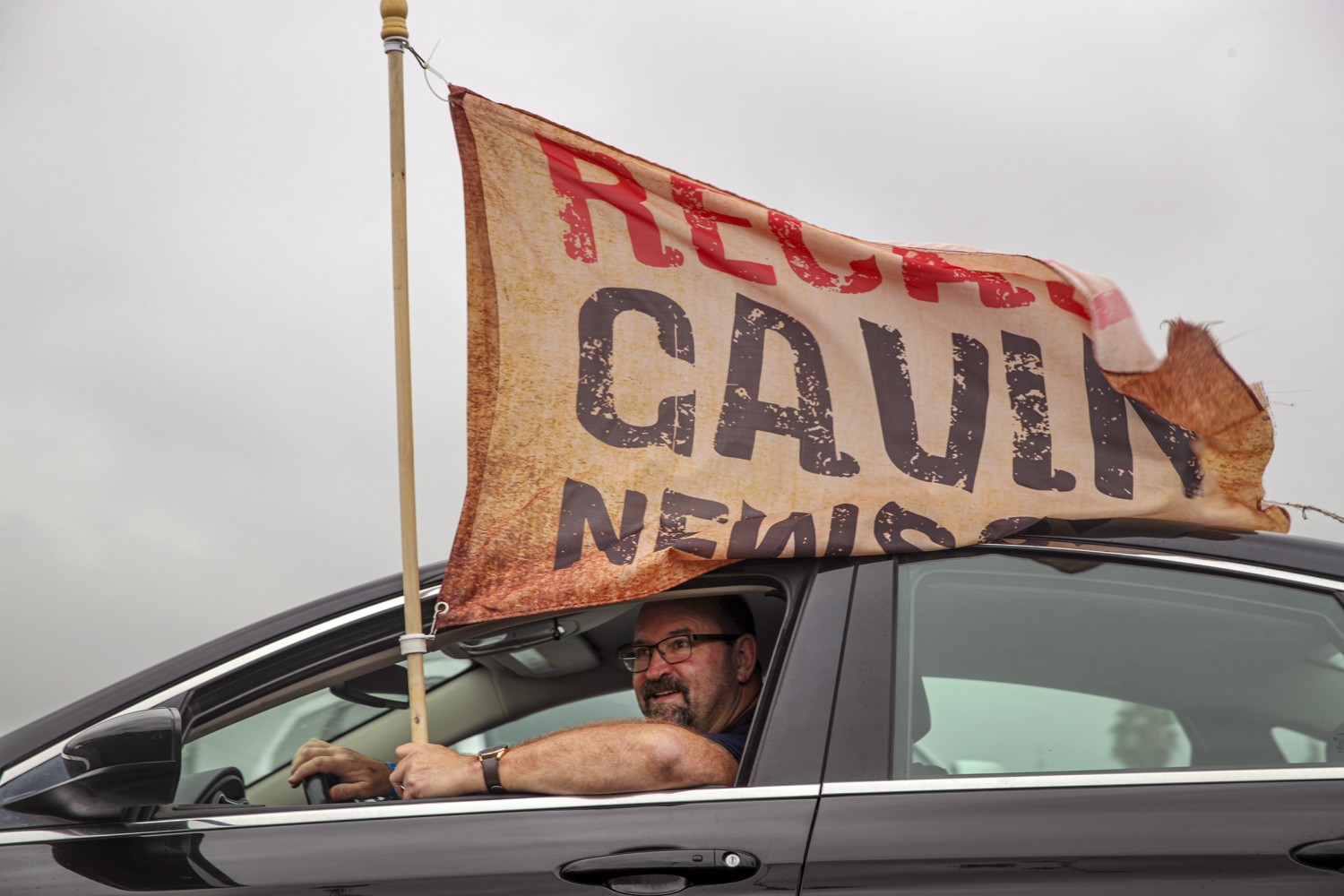 Most likely California voters are opposed to the Republican-led recall effort against Gov. Gavin Newsom and a growing number fear the consequences of removing him from office with a hard-right conservative best positioned to take his place, according to new poll by the nonpartisan Public Policy Institute of California.

The poll found that 58% of likely voters surveyed in California oppose removing Newsom from office compared to 39% who support recalling the governor, a gap rooted in the sharp partisan divide between Democratic and Republican voters in the state.

The findings, which were gathered by pollsters over a nine-day period ending on Sunday, may offer some hope for Newsom, who has for the past month expressed concern that an “enthusiasm gap” among Democratic and nonaffiliated voters could lead to his political demise — particularly with high engagement in the recall effort among Republicans.

In response, Newsom has blanketed California with ads attacking the top GOP candidates, casting them as devotees of former President Trump who oppose state mandates for COVID-19 vaccinations and mask wearing, a clear strategy to rally California’s left-leaning electorate.

At a event in Oakland on Tuesday promoting vaccination, Newsom said Californians needed to treat their vote in the recall as a life-and-death decision, since leading GOP candidates have said they would rescind his administration’s mandates for schoolchildren to wear masks in classrooms, mandatory vaccinations for healthcare workers and requirements that state employees, teachers and school staff members either be vaccinated or tested regularly for the virus.

Mark Baldassare, the institute’s president and chief executive officer, said that among the poll’s most telling findings were increased voter fears over the potential aftermath in California if Newsom is ousted in the Sept. 14 election and growing concerns about whether the campaign to oust Newsom is an appropriate use of the state’s recall process.

The survey found that 41% of likely voters said California would be worse off if Newsom is recalled, compared to 31% who thought things would get better in the state. The remainder either thought everything would stay the same or did not know. Forty-four percent thought it was appropriate to use the state’s recall process to remove Newsom from office, down from 52% in a similar poll in March.

“Democrats have heard messages about the roots of this recall and what would happen with COVID and other things if Newsom is removed,” Baldassare said. “It hasn’t moved Republican voters or independent voters much, but has had an impact on Democratic voters.”

The opinions of likely voters about Newsom as governor and the recall election fall largely along party lines in a state where registered Democrats outnumber Republicans almost 2 to 1.

Nine out of 10 Democratic voters opposed ousting Newsom while 82% of Republicans wanted him gone. Independent voters, who register as “no party preference,” were more evenly split, with 49% opposing the recall and 44% supporting it.

Baldassare said the levels of support for and opposition to recalling Newsom track closely with those found in the institute’s polls in May and March.

However, a separate poll released in late July by the UC Berkeley Institute of Governmental Studies, and co-sponsored by the Los Angeles Times, found likely California voters to be almost evenly divided over whether to recall Newsom.

The difference in the findings reflects the difficulties in determining who may be a “likely voter,” a calculation that is often based on factors such as voting history, interest in the pending election and whether a person plans to vote.

Making that determination is especially challenging with regard to the recall election. Not only is the election being held at an odd time — mid-September — it’s the only thing on the ballot. The last time California held a recall election was in October 2003, when then-Gov. Gray Davis was ousted and replaced by Republican Arnold Schwarzenegger.

There are no movie stars or prominent Democrats on the ballot his time.

Newsom‘s anti-recall campaign has largely been focused on yoking the Republicans running to Trump, who was roundly defeated in California by Joe Biden in the 2020 presidential election.

The governor’s attacks in recent weeks have targeted conservative talk show host Larry Elder who has emerged as the favorite among many Trump supporters and evangelicals.

Newsom, in a Zoom call with Move On activists Wednesday night, broadened his attacks against Elder and the rest of the Republican field, saying they would work to dismantle abortion rights and the public school system by allowing parents to received state vouchers to send their children to private school.

Elder was his prime target.

“He has this in common with all the other Republicans who all supported Trump,” Newsom said. “Elder, Day One, will eliminate with a stroke of a pen, through executive order, mask requirements in our public schools, would eliminate vaccine verification for our healthcare workers and our school employees and state employees.”

At a news conference on Wednesday, Elder dismissed the notion that the recall effort was only supported by Republicans.

“This is broad-based. This is not just Republicans — independents and Democrats are hurting, as well. So, it’s just more misdirection to take time and attention away from why he’s being recalled,” Elder said.

The poll found that Elder is by far the most popular choice among the top Republican candidates running to replace Newsom if he is recalled.

About a quarter of those polled said they were undecided, and an equal number said they were not going to vote for any replacement candidate or cast a ballot.

“Only one candidate stands up because of name recognition and the association with conservative causes. That is very attractive to people who are supporting the recall,” Baldassare said.

Elder’s following among conservative talk show listeners also gave him an advantage because of the compressed nature of the recall campaign, which has played out in just over two months, Baldassare said. Traditional campaigns for California governor can span years.

The Sept. 14 ballot has two questions: Should Newsom be recalled from office and, if he is ousted, which replacement candidate should take his place.

If Newsom is recalled, the candidate on the ballot who receives the most votes wins — no matter how many votes he or she receives. The crowded field of candidates is expected to splinter the electorate, which means a Republican who reels in just a small fraction of the vote could become California’s next governor. No Republican has won a statewide election in the state since 2006.

Ballots have already been mailed to all California registered voters. The mail ballot returns so far show that more than twice as many Democrats have voted than Republicans and that liberal areas of the state such as the Bay Area have the highest rates of return, according to state officials and political data researchers.