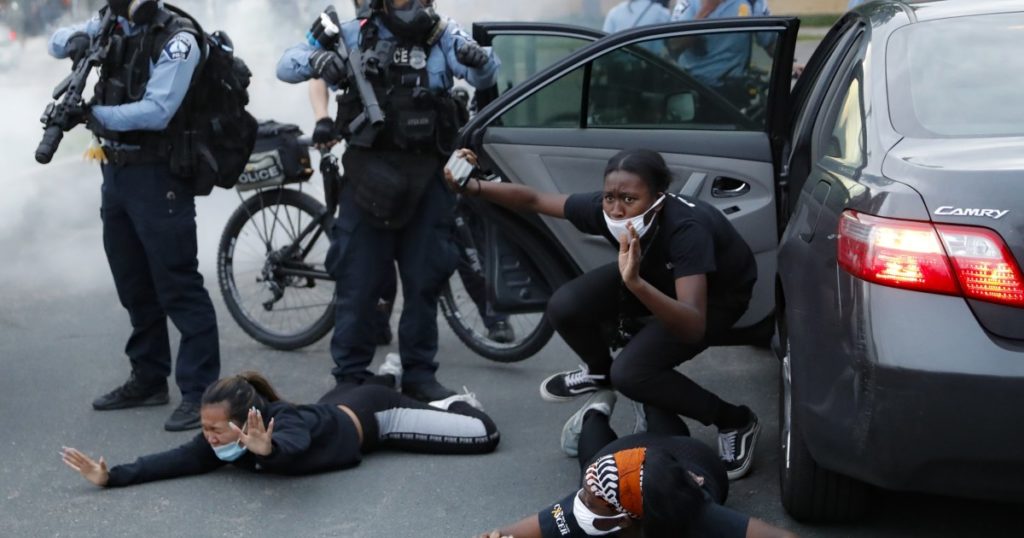 The image of a young Black man, curled up on a Dallas sidewalk with blood gushing from his left eye after being struck by a police officer’s rubber bullet during a protest for racial justice, was seared into the national psyche last spring.

Days earlier, protesters outraged over the police killing in Minneapolis of another Black man, George Floyd, in late May, sprinted through the streets of a leafy neighborhood as police in tactical gear sprayed the crowd with tear gas.

But this week, as a mostly white mob of extremists loyal to President Trump smashed their way into the U.S. Capitol, at times shoving police officers to the ground, ransacking congressional offices for several hours and posing for photos with stolen items, police took a decidedly more hands-off approach.

On Thursday, as Americans began to dissect the muted police response to such an attack on the seat of government, the violence emerged as a central focus in the long-standing national discourse about race and policing.

“This disgusting contrast in policing is far too familiar to the Black community,” said Derrick Johnson, president of the National Assn. for the Advancement of Colored People.

As the rioters stormed the Capitol on Wednesday, the NAACP offered a simple message on Twitter: “They have killed us for less.”

The mayhem resulted in the deaths of at least five people — a woman who was shot by the Capitol Police, as well as a Capitol Police officer and three others who died as a result of what authorities called medical emergencies — and led to more than 50 arrests by late Thursday. Dozens of officers were injured during the attack, said Steven Sund, chief of the Capitol Police.

Law enforcement had “responded valiantly,” Sund said in an initial statement, which did not address a flood of pointed questions about whether officers had yielded too easily to the mob comprising mostly white people.

Many of the extremists were wearing red “Make America Great Again” hats and some were waving Confederate, Trump and Gadsden flags.

“These mass riots were not 1st Amendment activities. They were criminal riotous behavior,” said Sund, who added that a “thorough” review of the police actions would follow.

Late Thursday, Sund announced his resignation, which House Speaker Nancy Pelosi (D-San Francisco) called for earlier in the day. He will depart Jan. 16.

The attack had occurred as Congress was in the process of certifying President-elect Joe Biden’s victory over Trump in the November election.

“There was a failure here,” he said, “and hard questions need to be asked about what happened.”

Johnson, who is Black, said that on a day filled with shocking scenes, among the most disturbing sights were the scaffold and hangman’s noose erected outside the Capitol, as well as the image of the Confederate flag being gleefully waved by insurgents as they swaggered through the halls.

“Frankly, I was horrified to see these images,” Johnson said. “This is not America — this is Trumpism boiled over.”

Michelle Obama highlighted the double standard of policing seen at the Capitol compared with how police officers responded at largely peaceful Black Lives Matter protests. In some cases, officers who had not been provoked by Black Lives Matter protesters nevertheless beat them with batons and shields and fired rubber bullets at close range. At times, officers faced vandals and rioters.

“For those who call others unpatriotic for simply taking a knee in silent protest, for those who wonder why we need to be reminded that Black lives matter at all, yesterday made it painfully clear that certain Americans are, in fact, allowed to denigrate the flag and symbols of our nation,” the former first lady wrote on Twitter. “They’ve just got to look the right way. What do all these folks have to say now?”

Delores Jones-Brown, a visiting professor at Howard University and a professor emeritus at John Jay College of Criminal Justice, said the violence in the nation’s capital “demonstrated that law enforcement can exercise restraint.”

“It marks how racist a society we are and how law enforcement actually is more readily willing to facilitate behavior of white protesters,” Jones-Brown said. “There was a clear acquiescence to these rioters’ unlawful behavior. The lack of preparation says something about how law enforcement thought these individuals should be treated as opposed to those who participated in Black Lives Matter.”

Some analysts said issues with preparation included an inadequate level of staffing by law enforcement, especially considering that a large number of Trump backers were expected to be in the city Wednesday. Capitol Police were overwhelmed, they said.

“The law enforcement in the nation’s capital is attuned to big events and demonstrations. They collaborate every four years to create a safe environment for the new president,” said Lynda Williams, president of the National Organization of Black Law Enforcement Executives.

“There was a lack of preparation and attention to this riot yesterday,” said Williams, a criminal justice professor who retired in 2017 after three decades in the Secret Service. “It was one of the biggest mobs I have seen in my career as a federal agent.”

After Floyd’s killing by a Minneapolis police officer on May 25, protests have blanketed the nation. Chants of “Hands up, don’t shoot!” and “No justice, no peace!” have been shouted as protesters marched past police in riot gear. In many instances, police lashed out against protesters, raising concerns about use of force.

Alicia Smith, a neighborhood organizer in South Minneapolis, said she watched television stunned at how the white rioters entered the U.S. Capitol with little resistance from police.

“There is a clear double standard in this country — in how Black and brown people are treated when it comes to policing,” said Smith, who is Black. “And it’s not just in policing; it’s in housing, it’s in healthcare, it’s in all parts of life.”

As she watched the images, Smith said, she thought about how, in the 1950s and 1960s, peaceful protesters during the civil rights movement were sprayed with water hoses and attacked by police dogs.

“All I know is that if those people who stormed into the Capitol were Black, it would be a totally different outcome — mass arrests, police brutality would have been on full display,” she said.

In Kenosha, Wis., riots and protests left buildings destroyed in August after police shot a 29-year-old Black man, Jacob Blake, in the back seven times. Federal law enforcement and National Guard troops were dispatched across the city for days as the city went under curfew.

This week, hundreds of troops were again called into Kenosha in anticipation of protests before the announcement that the officer who shot Blake would face no charges. There was no violence as people marched in the streets.

“They overprepared police for the Black community in Kenosha and they underprepared for white outrage in D.C.,” said Alvin Owens, who runs Regimen Barber Collective near uptown Kenosha and was pepper-sprayed during summer protests. “The National Guard should have been in D.C. instead.”

“If white America didn’t understand their privilege, they saw it yesterday,” he said.

“White supremacy was on full display. The world saw it.”

Lee and Kaleem reported from Los Angeles and King from Washington.