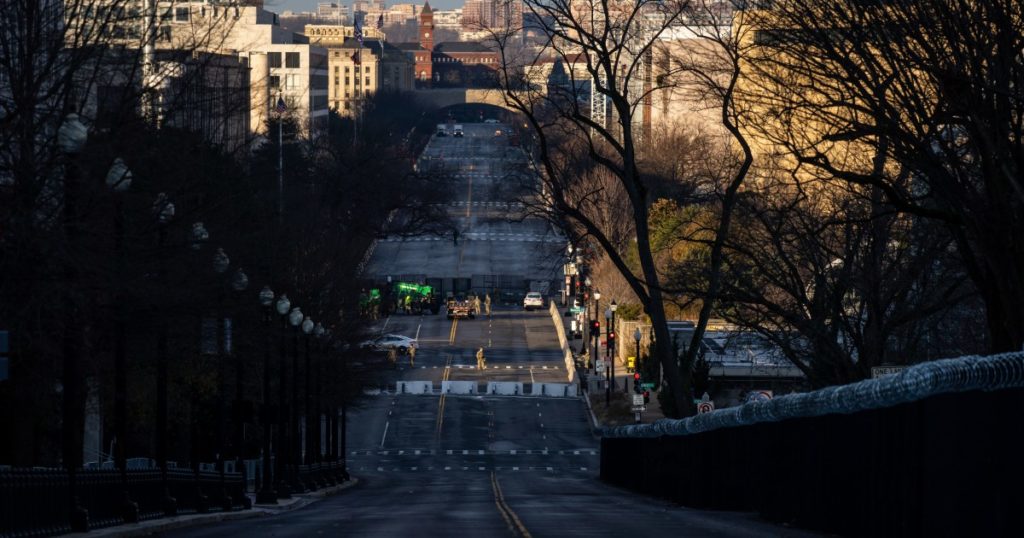 As troops with long guns patrolled a newly erected security fence surrounding much of Capitol Hill on Saturday, some neighbors were pleased by the tougher security presence while others were concerned by the level of force as police and National Guard troops fanned out ahead of possible violent far-right and nationalist rallies Sunday.

Dr. Julia Skapik, 41, who lives near the Capitol, said the stepped-up police activity made her feel safer and sent a strong message to would-be rioters: “There’s no opportunity here, so don’t even try.”

Some of her neighbors had left town, she said, while others had boarded up their homes and moved stray bricks into their backyards, afraid they might be hurled by potential attackers after last week’s deadly insurrection at the Capitol by pro-Trump extremists encouraged by the outgoing president.

“I’d much rather be here, because what the federal government has to muster is much more than the states,” she said.

Standing beside her, neighbor Edna Boone, also a healthcare worker, said she understood the need to send a message, but was also disturbed by the show of force, unable to sleep as convoys continued to arrive nightly.

The FBI warned law enforcement agencies across the nation last week that right-wing groups planned to stage protests in Washington and state capitals on Sunday. Fliers circulating online have urged people to gather at noon, “armed at your personal discretion.”

On Saturday, Democratic leaders of four congressional committees said they had contacted the FBI and other agencies and opened a review of the Jan. 6 assault on the Capitol to determine what had been known in advance about threats, whether the information was adequately shared, and whether foreign influence played any role.

Commercial airlines have tracked a recent increase in passengers checking firearms as they travel to the Washington area, according to a bulletin from the Justice Department, and several airlines have announced they will not allow passengers to check in guns.

More than 25,000 National Guard troops have been sent to secure the U.S. Capitol this week. Governors in California and over a half dozen other states have also deployed National Guard troops to protect their state capitals. In Oregon, state legislative leaders delayed a session set to start Tuesday by at least two days, citing security concerns.

Some national right-wing groups, including the Boogaloo Boys, Proud Boys, Oath Keepers and Three Percenters, sent warnings to followers not to attend weekend protests. Group members have speculated online that the protests were “false flags” staged by federal officials, who have already filed criminal charges against scores of participants in the Capitol insurrection.

“The domestic enemies of the Constitution are doing all they can to set up false flag events right now, across the nation,” Oath Keepers founder Stewart Rhodes wrote on the group’s website. “They WANT you to come armed to the state capitol where their paid provocateurs can rope innocent patriots into a staged false flag event. Don’t give them what they want.”

Rhodes told Oath Keepers and other militias to instead “muster” outside state capitols “in a friendly ‘red’ county where you have a patriotic constitutional sheriff, county commissioners, county judge.”

A channel called Boogaloo Intel Drop, created on Telegram after the attack on the Capitol, sent a note to more than 8,000 followers saying, “No, we’re not going to tell you to ‘show up on XX day and do XX’” because that would be “fedposting” — warning federal officials.

Others, like the Telegram channel Proud Boys Uncensored — with more than 35,500 followers — praised Ashli Babbitt, the San Diego veteran who died in the Capitol siege, and urged further insurrection.

“The mistakes the patriots at the Capitol made was they didn’t go far enough,” they wrote. “When they aggress against you it’s ‘the law’ and when your rage boils over at having zero representation or voice they call it terrorism.”

Late Friday, Wesley Allen Beeler, 31, of Front Royal, Va., was stopped with an unauthorized pass at a U.S. Capitol security checkpoint and arrested after authorities found a loaded 9-millimeter handgun and more than 500 rounds of ammunition in his pickup truck, which had stickers reading, “Assault life” and “If they come for your guns give ’em your bullets first.”

Beeler appeared in D.C. Superior Court on Saturday, where a judge ordered him to stay away from Washington and released him on his own recognizance.

In Florida, Republican Gov. Ron DeSantis signed an executive order activating the National Guard in the capital city of Tallahassee on Friday, hours after the FBI arrested a local man on allegations of threatening violence there this weekend. Daniel Baker, 33, an Army veteran, was charged with transmission of a threat to kidnap or injure, accused of posting a “call to arms” online Thursday, according to court records.

“This arrest serves as a message to anyone who intends to incite or commit violence … if you represent a threat to public safety, we will come for you, we will find you, and we will prosecute you,” Lawrence Keefe, U.S. attorney for the Northern District of Florida, said in a statement.

“If we learned anything from last week’s events, it is that we cannot risk being underprepared for the potential threat posed by those who wish to attack the citadel of democracy in our state and who may have been emboldened by the events of last week,” Dailey wrote on Twitter.

On Saturday, police set up barricades in front of Florida’s state Capitol and blocked nearby streets. Both Republican and Democratic state legislative leaders urged their staffs to work remotely in the coming days.

In Texas, Troy Anthony Smocks, 58, of Dallas, was charged Friday with transmitting threats after he traveled to Washington last week and reportedly posted on Parler that he would return armed for the inauguration and take action.

“Smocks threatened that he and others would ‘hunt these cowards down like the Traitors that each of them are,’ specifically threatening ‘RINOS, Dems, and Tech Execs,’” according to court records.

The Texas Department of Public Safety closed the state Capitol in Austin from late Friday through Wednesday due to what its director called, “violent extremists who may seek to exploit constitutionally protected events.” On Saturday, state troopers and Texas State Guard troops surrounded the grounds as a small group of protesters gathered on nearby sidewalk, some armed.

“We’re here to protect democracy,” said Rocky Reno, 42, wearing a camouflage flak vest and toting an AR-15-style rifle, joined by other self-described “peacekeepers.” “There’s no doubt this election was stolen.”

In Washington, the Eighty Percent Coalition, a group allied with President Trump, withdrew their request for a permit to protest near the Capitol on Saturday afternoon, but some Trump supporters still came to the area.

Trump supporter Milosh Jecmenic, a truck driver who splits his time between Washington and Miami, visited the security fence in Black Lives Matter Plaza to film video and take photographs of himself near a handful of anti-Trump protesters.

Jecmenic, 36, a Serbian immigrant wearing a U.S. flag protective mask, said he was unarmed, not affiliated with a group and not “a fanatic.” But he also defended those who stormed the Capitol, saying they had a right to protest. He noted that during Black Lives Matter protests, buildings were also damaged.

Jecmenic said he had a room at a nearby hostel and planned to stay through the inauguration to protest.

“I think there’s people in the city who are going to show up,” he said. “Some things are worth fighting for.”