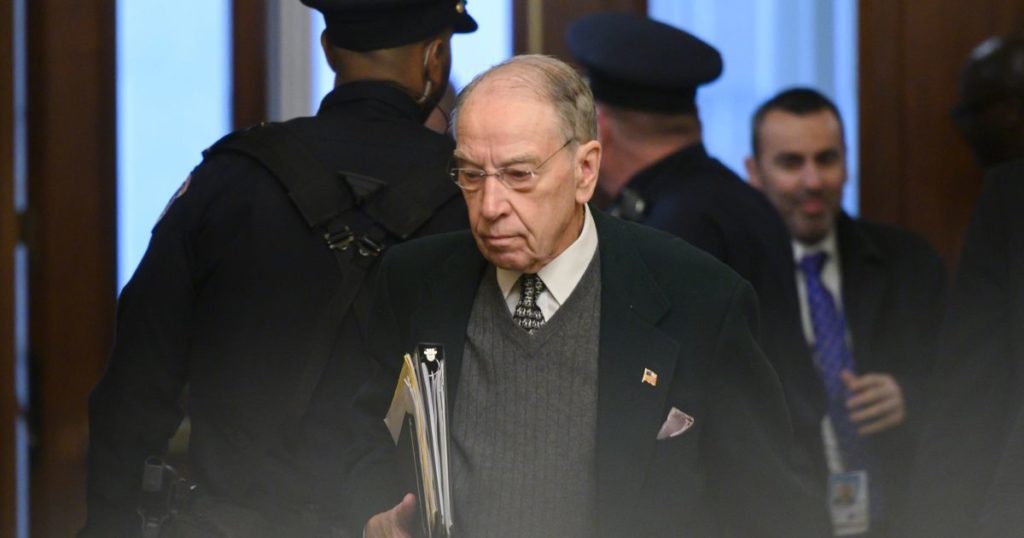 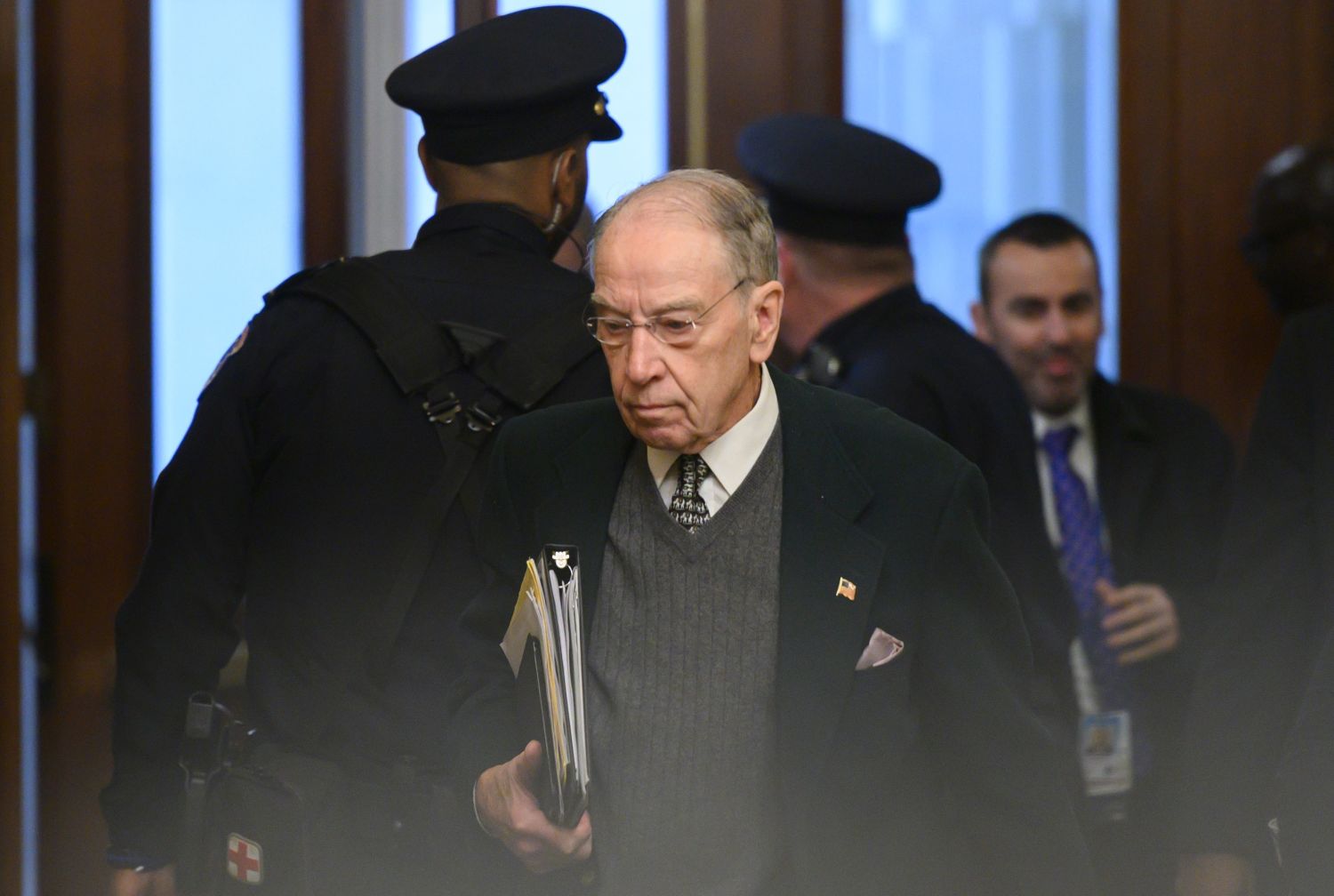 In the months-long struggle through 2009 to pass the Affordable Care Act, some Senate Democrats were so determined to give President Obama’s chief domestic initiative a bipartisan cast that they spent much time courting a few Republicans, especially senior Sen. Charles Grassley of Iowa.

Yet endless rounds of negotiations produced nothing, and Democrats began to feel as if they were being played. All hope was dashed when Grassley, at an Iowa town hall, promoted a Tea Party falsehood that the bill would establish “death panels” to give the government a voice in Americans’ end-of-life decisions.

“You have every right to fear,” he said. Iowans “should not have a government-run plan to decide when to pull the plug on grandma.”

At the White House a few weeks later, Obama finally sought closure. He asked Grassley: What if Democrats agreed to all his proposed changes — then would he support the bill? “I guess not, Mr. President,” Grassley replied, according to Obama’s memoir.

Thus ended the quixotic search for bipartisan support that proved so costly. It delayed passage of Obama’s signature achievement into 2010, forcing compromises that won no Republican votes and ensuring that voters didn’t see much benefit from the new law before that year’s midterm elections, which delivered big GOP gains.

The experience was a searing one for Democrats, not least because it followed Republicans’ near-total rejection of Obama’s economic-rescue package amid the worst recession since the Depression. The episodes haunt Democrats today as they try to advance President Biden’s $1.9-trillion COVID relief plan, balancing his desire for bipartisanship — he promised, after all, to work with Republicans — against the lesson many took from their 2009-10 experience: Seeking Republican support for an ambitious program is likely a fool’s errand.

That’s a major reason why most Democrats in Congress, as well as White House advisors and Biden too, are pushing a go-big, go-fast strategy.

Addressing reporters in the Oval Office alongside newly confirmed Treasury Secretary Janet Yellen on Friday, Biden emphasized the urgency of taking sweeping action. “There is no time to delay,” he said. “We have learned from past crises that the risk is not doing too much. The risk is not doing enough.”

Later, asked if he backed Democratic congressional leaders’ plans to use a fast-track budget process that wouldn’t require Republican votes, Biden said, “I support passing COVID relief with support from Republicans if we can get it. But the COVID relief has to pass. There’s no ifs, ands or buts.”

Democrats, running the Senate with a 50-50 majority made possible only by the tie-breaking vote of Vice President Kamala Harris, are worried that no amount of negotiation will produce a bill acceptable to Democrats that will garner the 10 Republican votes needed to pass. Under ordinary procedures, 60 votes are required to bypass a filibuster.

Senate Majority Leader Chuck Schumer (D-N.Y.) is set to launch next week a fast-track procedure known as budget reconciliation that would allow Democrats to jam much of Biden’s proposal through with a simple 51-vote majority.

Given the economic stakes as the pandemic persists, Democrats are especially mindful of the standoff with Republicans that preceded the Obamacare experience — the one that ultimately produced a stimulus plan that pleased few.

Its scope was held to under $800 billion — down from the $1 trillion many economists thought necessary — in part to win a handful of Republican votes. As widely predicted, the package proved inadequate to the challenge of helping the nation recover quickly from the Great Recession.

“As big and as bold, as aggressive as the Recovery Act was in 2009,” Biden chief of staff Ron Klain recently told the Washington Post, “I think most experts now look back and say it wasn’t large enough, it didn’t do all the things we needed it to do, and our recovery lagged as a result.”

Applying that thinking to the current situation, Schumer said in the Senate Thursday, “The dangers of undershooting our response are far greater than overshooting. We should have learned the lesson, in 2008 and 2009, when Congress was too timid and constrained in its response to the global financial crisis. It took years for the economy to get out of recession. We must not repeat that mistake today.”

The pressure for quick action is heightened by the risk of Democrats’ losing their 50-50 Senate majority at a moment’s notice — a prospect vividly underscored this week when 80-year-old Sen. Pat Leahy (D-Vt.) had a health scare. On Obamacare, delayed action led to a weaker bill because, midway through the process, Democrats lost their critical 60th vote when Sen. Edward M. Kennedy of Massachusetts died.

Many top Biden aides were intimately involved in the Obama administration’s legislative efforts in 2009 and 2010, but none more than Biden himself. A 36-year veteran of the Senate, he often led efforts to bring Republican lawmakers onboard.

In his first days as president, Biden has reminded staffers that the three Republicans who did support the 2009 economic-recovery bill did so only at the last minute, according to a senior administration official. Given his relationships with a number of lawmakers, he has been eager to call Republicans whenever he sees an opening.

In the hunt for bipartisan support, White House economic advisor Brian Deese, along with presidential counselor Steve Ricchetti and legislative affairs director Louisa Terrell, met Sunday on a video call with a group of 16 moderate lawmakers from both parties.

Several Republicans on that call have expressed frustration, according to a Senate GOP aide, that the administration didn’t consult them before writing the bill and has thus far resisted their requests, which mainly are aimed at reducing the size of the package.

Few Democrats on Capitol Hill and inside the West Wing are holding their breath for Republican support, not wanting, as one senior administration official put it, to go down a “months-long rabbit hole and allow them to have control over when people get relief.”

Deese, in an interview Friday, said that the administration has worked hard to respond to questions and concerns from lawmakers, especially Republicans’ complaints about the package’s cost. Officials have used economic data showing a slowing recovery to underscore the need for urgent, bold action, as well as projections from economists and independent market analysts.

“The genuine and robust desire to engage, to listen across the board is absolutely there,” he said. “But we can’t be in a situation where we fail to speak to that urgency.”

Deese, who during the Obama administration helped on the auto industry’s bailout, said there is “broad agreement” among Democrats and Republicans about the need to finance direct relief, vaccine distribution and expanded testing. Biden is open to more narrowly targeting the direct payments to low- and middle-income Americans, he added.

“The president has a plan and the plan is well justified,” Deese said. “We’ve got to move beyond that to a question of ‘We need to act and are you prepared to do that?’”

Much of the White House’s effort has been focused on Democrats to shore up support for quick action. In a briefing for Senate Democrats Thursday, Deese and Jeff Zients, Biden’s COVID-19 response czar, emphasized the urgency of bold action, offering data showing the negative economic effect if vaccine distribution isn’t expedited, according to one person who took part.

Democrats’ quick turn to a fast-track strategy that gives short shrift to Republican votes is a testament to how much has changed in the last 12 years.

When Obama took office, it was not clear that he would be faced with a Republican Party hellbent on opposing him at every turn. It was a time when the parties still occasionally worked together on big issues, and Republicans were widely believed to be under some pressure to cooperate with Obama because he and congressional Democrats had something of a mandate from their big wins in 2008.

Still, faced with the worst financial crisis since the Depression, Obama’s first decision about how much aid to seek was tempered by expectations of what Republicans might support. Although some advisors were calling for $1 trillion or more, others balked, especially in the wake of the unpopular bank bailout passed in late 2008, at the end of the Bush administration.

In his memoir, Obama recalls his chief of staff, Rahm Emanuel, saying, “Any number that ‘began with a t’ would be a nonstarter with lots of Democrats, not to mention Republicans,” while then-Vice President Biden nodded in agreement.

The $787-billion plan included many tax cuts in a nod to Republicans’ preferred means of stimulating the economy. Yet no Republicans voted for it in the House and only three did so in the Senate. Even those three defections steeled the determination of Senate Republican Leader Mitch McConnell to maintain party unity against the next Obama initiative, his healthcare bill.

“My goal was clear from the beginning,” McConnell wrote in his memoir. “Because this was the worst bill to come across my desk in nearly three decades I’d served in the Senate. … I didn’t want a single Republican to vote for it.”

The healthcare bill was held up for months in the Senate Finance Committee while Chairman Max Baucus (D-Mont.) sought buy-in from Grassley and other Republicans on the committee. It never materialized; Sen. Olympia Snowe (R-Maine) supported it in committee but voted against the bill in the Senate.

To this day, Baucus does not see that experience as other Democrats do, as the death knell for bipartisanship in the Senate. And he believes that Biden, with the nation in crisis, has more leverage to win Republican support than Baucus did in negotiating over healthcare.

“I think he should get as much as he can — he won’t get $1.9 trillion — with Republican agreement,” Baucus said of Biden, in an interview. “Then he’ll be able to get more later. He will set the stage for cooperation later and the public will deeply appreciate that.”

Brian Fallon, a former aide to Schumer, says that giving up the hope of a bipartisan bill may come hard to Biden, but the most important thing politically is what Congress passes, not how it does so.

“The best chance of staving off some kind of backlash,” Fallon said, “is not to scurry around trying to create all the appearances of bipartisanship, but to pass things that make a meaningful difference in people’s lives.”