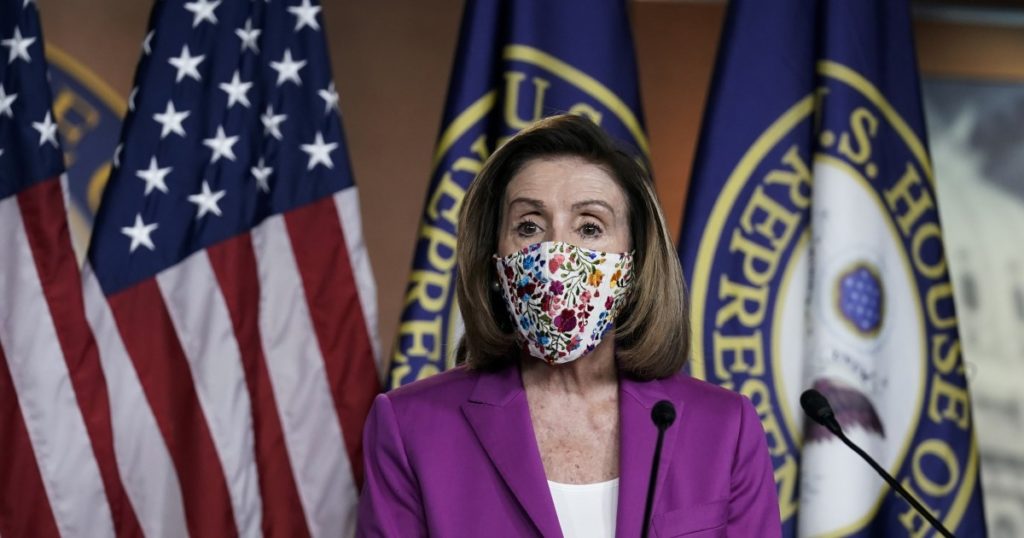 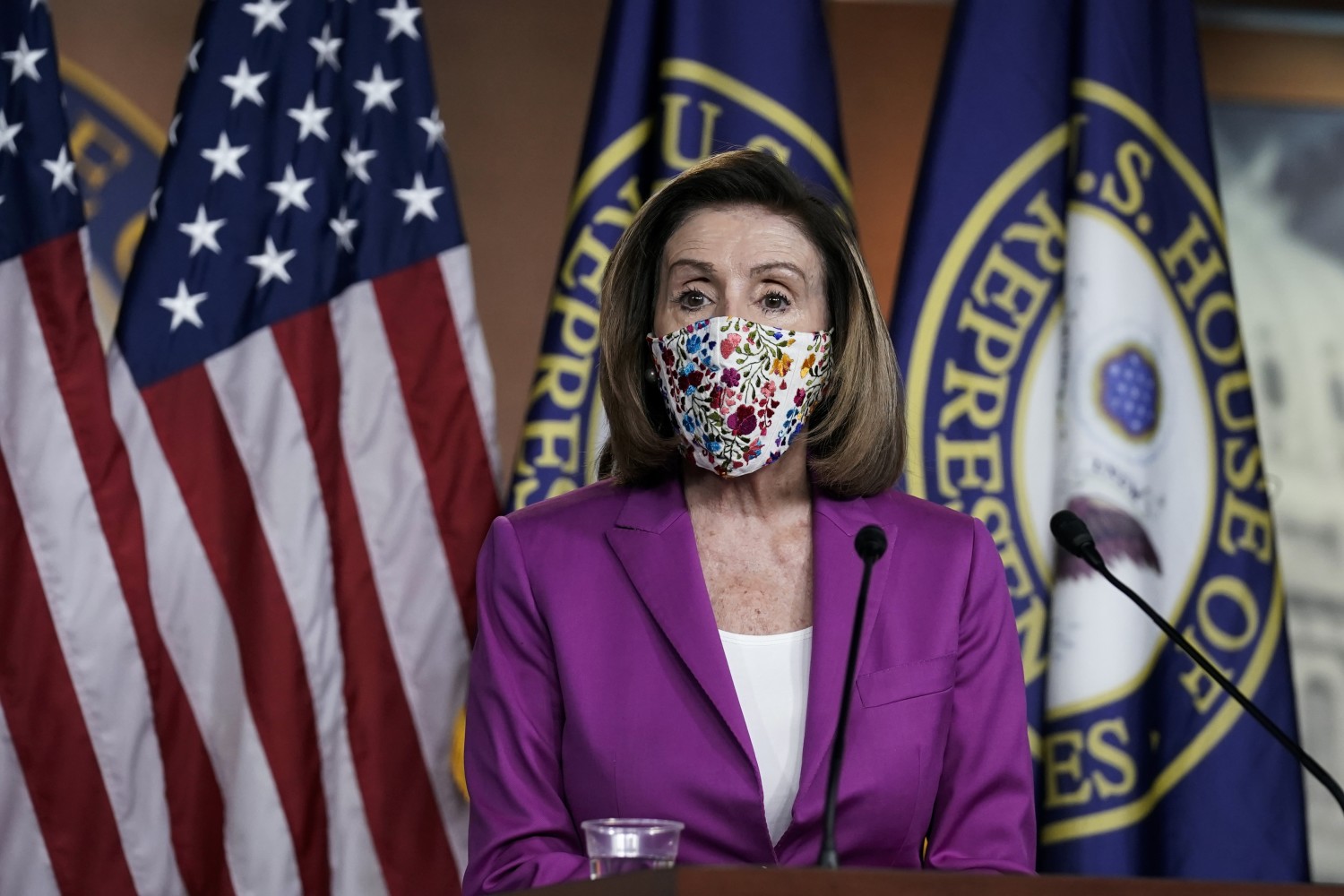 WASHINGTON — Amid mounting pressure to remove President Trump from office, House Speaker Nancy Pelosi on Friday spoke to the nation’s military leadership about taking precautions against Trump initiating a military action or nuclear strike in the waning days of his presidency.

“This morning, I spoke to the Chairman of the Joint Chiefs of Staff Mark Milley to discuss available precautions for preventing an unstable president from initiating military hostilities or accessing the launch codes and ordering a nuclear strike,” Pelosi said in a letter to her Democratic House colleagues Friday.

“The situation of this unhinged President could not be more dangerous, and we must do everything that we can to protect the American people from his unbalanced assault on our country and our democracy.”

The Pelosi letter was released just before House Democrats were scheduled to hold a closed caucus meeting to discuss impeachment or other steps to remove Trump from office because of his role in inciting a violent siege of the Capitol.

House Democrats said an impeachment vote could come as early as next week, although it seemed unlikely that the Republican-controlled Senate would be willing or able to act before Trump’s scheduled departure from the White House.

A growing number of Republicans have blamed Trump for fomenting his supporters’ violence and have begun distancing themselves from Trump out of fear for the damage he has inflicted on the party that has rallied around him for four years. But few are embracing an early departure as a remedy.

“If Speaker Pelosi pushes impeachment in the last days of the Trump presidency it will do more harm than good,” Sen. Lindsey Graham (R., S.C.) said on Twitter, a day after criticizing Trump for his role in the Capitol violence.

Democrats and some Republicans have been calling for Trump’s removal from office even though he is due to leave in two weeks in part because they worry he will act recklessly, especially on military matters. A spokesman for Milley did not have an immediate comment on Pelosi’s statement.

An effort by Pelosi to win explicit assurances from Milley that he will restrict Trump’s ability to order a nuclear strike isn’t likely to work.

The procedures for carrying out nuclear attacks are explicit and built around making sure the president can quickly order an attack from anywhere at any time.

By law, the president is the sole government official who can order a nuclear strike, though such an order has to be verified as legal by the Secretary of Defense.

The order would be transmitted to the head of the Pentagon’s Strategic Command, whose role is to verify it is legal and then execute it. Milley as chairman of the Joint Chiefs is not part of the formal chain of command but in theory would advise the president and the Defense Secretary in discussion on using nuclear weapons.

Trump also already has access to codes necessary to order use of nuclear weapons. A military aide with the codes works at the White House and is kept in the president’s vicinity.

Pelosi discussed the prospect of impeachment with her leadership team Thursday night, hours after announcing the House was willing to act if Vice President Mike Pence and other officials did not invoke Section 4 of the 25th Amendment — the forceful removal of Trump from power by his own Cabinet.

Five people are now dead from the violent melee, including police officer Brian Sicknick. Pelosi said in a statement Friday that Sicknick’s death “reminds us of our obligation to those we serve: to protect our country from all threats foreign and domestic.”

She said those responsible for the death of the officer “must be brought to justice.”

Though Trump has less than two weeks in office, lawmakers and even some in his administration began discussing options for his removal Wednesday afternoon as Trump first encouraged the crowd to march on the Capitol, then refused to forcefully condemn the violent assault and appeared to excuse it.

Rep. Katherine Clark, a member of House Democratic leadership, said procedural steps could allow them to move far quicker than they did on Trump’s impeachment last year.

“I can confirm that we have had discussions about it, and I would hope that the speaker would move forward if the vice president refuses to do what he is required to do under the Constitution,” said Rep. James Clyburn, the No. 3 House Democrat, on CNN. “Everyone knows that this president is deranged.”

“The president has disregarded his oath of office,” Sasse said Friday on “CBS This Morning.” He said Trump’s inciting the mob to storm the Capitol was “wicked.”

If the House impeaches, “I will definitely consider whatever articles they might move,” Sasse said.

Pelosi and Senate Democratic leader Chuck Schumer have called for Trump’s Cabinet to invoke the 25th Amendment to the Constitution to force Trump from office before President-elect Joe Biden is inaugurated on Jan. 20. Schumer said he and Pelosi tried to call Pence early Thursday to discuss that option but were unable to connect with him.

“Do they stand by these actions?” Pelosi asked. “Are they ready to say that for the next 13 days this dangerous man can do further harm to our country?”

Most Democrats, and many Republicans, put the blame squarely on Trump after hundreds of protesters bearing Trump flags and clothing broke into the Capitol on Wednesday and caused destruction and mass evacuations. The president had urged his supporters to protest as Congress was counting the electoral votes that confirmed Joe Biden’s win.

Pelosi said “a threshold was crossed of such magnitude” that Trump should not be allowed to make any decisions.

Three Democrats on the House Judiciary Committee began Thursday to circulate articles of impeachment. Reps. David Cicilline of Rhode Island, Jamie Raskin of Maryland and Ted Lieu of California wrote in the articles that Trump “willfully made statements that encouraged — and foreseeably resulted in — imminent lawless action at the Capitol.”

The House impeached Trump in 2019, but the Republican-led Senate acquitted him in early 2020.

Pence has not publicly addressed the possibility of invoking the 25th Amendment, but that possibility may have faded after two Cabinet members resigned Thursday in protest after Trump egged on protesters who then mounted the deadly assault on the Capitol.

Yet senior Trump administration officials did raise the long-shot possibility as the chaos unfolded at the Capitol. Officials across the government went so far as to study up on the procedures for declaring Trump “unable to discharge the powers and duties of his office.”

No member of the Cabinet has publicly expressed support for the move, which would make Pence the acting president. But several were believed to be sympathetic to the notion, believing Trump is too volatile in his waning days before Biden’s inauguration on Jan. 20.

Under the 25th Amendment, Trump could dispute his Cabinet’s finding, but the Cabinet could quickly reaffirm its position, keeping Pence in power while the question fell to lawmakers.

While the House could quickly vote to impeach Trump, it is extremely unlikely that Congress could remove the president in the next 13 days. The Senate would have to receive the articles and then hold a trial and vote on them.

And even if it did so, the Republican Senate would be unlikely to vote to convict. Democrats are set to narrowly take the Senate when Biden is inaugurated, but Senate Majority Leader Mitch McConnell holds the gavel until then.

But in one measure of the uncomfortable position that Trump’s goading of the mob had placed Republican lawmakers, there was a noteworthy lack of GOP statements attacking Democrats’ calls for his removal.

Biden distanced himself from his fellow Democrats’ push to oust Trump with the 25th Amendment. Andrew Bates, a spokesman for the president-elect, said Biden was focused on taking office on Jan. 20 “and will leave it to Vice President Pence, the Cabinet and the Congress to act as they see fit.”

Times reporter David Cloud and the Associated Press contributed to this story.