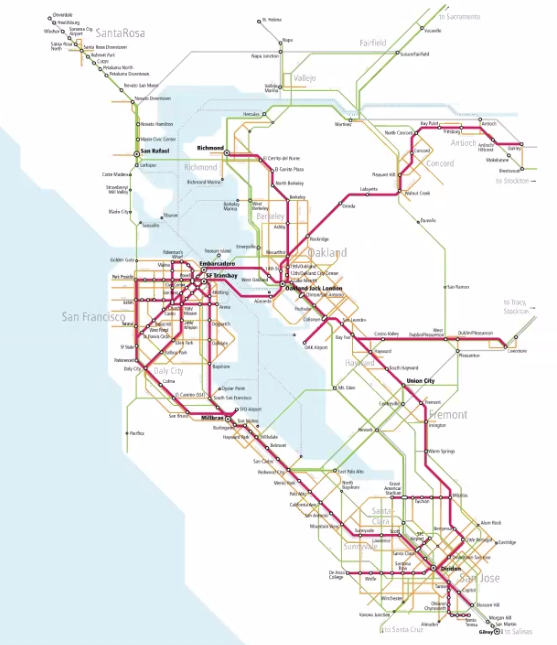 It’s a cliché that happens to be true: crisis creates opportunity.

That was a major theme of a Seamless Bay Area’s webinar, Transit Governance Models and Options for the Bay Area, held Thursday afternoon. This is “…a pivotal moment, with elected officials and transit leaders in discussion about the future of Bay Area transit as we emerge from the COVID crisis,” said Ratna Amin, with Deutsche Bahn Engineering and Consulting, and the panel’s moderator. “Opportunities to rethink governance are rare.”

And governance, or more precisely the overly complex governance of the Bay Area’s 27-some transit operators, has resulted in a disjointed, uncoordinated and confusing system of fares and schedules that deter ridership. Just putting an org chart together of the Bay Area’s transit governance was a major endeavor for Seamless Bay Area’s Ian Griffith. “And I work in this industry!” he said, showing the chart below that attempts to sum up all the transit agencies and inter-agency bureaucracies.

How are lay people supposed to figure all this out when deciding whether to take transit or drive?

The end result is a system of fiefdoms where riders have to pay every time they transfer from AC Transit, to BART, to Muni, to Caltrain, or whatever agency, to a point that it was helping reduce ridership even before the pandemic struck. That’s why the Bay Area needs a single fare structure “…regardless of mode or transit agency, even though there are multiple agencies,” said Michelle DeRobertis, co-author of a study for the Mineta Transportation Institute that compared European, Canadian, and Australian governance structures for transit. She added that there needs to be “free transfers region wide.”

But how do advocates get historically uncooperative transit agencies to give up cherished “revenue neutrality” and agree to a coordinated fare structure that could, at least in the short term, cost an agency revenue? That’s what the panelists are figuring out now. First step: deciding which region in the world provides the best model for the Bay Area.

Different cities either have a single regional transit agency–think of Boston or Philadelphia–that runs all the buses, subways and regional trains. Other cities, such as Zurich or London, combine different public and private operators under a common brand and fare structure, which is administered by single entity or “regional network manager.”

Given the Bay Area’s inherent complexity, the panelists seemed to favor the network manager concept, with the individual operators continuing to operate as independent agencies under its umbrella.

Griffiths was clear, however, that more bureaucracy is not the answer. “…we don’t need another layer on the 150 agencies we already have. So evolve MTC or evolve a transit agency or multiple transit agencies” into a network manager, he said.

That either means legislation that would change MTC’s structure and authority so that it can dictate fares and schedules of participating agencies. Or it might mean putting everything under BART or Caltrain–or, as Griffiths discussed, some combination of the two. “We think BART and Caltrain would be a good option to bring together regardless,” he opined, given that they already operate cross multiple counties and their systems connect or will soon connect at Millbrae, Richmond, and San Jose.

And since BART already helps manage Amtrak’s Capitol Corridor between San Jose and Sacramento (with trains that are compatible with Caltrain) there are many opportunities for collaboration on capital projects, such as a second Transbay tube.

But whatever model is followed, it’s clear the current structure isn’t working. “Why does my bus not run on time?” asked Paul Lewis of the Eno Center for Transportation. “A lot of it boils down to governance… it’s how decisions get made and it’s how funding and capital planning come together.”

And without governance reform, the Bay Area’s transportation network will forever be handicapped. The time to act on it has arrived, said the panelists. “We can’t have this discussion go on for years and years longer,” said Griffiths. “We want progress by the end of this year to pass legislation to bring about a new management structure.”

To watch the full discussion and learn more about efforts to reform the Bay Area’s transportation network, click HERE.