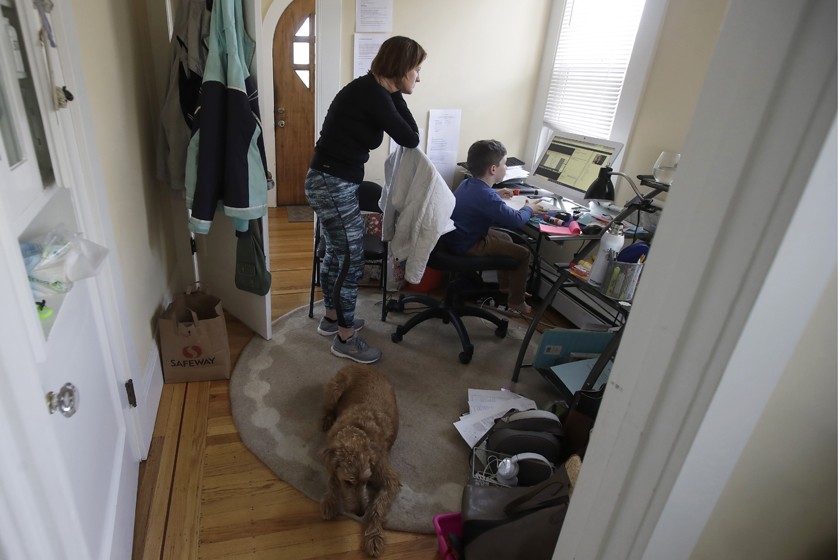 Mothers with outside employment, among the hardest-hit by the COVID-19 recession, are returning to the workforce in impressive numbers, aided by the reopening of schools and daycare programs.

But the pandemic has exacted a heavy toll on millions of moms in terms of job security, pay equity and long-term career opportunities — losses many will likely never recover.

Because of increased childcare responsibilities brought on by school and daycare closings, many women say they had little choice but to leave their jobs or take on reduced responsibilities.

And contrary to the hope that working from home would make it easier for women to balance the new demands placed on them, it’s teleworking moms who may be struggling the most or falling out of the labor force, said Misty Heggeness, a senior advisor and research economist at the U.S. Census Bureau.

“They are getting extremely burned out, because in addition to trying to figure out how to do their job at home in a telework situation, they’re also providing care to their children. And that kind of multitasking is extremely hard,” said Heggeness, who herself is a mother of two middle schoolers and has been working from home.

She and other experts fear the pandemic’s long-term effects will deprive the economy of needed productive workers and set back decades of advances that women had made professionally and in corporate America, including narrowing the pay gap with men.

About one-third of all mothers in the workforce have scaled back or left their jobs, or plan to do so, according to a survey by Seramount, a consulting firm that focuses on workplace inclusion. That’s roughly 8 million workers.

Marian Millikan, 37, is one of them. “After 14 years with the same company, I was almost there,” she wrote of her goal of making partner at a national accounting firm in Richmond, Va.

When COVID-19 shut down schools and daycare centers in March 2020, Millikan worked remotely while essentially home-schooling her two children, then 6 and 8.

It was peak tax season. She shoehorned Zoom meetings with clients in between the needs of her kids. She worked at nights and on weekends.

Her husband helped out, but after a month and a half, bone-tired and emotionally drained, Millikan went to her employer to see whether some accommodations could be made.

“I was told, ‘But we need you to do all the hours that you do. There’s a lot of work that needs to be done,’” she said in an interview.

In early May last year, Millikan quit, but not before agonizing over her decision.

Part of it was that she didn’t want to let people down, Millikan said; she was always complimented for juggling the demands of being a mother with a corporate career. “I didn’t want to seem like I was quitting when things got tough, because that’s not what I wanted it to be,” she said.

Millikan has since joined a small practice with several other accountants. She makes a lot less, but said she has more time with her children and has refocused her career on helping small businesses.

Employers are hoping that many more mothers will return to jobs this fall as schools open for in-person classes. Women are vital to ending widespread labor shortages that have held back businesses and slowed the overall economic recovery.

Total employment of women with children under 18 was at nearly 23 million in July, down by about 1 million from two years ago.

For women with school-age children, the unemployment rate — after jumping to 13.4% in April of last year — was at 5.4% last month. That’s slightly lower than the comparable jobless figure for all workers, though experts fear the coronavirus’ Delta variant could set things back again.

Kelly Mann of Raleigh, N.C., is among the women who have just returned to the workforce, but in a different job. It pays a fourth of her previous salary.

Last year, Mann was a top manager responsible for rolling out McGraw Hill’s remote teaching courseware for the mid-Atlantic region. “It was sort of my dream job. I laid the groundwork for this job for years,” she said.

But when her three daughters, ages 11, 12 and 14, were suddenly faced with schooling at home in front of a single computer, Mann quit the job.

“I knew there was not a chance my children would navigate learning online with their different schedules without my full-time support.” She added that her husband could not step back from his job because the family needed his larger salary.

Mann was so disappointed in the public school system’s handling of the pandemic that she became an advocate for in-person learning, and is moving two of her children to private school this fall. That means Mann has had to start earning money again. So this month she began a new job as an outreach coordinator for a nonprofit focusing on education.

At 49, Mann said, “I’m very much at the age where, when you leave a career at the level I was at, it’s going to be extremely challenging to re-enter.”

Laura Sherbin, an economist at Seramount, said studies show that relatively few women who take extended time off regain the careers they once had.

“Traditionally it’s been very, very hard for women to take their foot off the gas and be able to put their foot back on, because the recruiting models and the models in the labor market really didn’t permit it,” Sherbin said.

Many experts expect that when updated salary data by gender are released, they will show a significant reversal for women after decades of steadily gaining ground.

For many mothers, “their entire lifetime earnings trajectory is stunted and on a totally different path because they’re pulling back today,” said Heggeness, the Census Bureau economist.

And the rise in remote work from home may be of much less help for women’s careers than people think, she said.

What pains Lakshmi Swamy, a 41-year-old pediatric eye surgeon in North Carolina, is the cost to patients and the community at large when physicians and other critical healthcare workers have to scale back or leave their jobs.

Before the pandemic, Swamy was treating premature infants at four hospitals in Wake County, on call for trauma emergencies eight weeks of the year, running her own outpatient surgical practice and doing pro-bono work.

When her 13-year-old son started losing interest in learning online — “his emotional state just tanked,” she said — Swamy created a detailed curriculum and worked closely with him from 8 a.m. to 3 p.m. Monday through Friday.

The tradeoff was a pullback from her outpatient practice. She had to do her own triage to concentrate the little time she had to work on high-risk cases.

Swamy said there’s a serious shortage of specialist clinicians like her, but she doesn’t see how she can return to her previous schedule.

“It’s justified right now because this is what my family needs,” she said. “But that is the guilt that keeps me up at night.”