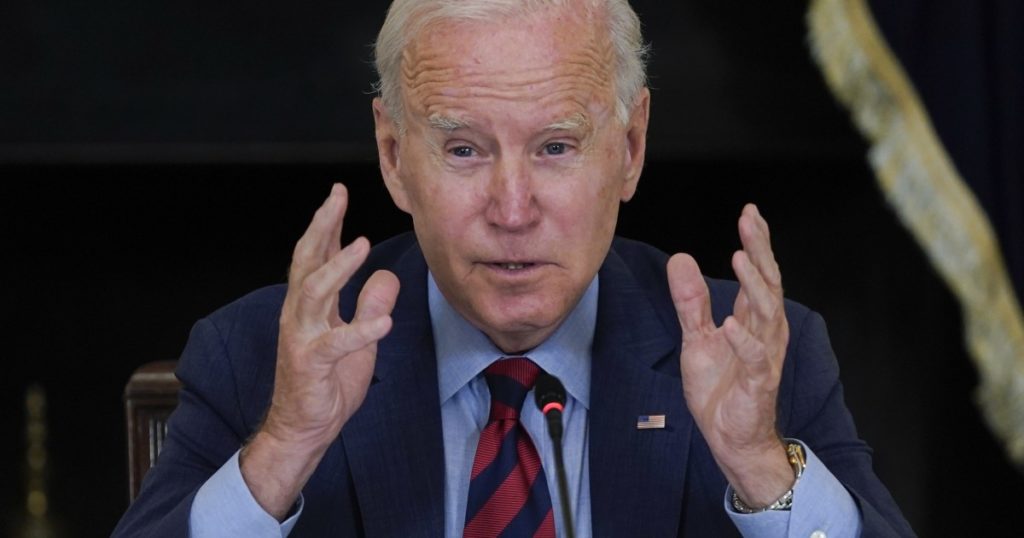 Latino leaders have become the focus of a revamped and recharged outreach strategy from Democrats, including a high-profile sitdown on Tuesday with President Biden at the White House.

Judging by how participants described the meeting afterward, Democrats and Biden are making progress but there is a lot more work to do, highlighting the political stakes facing the party as it heads into a difficult election cycle.

“It’s a new day in the White House and the country,” Nathalie Reyes, leader of the Latino Victory Project, declared outside the West Wing. “This is an administration we can work with.”

Arturo Vargas, head of the National Assn. of Latino Elected and Appointed Officials Educational Fund, wanted to know what took the president so long to extend the invitation in the first place.

“It was long overdue,” he said. “We expect to be back much more often.”

The meeting took place on the second anniversary of the El Paso shooting, when a gunman allegedly targeted Latino shoppers at a Walmart in the Texas border town, a sign that the Biden administration understood how tumultuous recent years have been for Latinos. Twenty-three people were killed in the attack.

“I know how hard these anniversaries are,” Biden said. “No matter how much time has passed, it brings it all back like it happened that second.”

Among the groups attending the White House session were several organizations, including Mi Familia Vota and Voto Latino, dedicated to boosting voter turnout. Democrats have been reevaluating their efforts to win over Latino voters after last year’s election, which gave the party control of the White House and Congress but fell short of expectations.

In the hopes of laying groundwork to increase their share of the Latino vote in next year’s midterms, a coalition of progressive groups plans to spend $100 million this month promoting Biden’s agenda, including a particular focus on Spanish-language messaging.

Building Back Together, the political nonprofit led by Biden’s allies that’s coordinating the advertising drive, announced earlier this year that it would run an “always-on” campaign to continuously communicate with Latino voters.

Chuck Rocha, a Latino political consultant who founded Nuestro PAC, said Democrats are starting their outreach earlier than ever to avoid Latinos feeling like an afterthought before an election.

“I’ve never seen people spend that much money in the off year,” he said.

Daniel Garza, president of the Libre Initiative, a conservative Latino group, doubts it will work.

“Latinos want what the Democrats can’t give us,” he said, including tough-on-crime measures, free-market policies and tax cuts.

The recognition on Tuesday of the El Paso slayings emphasized how the mass shooting was a “punch in the gut for many Latinos,” said Efrén Pérez, a political science and psychology professor at UCLA, because it occurred in a place where native-born Latinos are woven into the fabric of the city.

“It basically a paragon for what the future may look like,” Pérez said of the border city. He said Democrats should take the opportunity in memorializing the event to have frank conversations about the enduring racism in the country.

Biden wrote a column for the El Paso Times on Tuesday, saying “this somber day is a reminder of the unfinished work to heal the soul of this nation.”

“Two years ago, a gunman armed with rage and rifle targeted the people of El Paso, and our most deeply held American values. He chose this city defined by its diversity that celebrates its rich Hispanic heritage and connection with the people of Ciudad Juárez,” across the border in Mexico, Biden wrote. “He thought that his hatred of immigrants could prove more powerful than the culture and vibrancy of the people of this community. He was wrong.”

The White House has labored to highlight Biden’s commitment to Latinos. Biden has also placed more Latinos in his Cabinet than any previous president, and named Latinas to key positions in the White House. Emmy Ruiz, a longtime Democratic strategist raised in Texas by Mexican immigrant parents, serves as political director. Julie Chavez Rodriguez, the granddaughter of legendary California labor leader Cesar Chavez, is the point person for local and state governments.

Activists say initiatives such as the monthly child tax credit included in this spring’s COVID-19 relief package are a good sign that Democrats are attuned to the financial concerns of this key constituency. But Biden and Democrats could do more, advocates say, to demonstrate the benefits of Biden’s economic agenda to Latinos. In particular, they’ve pushed for extending the eviction moratorium and increasing the federal minimum wage to $15 an hour.

“It’s been good to see it put at the forefront of the Biden administration,” said Cristina Tzintzún Ramirez, executive director of NextGen, a nonprofit group focused on turning out young voters. “And at the same time, I think that people are desperately anxious to see it move faster.”

Although Democrats have long assumed that Latino voters would be a natural fit on their side of the political aisle, the last presidential election was a wakeup call after years of grumbling from that sector that the party was taking them for granted. Biden won the majority of Latino votes, but President Trump increased his share despite his far-right rhetoric on immigration.

“The Latino community is starting to flex its political power,” Ramirez said. “It’s clear that they prefer the Democratic Party, but also the Democratic Party has a lot of room to grow to be able to effectively reach and deliver for our communities.”

An analysis from the Pew Research Center said Trump won 38% of the Latino vote in 2020, up from 28% four years earlier.

Although his support was most notable among Miami’s Cuban emigres, who helped Trump win Florida for the second time, he also did better among Latino voters in Texas and other states.

Rep. Raul Ruiz (D-Palm Desert), chair of the Congressional Hispanic Caucus, said there were “some lessons learned” from the election.

“Latinos are not a monolith, and we shouldn’t be looking at, or discussing the Latino vote in the singular,” he said. “A Southern Californian Chicano is different than New Mexican Mexican-American versus a Texan Latino versus a Cuban in Miami, Puerto Rican in New York or Dominican in Boston.”

The pandemic upended the political calculation for some Latino voters, with immigration fading from the headlines and concerns over public health and the economy taking center stage.

Back in 2016, Ramirez said, she spoke with working-class Latinos who were “terrified that Trump was going to win.”

“In 2020 they were calling me and asking, ‘When is the economy going to reopen? Because I don’t know how much longer I can survive,’” she said.

The COVID-19 pandemic has been particularly damaging to Latinos’ health and financial well-being, according to a survey last month from Pew. More than half of Latino adults said a family member or close friend has been hospitalized or died from the virus. Roughly the same percentage reported losing a job or taking a pay cut during the pandemic, underscoring the push by some Latino politicians for continued economic assistance.

Despite these hardships, Latinos were broadly optimistic that the worst of COVID-19 is over, and 49% of adults are satisfied the direction of the country — the highest satisfaction rating in nearly a decade.

Democrats are debating whether to include immigration changes, including a pathway to citizenship for people without legal status in the country, in a massive budget proposal that’s being formulated on Capitol Hill. The goal would be to approve the legislation through the reconciliation process, which allows it to evade a potential Senate filibuster by Republicans, but it’s unclear whether such a maneuver would comply with the chamber’s rules.

“It’s all riding on this right now,” said Lorella Praeli, co-president of Community Change Action, after meeting with Biden.