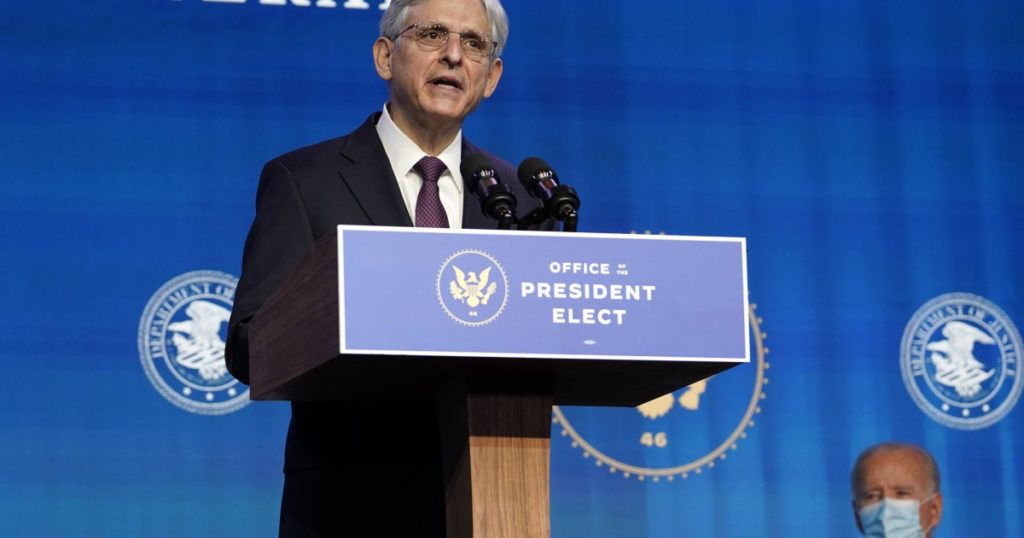 Arriving in Oklahoma City the night after the worst domestic terrorist attack in U.S. history, Merrick Garland grasped the enormity of the task ahead of him. Downtown resembled a war zone. Military vehicles blocked streets. For blocks, federal agents and police were busy collecting evidence. At the federal building, where 168 people had died in a massive bomb blast, rescue workers were combing rubble for victims, guided by the eerie glow of floodlights that seemed to Garland as bright as the noonday sun.

With shattered glass crunching underfoot on his way to the command center, Garland knew his Justice Department team would have to surmount obstacles typical of any big investigation. But he also understood broader societal forces required special attention if prosecutors hoped to win justice for those slain: Trust in law enforcement was eroding, America was awash in conspiracy theories, and the government didn’t have a grip on the threat posed by right-wing extremists.

Garland’s oversight of the bombing inquiry provides insights into how, as President Biden’s nominee to be the next attorney general, he would run the Justice Department, according to interviews with former prosecutors and agents, as well as a detailed oral history Garland provided in 2013 to the Oklahoma City National Memorial & Museum. Though the attack took place nearly 26 years ago, the former prosecutor’s experiences have become newly relevant as he seeks to lead the federal effort to hold accountable those responsible for the deadly siege last month of the U.S. Capitol and to prevent similar violence.

“Merrick Garland has seen the face of domestic terrorism,” said J. Gilmore Childers, a former Justice Department prosecutor who worked with Garland on the Oklahoma City case. “And he has learned how to recognize that face and what it stands for.”

Garland is expected to win easy confirmation from the Senate, which is scheduled to hold a hearing Monday on his nomination. If confirmed, the 68-year-old federal appellate judge will face serious challenges beyond those posed by extremists who stormed the U.S. Capitol.

He has been tasked with expeditiously implementing Biden administration policies that seek to beef up enforcement of civil and voting rights laws, and reduce racial disparities in the criminal justice system. He will also need to bolster morale at an agency that became mired in the Trump era over how it handled prosecutions of the president’s associates and the rollout of a special counsel’s report on Russian interference in the 2016 election while simultaneously overseeing politically sensitive investigations, including a tax inquiry on Hunter Biden, the president’s son.

Garland is sure to get tough questions from senators of both parties. Conservatives are likely to attack him about Biden administration policies they consider to be too liberal. Republican senators expressed similar apprehensions when they torpedoed Garland’s 2016 nomination to the Supreme Court following the death of Justice Antonin Scalia, a conservative icon. They argued at the time that Garland’s appointment would swing the high court too far to the left. The GOP-controlled Senate refused to consider the nomination, and left the seat vacant for the next president to fill — though it was nearly nine months before the election. President Trump succeeded in winning confirmation of Neil M. Gorsuch, a conservative federal appellate judge, to the seat.

Still, Garland has drawn support from influential Republicans. Sen. Lindsey Graham (R-S.C.), the party’s most recent Judiciary Committee chairman, tweeted shortly after news of Garland’s nomination became public that the judge was “a man of great character, integrity, and tremendous competency in the law.”

His nomination has generated muted enthusiasm from liberal activists concerned he too often sided with law enforcement as a judge, and Democratic senators are expected to ask him about his plans to enforce civil rights laws and the Justice Department’s role in reforming police departments.

Lawmakers are also likely to question him about whether Trump bears legal culpability in urging his followers last month to march to the Capitol before they stormed the complex.

Associates say the federal judge — whose nomination became public hours before the Capitol was besieged — will avoid commenting directly on Trump or the Capitol investigation, but may point to lessons he learned while overseeing the investigation into the Oklahoma City bombing.

Garland has called overseeing that inquiry the capstone of his legal career, which has included a two-decade stint on one of the nation’s most influential appeals courts. Then a top Justice Department official, he spent several weeks in bomb-devastated Oklahoma personally supervising prosecutors and agents before returning to Washington, where he continued to guide the department’s bombing trial preparations.

“This is the central thing, the most significant thing I worked on,” Garland said in the oral history with the Oklahoma City National Memorial, in which he spoke at length about his work on the case.

Lawyers, he added, are not always sure if they make a difference in a specific case. But he never felt that way about Oklahoma City. “Being there makes you feel like you had a role to play in the investigation,” he said, “helping pull people together, and it’s a very satisfying feeling for a lawyer.”

Garland, a 1977 graduate of Harvard Law School, worked in private practice, rising to partner of a major law firm before deciding he needed trial experience, he has said. In 1989, he left his lucrative job and joined the Justice Department as a prosecutor. A few years later, he was tapped by the Clinton administration to serve as principal assistant deputy attorney general, the top advisor to the deputy attorney general who runs the department’s day-to-day operations.

Garland was at his desk April 19, 1995, when an “Urgent Report” flashed across his computer screen. It said there had been explosion at 9:02 a.m. at the Alfred P. Murrah Federal Building. Within minutes, the horror became clear: A bomb had detonated and scores of people, including children in a day care center, were missing and presumed dead.

The Oklahoma City U.S. Attorney’s Office did not have the capacity to spearhead such a vast investigation. The day after the attack, Garland hopped on an FBI jet and headed west.

At first, the government suspected Islamic terrorists were behind the attack. But before Garland could land in Oklahoma, authorities arrested Timothy McVeigh, a former U.S. soldier who had become an anti-government zealot angry over the bloody 1993 storming of the Branch Davidians compound in Waco, Texas.

McVeigh’s initial court appearance was moved from the damaged federal courthouse to nearby Tinker Air Force Base, and Garland arranged that the hearing be open to the media and public, believing that conspiracy theories could be combatted with transparency.

When he met with prosecutors and investigators, he insisted that everyone “do everything by the book,” a mantra veterans of the inquiry still vividly recall. Garland, former agents and prosecutors said, understood missteps would be used to attack the legitimacy of the investigation by McVeigh’s defense team or anti-government extremists.

For example, former agents and prosecutors said, when a company offered to voluntarily turn over records, Garland ordered investigators to instead obtain the information with a subpoena. And when agents wanted to search a car for a second time, Garland told them to seek another warrant.

At the time, the O.J. Simpson trial was generating daily headlines detailing allegations of slipshod police work, and Garland did not want an Oklahoma City investigation to be criticized in the same way.

“It was the most recent sort of ‘Trial of the Century,’ which every few decades there is another trial of the century,” Garland said in the 2013 oral history. “There were a lot of issues in [the O.J. Simpson trial] about how the forensic evidence had been handled and also how the people involved, the investigators had handled themselves, and we wanted to be sure that we were not going to have that kind of circumstance.”

Former prosecutors said Garland’s assiduousness in Oklahoma City and his later assistance in supervising the trial team from Washington set the stage for a successful prosecution of McVeigh and a co-conspirator, Terry Nichols. McVeigh was eventually convicted and sentenced to death. He was executed in 2001. His co-conspirator, Terry Nichols, pleaded guilty and was sentenced to life in prison.

Through it all, Garland never betrayed emotion, not even when he and Donna Bucella, another Justice Department prosecutor, toured the devastated federal building, she said. With the stench of death in the air, they peered into the gaping hole left by the explosion and noticed a nearby workstation that hadn’t been touched — papers were perfectly stacked on a desk and a sport coat was draped without a wrinkle over a chair.

“We just looked at each other and nodded,” Bucella said. “That’s all you could do. It was a solemn moment.”

Jamie Gorelick, the deputy attorney general who sent Garland to Oklahoma City, said the future nominee was the right person for the job. A quick thinker, he made tough decisions but also wasn’t a micromanager.

“As attorney general, he would know he can’t run investigations, but he will make sure that the right questions are asked, the right resources are brought to bear,” Gorelick said. “That is certainly a lesson he learned from the Oklahoma City bombing.”

Garland has said he was so deeply affected by the bombing that he asked to remain in Oklahoma City to supervise the eventual trials. But Gorelick and Atty. Gen. Janet Reno rejected his request. After several weeks in Oklahoma City, Garland returned to Washington to help run the Justice Department.