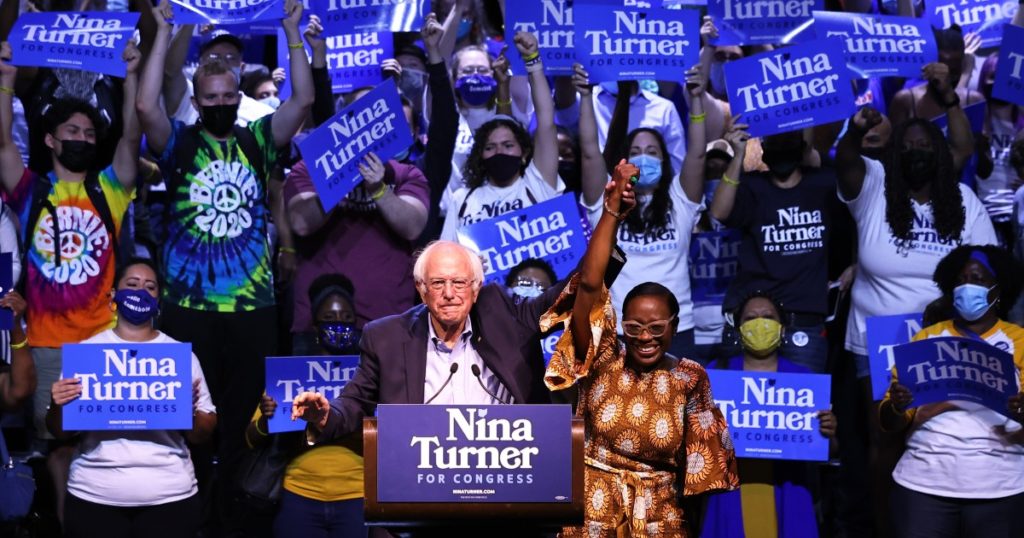 Two House special elections in Ohio on Tuesday are sharpening divisions within both political parties— and the results could indicate which factions gain the upper hand as Democrats and Republicans head into next year’s midterm fight for control of Congress.

In a nationally watched Cleveland contest, Democratic primary voters are choosing between two House candidates who personify the split between the party’s progressive activist wing and its more-moderate establishment.

Nina Turner, who was co-chair of Bernie Sanders’ 2020 presidential campaign, has been endorsed by a who’s who of national progressive leaders and celebrities. Her principal rival is Shontel Brown, a local Democratic official who is backed by Hillary Clinton, Sanders’ rival for president in 2016, and Rep. James E. Clyburn (D-S.C.), a powerful ally of President Biden.

Meanwhile, in a GOP House primary near Columbus, former President Trump is facing a fresh test of his sway in the Republican party: He has endorsed coal lobbyist Mike Carey, plucking him from a crowded field of Republican candidates that includes more established local political leaders.

The special-election primaries — to replace Cleveland Democrat Marcia Fudge, who left the House to join Biden’s Cabinet, and Republican Steve Stivers, who quit his Columbus-area seat for the private sector — are in districts so dominated by one party that the primary victors are near certain to win the fall general election.

Special elections are often quirky, with low turnout and buffeted by local dynamics, but these two are being watched nationally because they reflect the shifting ground of American politics in the wake of Trump’s defeat and Biden’s victory in 2020.

“These primaries represent the new tensions that we have seen in both political parties,” said John C. Green, director of the Ray C. Bliss Institute of Applied Politics at the University of Akron. “Both the Democratic and Republican coalitions are unstable right now.”

In legislative and political arenas, Democrats are grappling with what kind of party they are becoming under Biden, who during the 2020 campaign cast himself as a transitional party leader who would prepare the way for a post-baby-boom generation of leadership. After a period of relative peace between progressives and moderates earlier this year, the factions have been hurling increasingly pointed barbs over how far the party should move to the left.

While many Democratic leaders in Congress have embraced a bipartisan infrastructure bill, some progressives have objected to what Biden considers a signature achievement because it did not include more for low-income families and gave too much ground to the GOP. Rep. Alexandria Ocasio-Cortez (D-N.Y.) criticized a Democrat leading the group that crafted the compromise for “choosing to exclude members of color from negotiations and calling that a ‘bipartisan accomplishment.’”

The infrastructure agreement also taps into emerging splits within the GOP: Trump is virulently opposed to it because he said Republicans were giving a “big win” to Democrats. But many Senate Republicans — including Minority Leader Mitch McConnell (R-Ky.) — support it.

In Ohio and other GOP primaries this year, Trump is trying to extend his sway over the party by making a slew of endorsements. Some establishment-oriented Republicans worry his picks will not be the strongest candidates for general elections in swing states.

The value of a Trump endorsement came into question last week, when the candidate he backed in a Texas special House election was defeated by another Republican. Turnout was abysmally low, undercutting Trump allies’ arguments that his endorsement is a silver bullet and that his involvement in the 2022 midterm election will drive Republican turnout.

In the Ohio contest, Trump endorsed Carey in June, saying: “He will be a courageous fighter for the people and our economy, is strong on the Border, and tough on Crime.”

The endorsement was a risky bet because Carey is one of 11 Republican candidates in the primary, including state Rep. Jeff LaRe, who was endorsed by Stivers, the previous incumbent, and Bob Peterson, a state senator endorsed by the anti-abortion group, Ohio Right to Life PAC.

In a late push to avoid another embarrassing loss, Trump spoke on a telephone rally for Carey Monday night, and alluded to the high political stakes — for him — in the outcome of this obscure special election: “A lot of people are watching this one. It’s a big deal.”

In Cleveland, the Democratic primary also features a big field of contenders, but Brown and Turner are the clear front-runners in fundraising and endorsements.

Both women are Black, and their competition has underscored a generation gap among Black politicians. Brown was endorsed by the political arm of the Congressional Black Caucus, a group dominated by an older generation of more moderate lawmakers who were key to Biden’s victory in 2020. But there is a growing cadre of younger Black Democrats in the House who are much more progressive. Many of them — including Reps. Ayanna Pressley of Massachusetts, Cori Bush of Missouri and Mondaire Jones of New York — have broken with the caucus group endorsement and backed Turner.

Many prominent Democrats from across the country have taken sides in the costly, increasingly nasty contest, some traveling to Ohio to campaign last weekend.

Cornel West, a political activist and intellectual, also campaigned for Turner, saying: “We can say to some of our brothers and sisters who are part of the corporate wing of the Democratic Party with their milquetoast neoliberalism: We want vision, integrity, we want a focus on the least of these, the poor, the working class, everyday people.”

Clyburn campaigned for Brown, and was joined by House Homeland Security Committee Chair Bennie Thompson of Mississippi, who took a dig at Turner’s reputation as a rabble rouser.

“You don’t need somebody who will go in there and talk about tearing the place up,” said Thompson. “What we need is somebody who will be a good Democrat, work with the Democratic leadership, and support Joe Biden as president.”

Biden has not weighed in on the primary but he has loomed over the race because of Clyburn’s endorsement of Brown. Fudge also has stayed out of the primary, but her mother endorsed Brown.

Brown’s supporters — including a pro-Israel PAC opposed to Turner because she has not supported unconditional aid to Israel — have been spotlighting an infamous 2020 quote from Turner when, in an interview with the Atlantic, she compared the prospect of voting for Biden to “eating a bowl of s—.”

Turner says her critics care too much about her style and not enough about the poor.

“Fighting for justice is messy; it is radical; it is in your face,” she said at a prayer breakfast in Akron Monday. “When you fight for justice you might not always use the prettiest words.’

Turner’s campaign has denounced Brown for accepting campaign contributions from Republicans including Robert Kraft, owner of the New England Patriots and a prominent Trump supporter.

“Shontel Brown: It’s hard to tell whose team she is on,” said a Turner ad.

The Brown campaign responded by portraying her as a unifying leader and strong Biden ally: “Unlike Nina Turner, who has attacked and insulted Democrats like President Biden at every turn, Shontel Brown has built a coalition of Democrats, Independents and yes, even some Republicans, who want to elect someone to Congress who will work with Joe Biden to deliver an economic recovery to Northeast Ohio and stop gun violence.”

One question is whether all the negative campaigning turns people off and depresses turnout.

“People are looking for some stability,” said Jeff Rusnak, a Democratic political consultant in Cleveland who is allied with no candidate in the race. “People are tired and worn out after the last four or five years.”