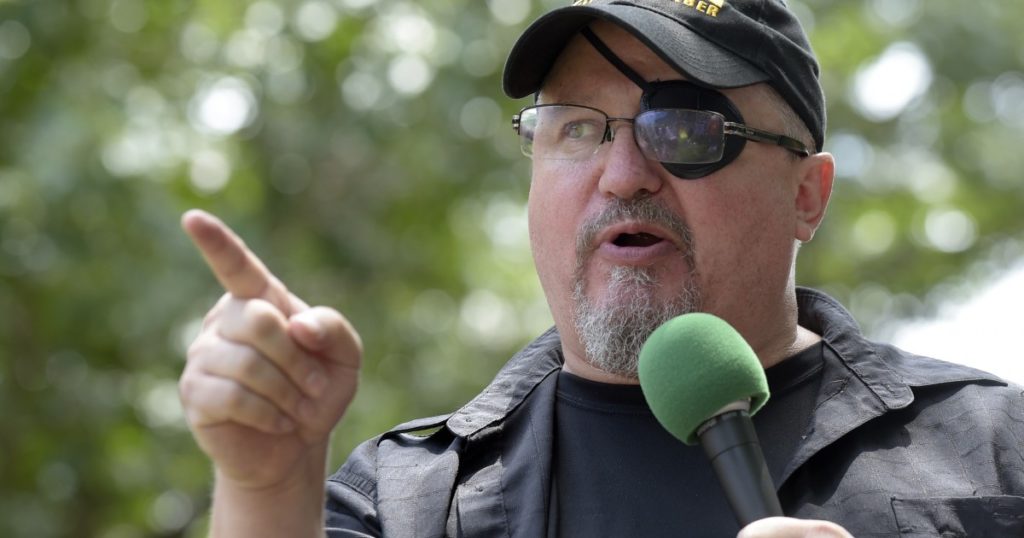 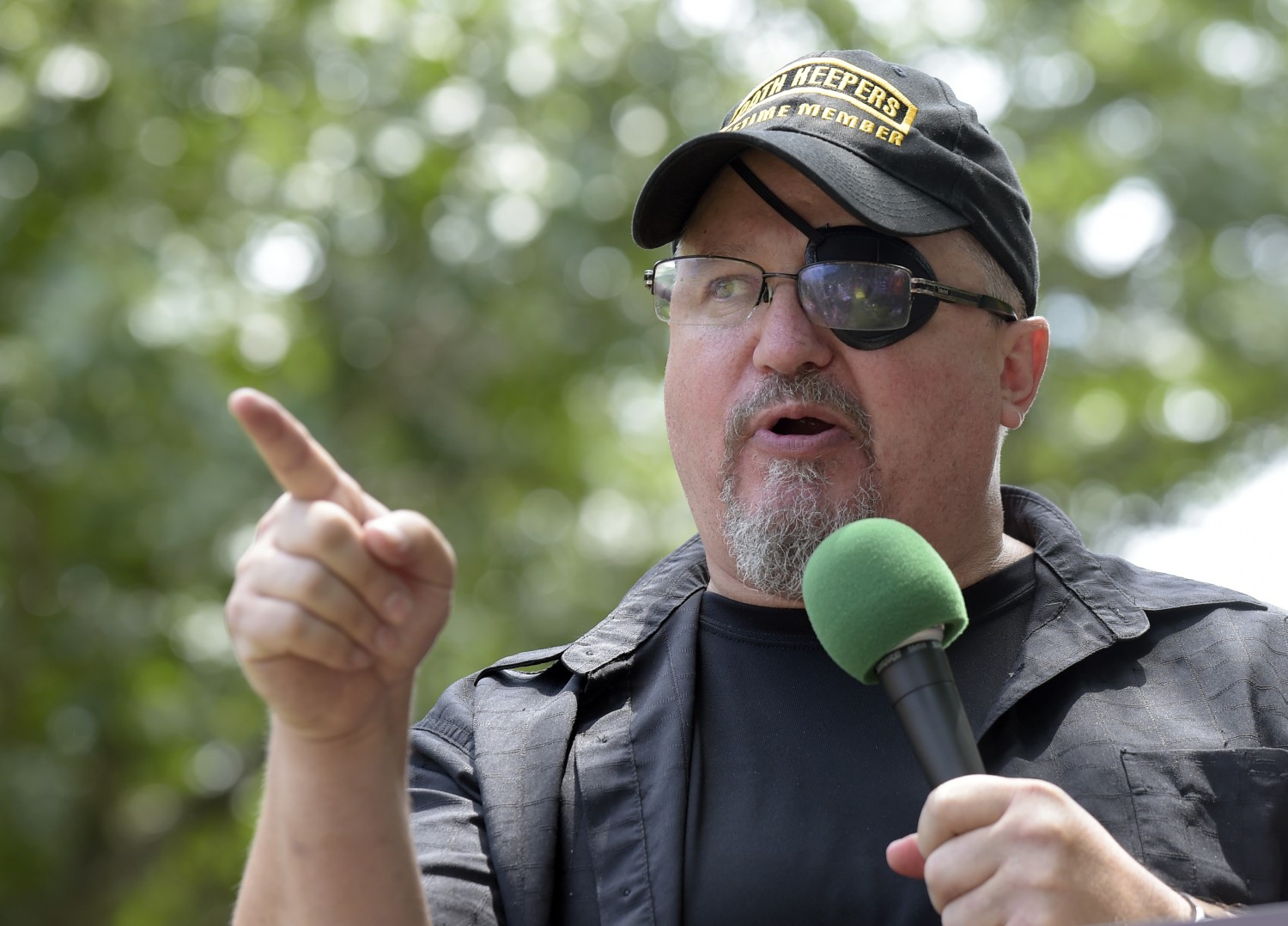 The Justice Department has brought charges against more than 400 people who stormed the Capitol during the Jan. 6 riot, but one of its most pivotal potential cases involves a man who never set foot inside the building.

The probe highlights the Justice Department’s focus on holding accountable leaders of militia and far-right groups whom prosecutors suspect played significant roles in encouraging and plotting the storming of the Capitol Jan. 6. It also underscores the difficulty in bringing cases against individuals who kept physical distance from the melee.

Federal prosecutors are seeking to build a criminal case against Stewart Rhodes, the firebrand founder of the anti-government Oath Keepers, on charges he conspired with members of his far-right organization to block the counting of electoral votes that day, according to federal law enforcement officials and a review of court documents.

“There is always a greater challenge in implicating leaders and people who may be smart enough to keep away from the actual crime scenes,” said James Trusty, a former top Justice Department gang prosecutor.

The Oath Keepers leader has not been indicted, but 12 members of the Oath Keepers have been charged with conspiracy in an indictment that identifies Rhodes as “Person One,” a leader who urged his followers to descend on Washington and communicated extensively with those who stormed the building. All 12 have pleaded not guilty. Separately, one member of the Oath Keepers, who was not alleged to have been part of that conspiracy, on Friday became the first person to plead guilty to participating in the riot.

Rhodes, a 55-year-old Montana resident, could not be reached for comment. He has said he has done nothing wrong, telling the Washington Post in March that “we had no plan to enter the Capitol, zero plan to do that.” Those who went into the Capitol “went totally off mission,” Rhodes told the newspaper.

In a speech late last month in Laredo, Texas, he seemed resigned to being charged in the attack. “I may go to jail soon,” he said.

A Justice Department spokesman declined to comment about Rhodes or the broader investigation into the Oath Keepers.

Federal prosecutors say the vast majority of the more than 400 people charged in the Capitol riot either entered the building or assaulted police officers. Many were caught on video, or identified after they posted incriminating photos and statements on social media. Authorities have arrested at least 20 California residents accused of participating in the riot but not being part of extremists groups. Those charged include Gina Bisignano, a Beverly Hills esthetician and eyelash stylist, and Christian Secor, a UCLA student.

The Justice Department will face a tougher time targeting leaders of militia and extremists groups who did not enter the fray for a host of reasons, former prosecutors said. The Justice Department has not publicly disclosed the leaders whom they may be scrutinizing. Law enforcement officials, speaking on the condition of anonymity to discuss an ongoing inquiry, confirmed earlier news reports that Rhodes is under investigation.

Such probes require time-consuming tactics more commonly associated with taking down drug gangs and the Mafia, and they do not always pan out. Militia and extremist groups have tended to use encrypted applications to communicate, making it difficult for authorities to get a full picture into their plans. The alleged plotting took place over just a few weeks. In going after organized criminal groups, on the other hand, prosecutors frequently have years worth of crimes to target.

Legal experts said those hurdles will force authorities to rely extensively on cooperation from lower-level members of extremist groups in building cases against leaders. Such cooperation is no sure thing. The former prosecutors noted that Oath Keepers, for example, hold fervent anti-government beliefs and, so far, don’t face the kinds of lengthy prison sentences that frequently convince drug offenders to provide information in exchange for leniency.

But prosecutors may have taken a step in that direction Friday when heavy metal guitarist Jon Schaffer, reportedly a founding member of the Oath Keepers, pleaded guilty Friday to two felony charges that he participated in the riot and agreed to cooperate with prosecutors in exchange for a lighter sentence. The 53-year-old was not charged in the 12-person Oath Keepers conspiracy indictment, and it’s not clear what information the Indiana resident might provide about Rhodes or others in the organization.

“The government typically develops cases against lower-level people in the hopes of obtaining their cooperation to target those at higher levels with greater decision-making authority,” said Gregg Bernstein, a former federal prosecutor. “It works its way up. That looks like what is going on here.”

Rhodes founded the Oath Keepers in 2009 to purportedly protect the rights of U.S. citizens from shadowy elites. A darling of extremist and militia groups and known for wearing a black patch over an eye he lost in a gun accident, the 55-year-old Montana resident focused his recruitment efforts on current and former military and law enforcement personnel. He maintained that such highly trained people would be best positioned to thwart government leaders from imposing tyranny. In more recent years the Oath Keepers pivoted to supporting then-President Trump against what they feared was a “Deep State” coup.

By November, Rhodes had become an ardent backer of the former president’s falsehood-filled campaign to overturn an election he lost. On Jan. 4, prosecutors say, Rhodes posted an article on the group’s website urging “patriots” to descend on Washington to “stand tall in support of President Trump’s fight to defeat the enemies foreign and domestic who are attempting a coup.”

In indictments and court filings, federal prosecutors detailed Rhodes’ role in encouraging and organizing Oath Keepers’ activities in Washington and his communications with his members before, during and after the siege, which left five people dead and scores of others injured. Rhodes watched the confrontation safely from the Capitol grounds.

In accusing the 12 Oath Keepers of conspiring on Jan. 6, prosecutors alleged in court papers that Rhodes and Oath Keepers engaged in a long-running group discussion on an encrypted app, Signal, in which they “were activating plans to use force on January 6.”

“Prior to the operation,” prosecutors wrote, Rhodes and the other Oath Keepers “discussed topics such as what kind of weapons to bring, using handheld radios to communicate during the January 6 operation and, according to Person One, the existence of ‘several well equipped QRFs outside DC’ ” and “many, many others, from other groups, who will be watching and waiting on the outside in case of worst case scenarios.”

Prosecutors said a QRF was what the group called a “Quick Reaction Force” of heavily armed men and women stationed in jurisdictions that did not have Washington’s strict gun laws.

Rhodes came to Washington on Jan. 5 and helped oversee security Oath Keepers provided for various Trump associates at the next day’s Stop the Steal rally and associated events, according to associates and court filings. Among those who received Oath Keepers security: Roger Stone, a close friend of Trump and Republican political operative.

After Trump’s rally on the Ellipse — in which the former president urged his followers to “fight like hell” for him — Rhodes and other Oath Keepers headed to the Capitol. Throughout the morning and afternoon, Rhodes touched base with Oath Keepers by phone and over the group signal chat, prosecutors alleged in court filings.

In the most recent indictment, prosecutors alleged Rhodes and members of the Oath Keepers called each other a half-dozen times in the hours and minutes before the Capitol was stormed. Prosecutors cited as “critically” important a 97-second call between Rhodes and a Florida leader of the Oath Keepers just before that man and seven others formed a “stack” formation and pushed through police and into the building.

As the siege played out, prosecutors alleged Rhodes praised those trying to get inside the building. “Patriots are taking it into their own hands,” he wrote in a group chat, according to prosecutors. “They’ve had enough.”

He also posted a photograph of the Capitol, saying it showed “patriots pounding on doors,” prosecutors wrote in court papers. The New York Times and the Washington Post have reported previously that Rhodes is under Justice Department investigation.

Steven Levin, a former prosecutor, said authorities can’t rely on innuendo if they want to charge Rhodes. They will need someone who can explain what was said during the phone calls.

“The 97-second phone conversation is evidence, but you need someone to fill in the substance of the conversation,” Levin said. “You can’t just assume that the leader said go storm the Capitol … Building cases against such leaders will be difficult for that reason. They are far harder to make than going after those caught on video.”