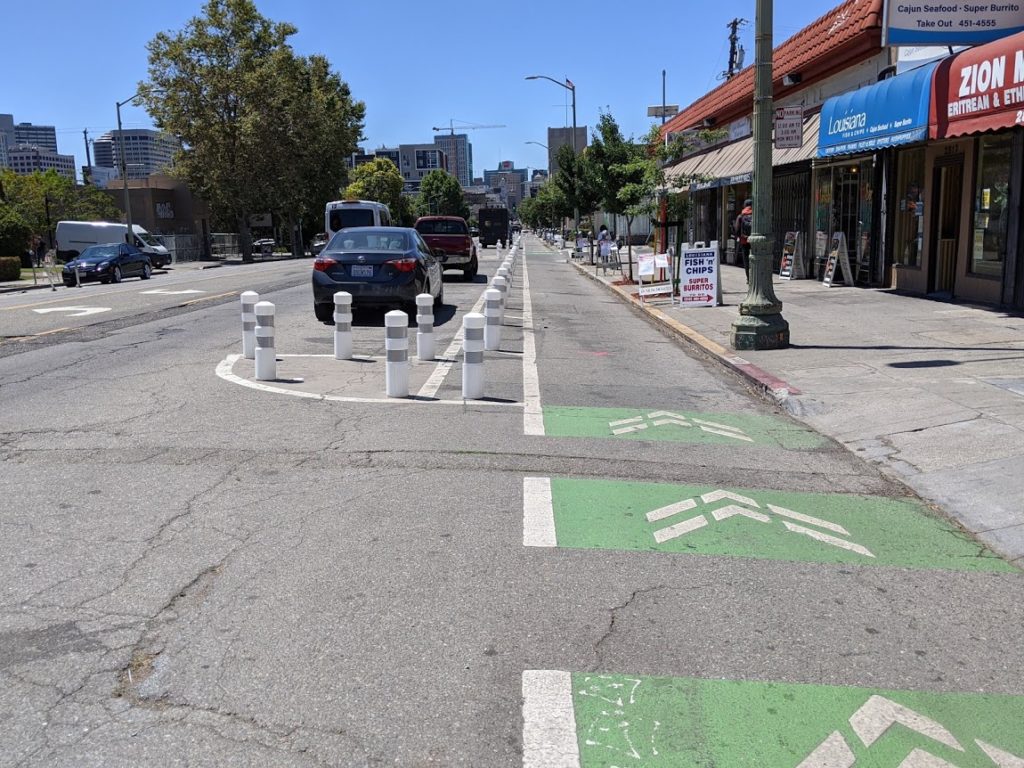 In an abrupt change of course, Oakland DOT’s director Ryan Russo is calling for the removal of protected bike lanes on Telegraph from 20th Street to 29th Street in the KONO section of Oakland. From a statement published Wednesday:

In the case of protected bike lanes — we still recognize their tremendous value, AND we recognize that value doesn’t fit to every circumstance. In the case of Telegraph Avenue between 20th Street and 29th Street, staggered intersecting streets produce an unusual number of uncontrolled (no stop sign or traffic signal) T-intersections where on other streets there would be a smaller number of four-way intersections. Each intersection is a potential conflict point between people walking, biking, and driving. A cyclist at each intersection has to be concerned at the same time with vehicles coming from behind turning right, vehicles coming from the front turning left and vehicles coming out from the side street. Short of signalizing every offset T-intersection, closing side streets and restricting many vehicle movements — protected bike lanes may not be the best way to keep all Oaklanders safe and comfortable at these intersections. Even if all of those changes were pursued, there are too many intersections and driveways over too short a span with too many people traveling in various modes for the lanes to function as intended — which are as all ages and abilities bikeways.

Instead, Russo is now calling for buffered bike lanes, which he says can work as well as protected lanes in this particular case. “It’s not clear cut one way or another,” he told Streetsblog.

A 2017 before-after study by Oakland’s Department of Transportation showed a 40 percent reduction in crashes after the installation of protected bike lanes. But Russo says much of that can be attributed to the lane reductions, which would remain in either scenario. Telegraph previously had seven lanes, including two lanes of traffic, a turning lane, and two parking lanes–it now has two traffic lanes and two parking lanes.

Nevertheless, advocates reacted with ire to the notion of abandoning protected bike lanes on Telegraph. One of the reasons: for buffered bike lanes to work at all they obviously have to be clear of scofflaw motorists. That’s a notion Bike East Bay’s Robert Prinz finds absurd (note the police car parked in the bike lane in the photo):

I’ll start. How bout these #InnovativeCurbManagementStrategies @OakDOT? An OPD officer working overtime as private security for Target left their car in the bike lane, at a bus stop and next to a fire hydrant. Impressive. pic.twitter.com/vVyBgUMRBO

Streetsblog could add many more pictures of motorists blocking bike lanes and driving in them. This issue was underscored in San Francisco by last month’s fatal crash on Polk. In that tragedy, a motorist cut through a section of unprotected bike lane to go around a line of cars and run a red light. One pedestrian was killed and another was severely injured.

And protecting pedestrians, said Bike East Bay’s Dave Campbell, is perhaps the biggest argument for protected bike lanes. “Before the project, four out of five cars did not stop for pedestrians at crosswalks, now two out of three do—that’s a huge improvement,” he told Streetsblog. He agreed that motorists will invariably cut through the bike lane to pass, endangering cyclists and pedestrians. “Buffered bike lanes are used by motorists for many reasons, some legal, many not.”

Meanwhile, Prinz points out the city has already won a $4.5 million grant from the state to build protected bike lanes, in concrete, dating back to 2015. But as previously reported, the Community Benefits District, which represents merchants in the area, objected to the loss of parking caused by protected bike lanes, leading to seemingly endless political battles and push-back. “This project has already been bid out to a contractor & could have been wrapping up construction now if not for the BID’s objections,” wrote Prinz on social media. As one Oakland staffer who asked not to be identified told Streetsblog, the current, temporary incarnations of the project, using plastic bollards and paint, and plastic bus boarding islands, look ugly and are confusing–but they were never meant to be in the ground for years. Leaving the project unfinished for so long has helped sow opposition. “OakDOT never did a good enough job with the quick build implementation, it was clear it wasn’t working well for years,” said a planner close to the project who also asked not to be identified.

Ironically, some of that permanent work has just started, in the form of concrete bus boarding islands with integrated protected bike lanes–albeit these particular installations are funded by adjacent developments:

Ultimately, it’s up to the city council to decide on the fate of the bike lanes on Telegraph. Because Russo is now recommending a buffered lane, there’s a strong chance the city council will go that way–pivoting on the vote of Councilmember Carroll Fife, who represents the district. Fife is a supporter of protected bike lanes on Telegraph–or at least she was, according to a staffer who texted Streetsblog during her campaign for office last year. Now, however, “Councilmember Fife has no comment except that she looks forward to learning more about the Department of Transportation’s proposal when it is brought to City Council for deliberation,” wrote her Chief of Staff, Tonya Love, in an email to Streetsblog.

Another voice that could be pivotal in deciding the ultimate fate of Telegraph’s configuration is the Oakland Bicycle and Pedestrian Advisory Council (BPAC). Its chair, Andy Campbell, told Streetsblog they will discuss the matter at their next meeting on June 17 at 6 p.m. However, he said the issue has come up before; in the past the majority strongly supported protected bike lanes on Telegraph. “I like the protected bike lane. I have kids and I like biking on it with them,” he told Streetsblog, added that the existing configuration needs improvement.

Bike East Bay, meanwhile, asks people to sign up for campaign updates on the push to get the best possible bike and pedestrian safety features on Telegraph.