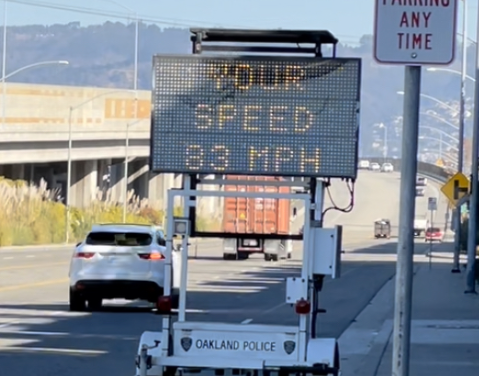 OakDOT is evaluating whether to designate Frontage Road, which hugs a section of the eastern side of I-880 in West Oakland, into a truck-prohibited route as part of the West Oakland Truck Management Plan. OakDOT should not only prohibit trucks but should redesign Frontage as a safe, multi-modal street more in tune with the residential neighborhood it now traverses.

Frontage Road, between West Grand Ave and 7th Street, is a five-lane street designed with a 35-mph speed limit. However, because it’s so wide, that speed limit is rarely observed. And it’s frequented by trucks that add even more pollution to a residential community saddled with emissions from freeways, the Port of Oakland, and nearby railroads.

The area around Frontage Road has changed from industrial to residential. In fact, after the City Council changed zoning laws in 2014 as part of the West Oakland Specific Plan, the area became the most densely populated residential area in West Oakland. OakDOT should treat Frontage Road in line with this newer, residential character.

Its current design, however, reflects its industrial past. A traffic study conducted in 2018 showed the amount of traffic for the street was minimal relative to the capacity. That same study also showed the 85th percentile speed for cars on the street was 58 MPH, and cars routinely speed upwards of 90 MPH. Not surprisingly, there have been several fatal crashes on this street in the past year alone.

The West Oakland community already suffers from a history of red-lining and neglect, including getting halved in two by the Cypress Freeway. The freeway was rerouted after the 1989 Loma Prieta earthquake, but the area still faces much higher pollution levels than other communities in Oakland.

Meanwhile, nearby Maritime Street is an officially designated truck route, surrounded by industrial use, and seems to have plenty of capacity. It is also five lanes but on the opposite side of the freeway and far from residents. Maritime seems a much better option for trucks. It should be on the Port and the trucking community to prove why Maritime Street doesn’t provide sufficient capacity.

As part of its West Oakland Truck Management Plan, the city has hired engineers to reassess Frontage Road. The results will hopefully confirm that Frontage is not necessary to Port operations and trucking. The city can then consider whether to ban trucks. Either way, it should give Frontage Road a diet and make it into a safe, multi-modal street with dedicated, protected bike lanes–prioritizing a level of safety appropriate to the now-residential neighborhood it serves.