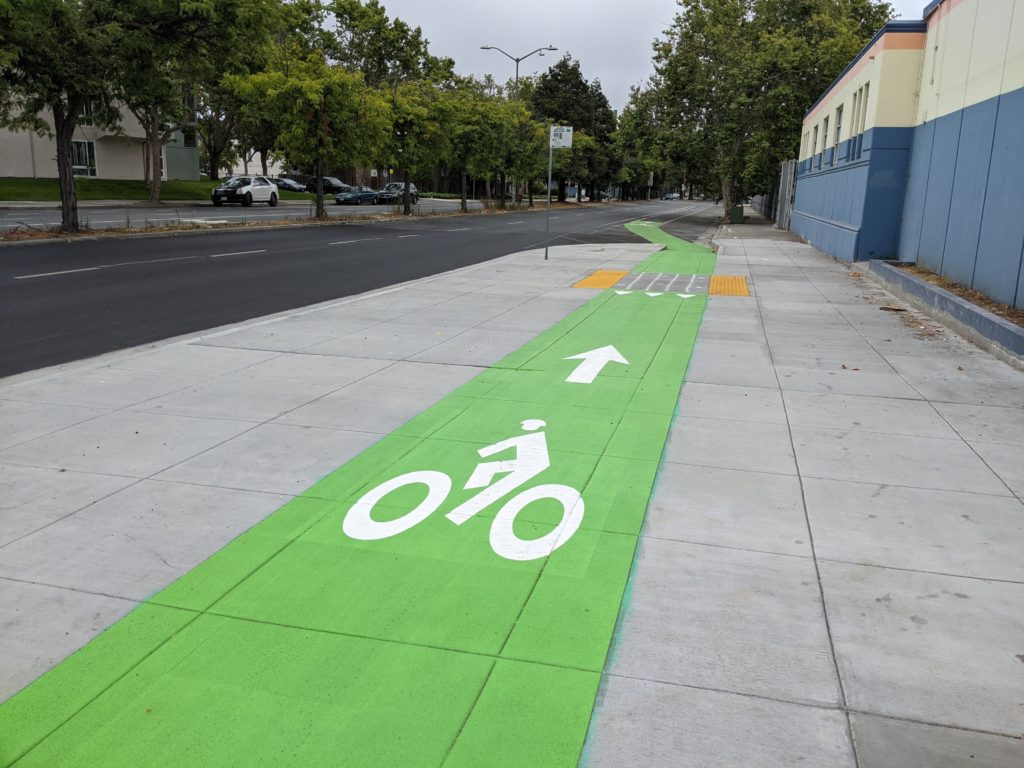 Oakland’s Department of Transportation is midway through a series of intersection and crosswalk improvements, funded by a federal grant, on Market Street and San Pablo between 4th Street and 34th.

Below are maps of the project locations. A few seem mostly finished, such as the bus boarding island in the lead photo. Others are just getting started.

Two years ago, some of these locations were given temporary measures, and local residents were invited to paint the street with murals under Oakland’s “Paint the Town” project. When Streetsblog last reported on San Pablo two years ago this is what it looked like at 34th:

And this is what it looks like now, with a concrete island to make sure cars slow as they make the turn off San Pablo:

Understandably, some people miss the prettified interim project, but concrete safety measures have to take precedent. This tweet from Bike East Bay’s Robert Prinz in 2019–and the reply to it from advocate Jeff Poskanzer–illustrates the sentiment perfectly.

I just noticed that the Beefy Bollard Bois at San Pablo and 34th were retired in favor of Colossal Concrete Curbs. That’s good, I guess, but I’ll miss the music-themed street art. pic.twitter.com/yABmxRPKyK

Certainly, the current incarnation isn’t as pretty–but it is safer. That was underscored at the intersection at San Pablo and Market, where a motorist, without signaling, suddenly jinked right onto Market at a speed that must have been close to 60 mph, just as I was about to step into the crosswalk. That notorious intersection isn’t part of the project, underscoring just how much work remains to be done to make Oakland’s streets truly safe.

The bad news for cyclists, of course, is protected bike lanes were not part of this project. Fortunately, Streetsblog is confident OakDOT is just waiting to implement their citywide advanced “curb management” plan to keep motorists from double parking (that’s sarcasm of course).

But at least the city seems to have adopted a policy of doing bus boarding islands right, as seen in the lead image and below.

“The funding that is paying for all this work is from a Federal Highway Safety Improvement Program grant, awarded in part due to a history of crashes and fatalities along the corridor. This includes two people who were killed in separate incidents while biking on northbound Market at 5th, in each case hit by a turning semi-truck driver,” explained Bike East Bay’s Robert Prinz. The grant is administered by Caltrans. “…OakDOT staff said that changing it to a protected lane, or even just adding painted bike lane buffers, would require a whole new Caltrans encroachment permit process and slow down the entire project significantly. This isn’t a bluff, as Caltrans recently vetoed OakDOT’s request to simply narrow the travel lanes on West Street at 580, in order to widen the painted bike lanes a bit.”

It’s an unfortunate situation that advocates are fighting on the state and federal levels.

“Plenty of other projects in Oakland and elsewhere around the East Bay have been watered down or delayed via this Caltrans permit process, or in some cases, city staff will proactively avoid changes in areas that require Caltrans approval, even if it means worse bike/wall facilities,” Prinz concluded.

The good news is if and when that battle is finally won, the bus boarding islands won’t need torn out and redone to add protected bike lanes, thanks to some forward-thinking transportation planners attempting to jigger the bureaucracy as best they can.