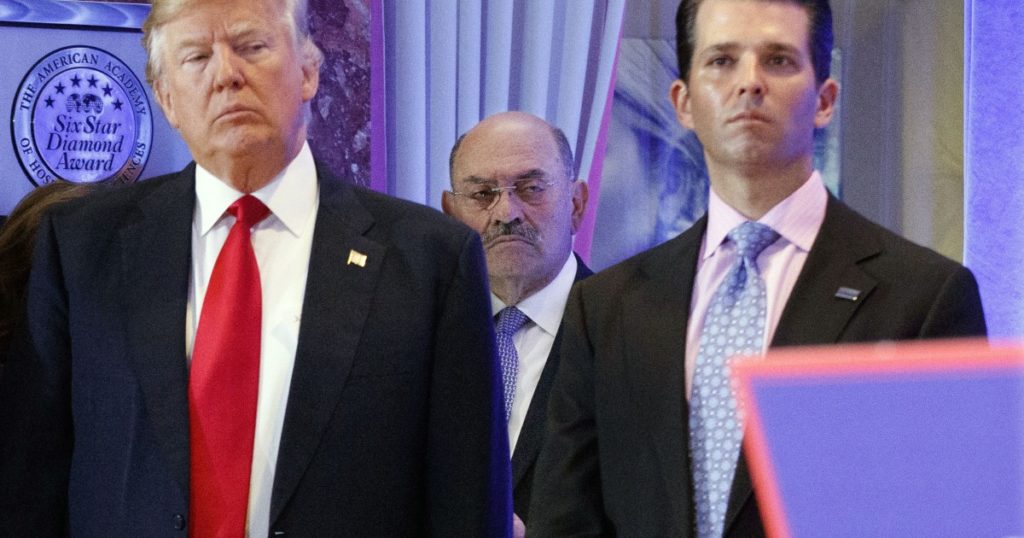 When Donald Trump met in Central Park with contestants from the second season of “The Apprentice,” there was someone new standing to his left, the sun gleaming off his bald head and eyes squinting behind rimless glasses.

This, Trump said, was Allen Weisselberg, his chief financial officer, and he was filling in for George Ross, another executive who had appeared on the show.

“If you think George is tough, wait until you see Allen,” Trump boasted, as Weisselberg stood silently holding a leather briefcase.

Nearly two decades later, Trump’s fate might depend on how quiet Weisselberg remains after spending most of his adult life as the former president’s tight-lipped, behind-the-scenes accountant.

New York state and local prosecutors are digging through Weisselberg’s finances as they build a potential case against his boss. The full contours of the investigation into the Trump Organization remain difficult to discern, however it appears they’re focusing on various fraud-related allegations that have swirled around Trump for years.

Although Trump is accustomed to being under scrutiny, he’s no longer cloaked in the protection of the presidency, making the current probe one of the gravest legal threats he’s faced at a time when he’s trying to salvage his political and financial futures.

Despite being ousted from the White House in the last election and silenced across much of social media, Trump maintains his grip on the Republican Party and plans to kick off another round of rallies Saturday in Ohio. At the same time, his business is under increasing pressure with hundreds of millions of dollars in loans due in the coming years, threatening the veneer of unbridled success he’s labored to protect.

Weisselberg, 73, has not been charged, and his lawyer declined to comment for this story. After years of devoted service, at a time when he might otherwise be coasting into retirement, he finds himself in a similar position to others who chose to work for Trump — squeezed by prosecutors who want to turn an insider into a cooperator.

It’s a fate that befell Michael Flynn, Paul Manafort and Michael Cohen, who pleaded guilty or were convicted amid investigations during Trump’s presidency. But long before any of them entered Trump’s orbit, there was Weisselberg, who began working for the family business nearly five decades ago.

“If anybody has anything on Donald Trump, it’s Allen Weisselberg,” said Michael D’Antonio, a Pulitzer Prize-winning reporter and author of the book “The Truth About Trump.”

Weisselberg grew up in Brooklyn and graduated from Thomas Jefferson High School in 1965. In his yearbook, he said his goal was to be an accountant.

He received an accounting degree from Pace College in New York in 1970, and then three years later Trump’s father, Fred, hired him.

The company, which built and rented apartments around New York, had been under scrutiny from state and federal authorities long before Weisselberg went to work for the Trumps.

The U.S. Senate Banking Committee and the New York State Investigation Commission had investigated whether Fred was improperly profiting from public housing programs. Neither inquiry resulted in any charges, but they damaged Fred’s reputation.

Then, in 1973, the Justice Department filed a lawsuit claiming the Trump business was discriminating against potential Black tenants. Donald Trump, who had recently become company president as his father stepped into a chairman role, bitterly fought the case before entering into a consent agreement.

The cascade of investigations was a sign that the company “was already on the dark side” when Weisselberg started working there, D’Antonio said, suggesting a willingness to stretch the rules may have been a job expectation.

Over the years, the Trump Organization shifted its focus from middle class apartment buildings in New York’s outer boroughs to skyscrapers in Manhattan, casinos in Atlantic City, N.J., and other business deals. But even though Trump craved a reputation as a big-time entrepreneur, the company remained privately held and tightly knit, with Weisselberg serving as his indispensable numbers man. When Trump was elected president, he left his company in the hands of his two oldest sons, Donald Jr. and Eric — and Weisselberg.

“My sense was, this was his professional identity, and probably his total identity,” said Gwenda Blair, another Trump biographer who met Weisselberg while she was researching her book, “The Trumps: Three Generations of Builders and a President.”

Weisselberg’s family became intertwined as well. One of his sons, Jack, is an executive at Ladder Capital, which has loaned money to the Trump Organization. His other son, Barry, worked directly for Trump by managing the company’s ice skating rink in Central Park.

Barbara Res, a former Trump Organization executive, said Weisselberg could be meek in Trump’s presence, entering his office “hat in hand” when he needed to speak with him.

Res suggested that Trump’s seeming generosity toward Weisselberg and his family was a way to exert control over him.

“Trump doesn’t do things for nothing, ever,” Res said. “He always has to have something over somebody.”

Weisselberg’s name surfaced during investigations into Trump during his presidency. In 2018, Trump agreed to shut down his charity after the New York state attorney general’s office uncovered what it called “a shocking pattern of illegality,” including improper coordination with his 2016 campaign.

Weisselberg had corresponded with Corey Lewandowski, Trump’s campaign manager, about timing supposedly charitable donations for key moments during the Republican primary, according to emails obtained by state investigators. Also, in a sign of the blurred lines that have often characterized Trump’s business, Weisselberg said during a deposition that he wasn’t even aware that he was listed as a member of the charity’s board.

Weisselberg was also involved in the investigation into Trump’s hush money payments to women who said they had sex with him, a scheme that was intended to keep the women quiet during the 2016 presidential race.

Cohen, Trump’s personal lawyer at the time, pleaded guilty to violating campaign finance laws with the payments because they were intended to support Trump’s candidacy, and Weisselberg reportedly received immunity to testify before a federal grand jury.

“Allen Weisselberg made the decision that it should be paid over the 12 months so that it would look like a retainer,” Cohen testified to the House Oversight Committee on Feb. 27, 2019.

Weisselberg, who has not publicly commented on Cohen’s allegations, was often tasked with playing with numbers, according to Cohen. He testified that Trump directed Weisselberg to convince Forbes business magazine to make his boss’ net worth look bigger than it was.

Inflated figures were also provided to insurance companies to lower the company’s premium payments, and to Deutsche Bank as Trump was looking to finance a potential purchase of the Buffalo Bills football team, Cohen said.

Trump spent nearly his entire presidency under investigation by special counsel Robert S. Mueller III, the U.S. attorney’s office in Manhattan or by congressional Democrats, who impeached him twice.

Now the Manhattan district attorney and the New York state attorney general are working together on the current case, which hinges on whether Trump inflated the value of his properties to obtain bank loans or deflated it to lower his tax bills. Court papers show investigators have examined the Trump Seven Springs estate in Westchester County, N.Y., the 40 Wall Street office building in Manhattan, the Trump International Hotel and Tower in Chicago, and the Trump National Golf Club in Los Angeles.

Trump has called this latest case a “continuation of the greatest Witch Hunt in American History.” A lawyer for the Trump Organization did not respond to a request for comment about the investigation.

“It can be hard to sort through all those documents and figure out what is going on,” said Randall Eliason, a former federal public corruption prosecutor. “It’s not surprising at all they would be targeting someone in his position because he is going to know the inside details.”

But getting people to cooperate is not easy, especially when they work at smaller organizations where they might feel a strong sense of loyalty to the people who hired and groomed them.

With Weisselberg, it could be especially difficult. Federal prosecutors frequently hold the possibility of lengthy prison sentences over witnesses to garner their assistance. New York state prosecutors don’t have as much of that leverage because sentences are not nearly as severe.

“Depending on what they have against Weisselberg, there may not be an enormous incentive to cooperate in any event,” said Daniel R. Alonso, a former top Manhattan prosecutor and a former assistant U.S. attorney.

So far, it appears prosecutors are looking at Weisselberg and possible tax issues related to unreported compensation. His son Barry’s ex-wife, Jennifer, has been providing prosecutors with financial records about lucrative company benefits like private school tuition payments and rent-free apartments, according to a source with knowledge of the investigation who declined to be identified because the case is ongoing.

Duncan Levin, Jennifer Weisselberg’s lawyer, said “she is fully committed to answering their questions and providing them with any documents that may be relevant to their investigations.”

Trump’s critics are hopeful that this investigation will finally result in criminal charges for him, but former prosecutors said it’s not that simple even if the evidence adds up to wrongdoing.

Chief executives can argue they were acting on advice of subordinates or experts, such as lawyers or accountants, or the crimes were perpetrated by lower-level officers.

In Trump’s case, prosecutors face an additional hurdle — the former president avoids using email, evidence investigators frequently use to link suspects to illegal schemes. That will force prosecutors to rely extensively on potential witnesses, like Weisselberg, whose credibility can be impugned by defense lawyers.

“They have motivations to lie, to protect themselves,” Zeidenberg said. “Someone like Weisselberg may give riveting testimony. But paper makes it easier.”

Blair, the biographer, said if anyone knows whether financial figures were being manipulated, it’s Weisselberg.

“Somebody knew the real numbers and how they were moved around,” she said. “And that was him.”