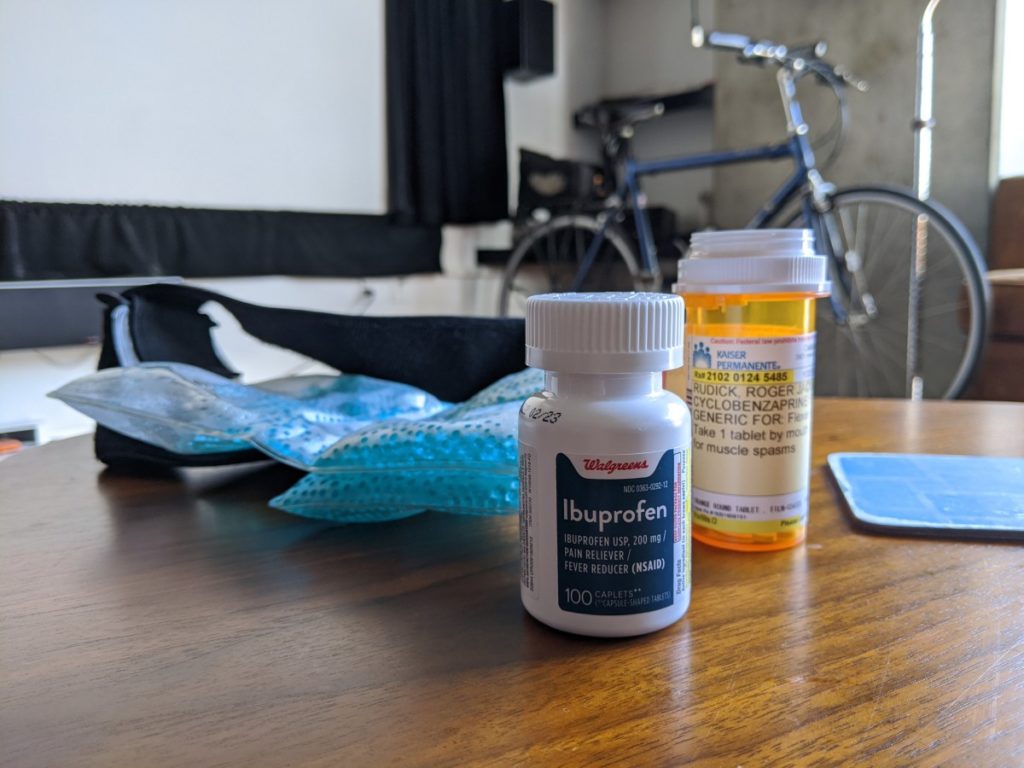 Last Monday evening, just as I was getting ready to start my extended Thanksgiving Holiday, I crashed my bike.

I was biking with my partner Susie to a shop in Grand Lake to pick up some cardamom and chocolates for our Thanksgiving dinner. To get there, we had to brave Oakland’s infamous Caltrans-controlled freeway under crossings–in this case on Jackson Street under I-880.

Once we got past the freeway, we had a relatively pleasant trip on some of Oakland’s newly reconstructed streets, including the two-way protected bike lanes alongside Lake Merritt. For the trip back, I suggested we take the long way home to Jack London Square via the estuary channel path. As previously reported, it’s a squirrelly ride, but it’s the only car-free option to get under I-880. Traffic was getting heavy. The sun was setting and pumping glare into motorists’ eyes. I didn’t want to risk getting run over by someone racing down a freeway ramp during our trip back underneath 880.

We made our way along the opposite side of the lake and reached the start of the estuary path under Lake Merritt Boulevard. Despite the usual muck, broken glass, trash, and craggy pavement, we enjoyed the pretty views of the channel and its waterfowl. When we got to the portion behind Laney College, underneath the freeway itself, I decided it best that we avoid the “Death Star” trench, the curving red part of the path seen in the map below where it goes around an always-empty parking lot.

That red portion is always full of broken glass and other debris. Over the years, I’ve blown a tire trying to ride it and once nearly rode over an upturned steel rake. Thanks to the fences on either side and terrible sightlines (as seen below) it’s also a perfect place to get mugged.

Like most cyclists, I’ve learned my lesson, and use the route marked in green on the map above, cutting across that empty parking lot. In the past year or so, however, someone added yet another fence (see image below) cutting off the parking lot, apparently in an effort to force cyclists to stay on the dangerous path. Fortunately, there are always openings in the newer section of the fence, presumably cut by scofflaw bike commuters.

I’ve ridden through those openings plenty of times. But this time I glanced back to make sure Susie was still with me, caught the glare of the sun, and didn’t notice there was a wire stretched across the gap.

It caught my helmet at forehead level, yanking me back. My front wheel lurched up and I was dumped off the back of the bike and pile-driven into the asphalt, bull’s-eye on a spot on my lower back where I’m already prone to excruciating spasms.

I “landed well” and didn’t break any bones. But I spent my Thanksgiving wincing and rolling in pain, lying on ice packs, taking pain meds, and trying to sleep.

I’ve put out requests to both Caltrans and Laney College to figure out exactly who built these fences and why. Oakland DOT’s spokesperson confirmed that Caltrans was responsible for building and designing this section of the bike path as a condition of its “seismic retrofit project to I-880 over the Lake Merritt Channel.” Of course–how often does Caltrans build something for vulnerable road users that isn’t a side requirement of some massive car project? Presumably, the fences and other barriers (see the stone treatment between the path and parking lot two photos up) were also part of the Caltrans design. Laney College is supposed to handle maintenance.

Either way, it’s remarkable that even on a bike path that doesn’t interact with the highway, in the only place one can cycle under the freeway without taking a very real risk of getting run over, the State’s transportation agency still managed to make something dangerous.

Update 12/1: A Caltrans spokesperson confirmed they designed the facility and installed fencing and that Laney College is responsible for maintenance.