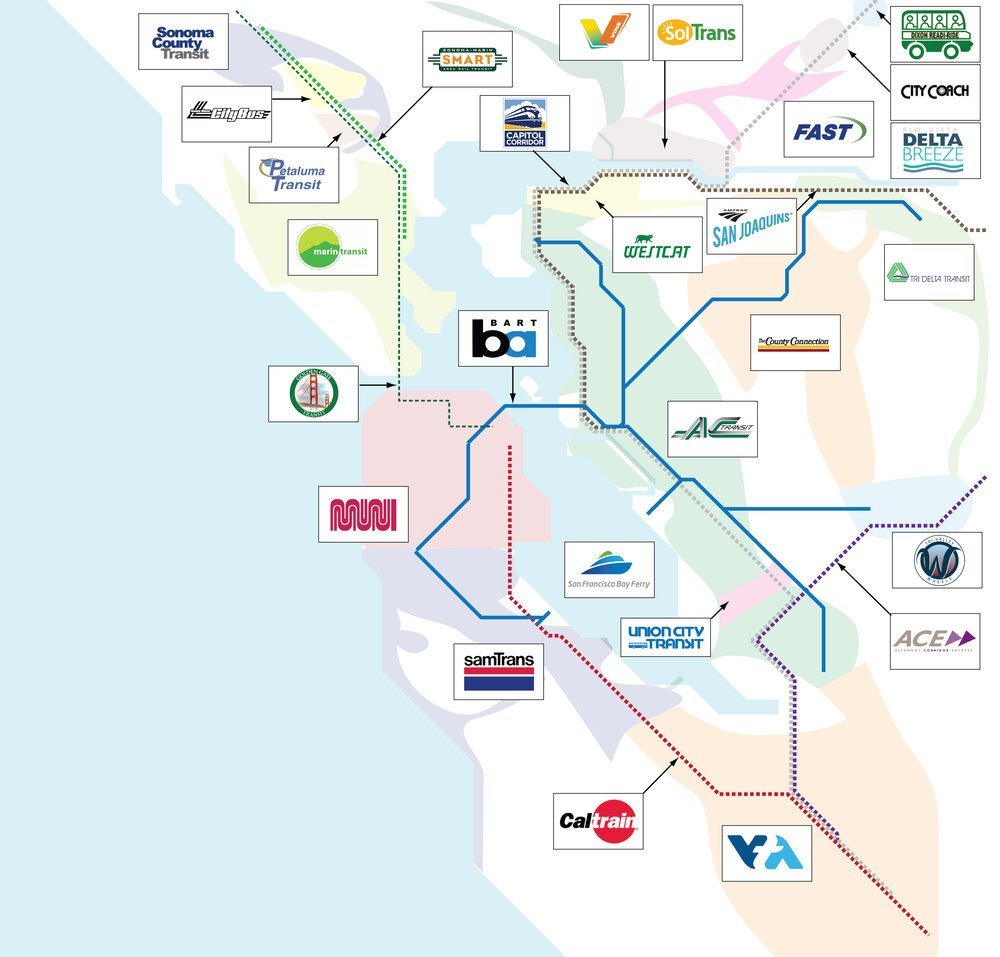 “The region’s lack of fare integration, schedule integration, and connectivity is an unnecessary hardship on transit riders. It wastes our money and our time. Well-run metropolitan transit systems all integrate fares and schedules, whether they have one operator or many,” wrote Livable City’s Tom Radulovich, in an email to Streetsblog.

Fortunately, some progress is being made. The Fare Integration Task Force of the Metropolitan Transit Commission (MTC) met Monday afternoon to hear a broad description of different options for moving the Bay Area’s 27 transit systems towards a more rational fare policy. One scheme would involve “trade agreements,” where bilateral cooperation is launched by agencies that riders use in conjunction frequently, such as BART and Muni. That might involve free transfers between the two agencies. Another was labeled a “big tent” alliance, in which one central body determines fares and riders can use anything from the SMART train to AC Transit, Caltrain, Muni, or whatever, with the same fare structure, based on distance or other criteria, all on a single ticket.

For riders and advocates, the big tent is the ideal scenario, explained Seamless Bay Area’s Ian Griffiths, although he added that all options need study. Unfortunately, the usual parochial pushback against fare integration was on display before the meeting even started via an Examiner article Sunday featuring SFMTA director Jeffrey Tumlin:

Different agencies each serve different populations with varying needs, and those circumstances influence how they prioritize resources. Take SFMTA, where Tumlin says they “take equity more seriously than in other parts of the region,” as evidenced by deep discount programs available to much larger portions of the population. Fare integration risks putting “equality over equity,” and, in its effort to make everything uniform, doesn’t necessarily “mean we bring everyone up to the highest quality.”

“Invoking equity to excuse our operators’ endless stonewalling on fare and schedule integration is dishonest and disappointing,” replied Radulovich, who also served 20 years as a BART board director.

As to “highest quality”–this is coming from the head of an agency that has such acute maintenance and management problems that it was forced to abandon San Francisco’s rail system in its entirety (and those problems predate COVID).

Tumlin added to the Examiner article in a series of tweets, in which he said advocates have “… good intentions, but their lack of transit operations and finance understanding means their solutions would harm not help transit.”

For which he was ripped a new transit tunnel:

Unless these key GMs know how Verkehrsverbünde work over here, they don’t understand transit finance either.

In his tweet, Levy, a Paris-based expert in global transit (who writes for Streetsblog and many other publications) is referring to “transport associations”–umbrella organizations that collect fares for transit operators in Germany (and elsewhere) using the “big tent” approach. The result has been higher ridership, more efficiency, and more revenue for all the transit operators. And, yes, higher levels of equity (aka fairness) for the traveling public. In fact, fairness is the driving force behind the principle advocacy group for fare integration, Seamless Bay Area.

Griffiths said he and other advocates have met with all the Bay Area’s transit agency’s leaders. He added that they’ve also met with community leaders and experts from around the world. But, he put diplomatically, “…the path to change may be different from what GMs want.” Advocates fully appreciate that integration will cost money in the short term, he told Streetsblog, and that it’s his job to work with legislators to get that money.

“Tumlin is smart and capable,” said Radulovich. “He ought to use his intellect and authority to create an equitable and rider-focused integration proposal, rally his fellow operators behind it, and tell MTC and the state electeds what they can do to help the operators implement it.”

The Fare Integration Task Force, meanwhile, will continue its work and meets again in February.