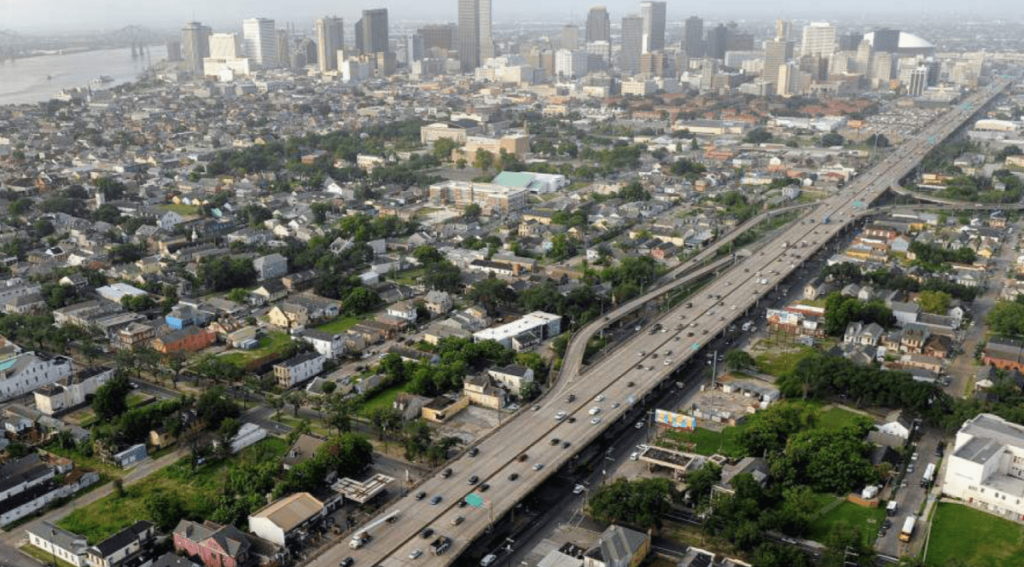 President-elect Biden’s pathbreaking pick for Transportation Secretary says he’ll reverse decades of discriminatory planning by expanding public transit and, most important, dismantling urban freeways that were built to destroy Black communities and led to decades of health and wealth inequity.

US DOT nominee Pete Buttigieg said the Biden administration has an opportunity to change past federal policies that encouraged highway development through poorer neighborhoods with little regard for the lives of the people who lived there.

“It’s disproportionately Black and brown neighborhoods that were divided by highway projects plowing through them because they didn’t have the political capital to resist,” Buttigieg told CNN’s Jake Tapper on Sunday. “We have a chance to get that right.”

Black and brown neighborhoods have been disproportionately divided by highway projects or left isolated by the lack of adequate transit and transportation resources.

In the Biden-Harris administration, we will make righting these wrongs an imperative.

The seeds of that tweet were buried in Buttigieg’s otherwise anodyne remarks upon accepting Biden’s nomination last week. Talking about his stewardship of South Bend, where he was mayor for eight years, Buttigieg talked about how he worked to “fill in the gaps that were created when underfunded transit resources left too many cut off from opportunity, just because they did not have the means to own a car.” He added that bad transportation planning leads to “misguided policies and missed opportunities [that] can reinforce racial and economic inequality, dividing or isolating neighborhoods, undermining government’s basic role of empowering Americans to thrive.”

The onetime Biden rival was an unexpected choice to run the US DOT and several transit experts questioned whether the former mayor of South Bend had enough experience or vision to manage a department with 55,000 employees and an $87-billion budget.

But many planners are willing to give Buttigieg a chance to work on righting the wrongs of government-funded multi-lane boondoggles after his initial remarks and tweet this weekend.

“As someone who is queer, a millennial, Midwestern, and has strong ties to the military (as a military kid), I’ve eagerly watched ‘Mayor Pete’ since he came on the scene. It is exciting to see someone who has blazed a path as a first in many ways ascend to this important position,” Tamika Butler, former executive director of the Los Angeles Neighborhood Land Trust, wrote following Biden’s announcement. “Buttigieg has always been willing to try and has succeeded where people have doubted him.”

And Buttigieg will have a key role shaping the Biden administration’s multi-trillion dollar infrastructure bill next year that could remake the downtown core of cities while reducing the disastrous effects of climate change.

“It has been decades, if ever, that our local governments have had the resources to function in completing even the basic tasks of governance,” Bay Area planner Chris Sensenig told Streetsblog. “That being said, we are optimistic that the time is right for the federal government to spend big on infrastructure. If the infrastructure bill is crafted to advance more than just the political interests of the few, we would hope that it would lead to investing in projects that further social and environmental justice issues.”

The legacy the interstate highway system has had far reaching effects on housing, income inequality, public health, and police brutality.

Moses was a pioneer of car culture, but the Federal Highway Act of 1944, which covered 50 percent of road construction costs for highways, and the Interstate Defense Highway Act of 1956, which covered 90 percent, accelerated the construction of highways in metro areas across the country. These new freeways sliced through poor neighborhoods (because, as Moses had found out a generation earlier, wealthy neighborhoods have the means to fight) and along waterfront areas as governments grabbed homes and businesses under the auspices of urban renewal.

But freeways that cut through communities had other implications. In Los Angeles, redlining and other discriminatory policies that displaced and isolated ethnic communities in a way that allowed police to brutalize residents south of Interstate 10.

And in northern California, Interstate 980 stunted economic growth in the region by cutting off the historically black neighborhood of West Oakland from the city’s downtown commercial district. The Claiborne Expressway in New Orleans cut through (and wrecked) the Treme neighborhood. Last year, a the Congress of New Urbanism said it was one of 10 urban highways that needed to go (I-980 was on the list, too).

Naturally, given what comes out of a car, the people who lived in housing that abutted these highways suffered higher rates of asthma, pre-term births, depression and even leukemia. Just this year, researchers found that a prolonged exposure to high levels of air pollution was associated with an 11-percent increase in risk of death from COVID-19.

Buttigieg isn’t the first US DOT secretary to criticize the isolating power of highways. President Obama’s second transportation secretary, Anthony Foxx, estimated that half a million households were forced to move due to interstate highway construction between 1957 and 1977. He decried infrastructure for “constraining” people when it is supposed to connect them.

Like Foxx, Buttigieg will have his hands full upending the status quo in Washington where car-dominated infrastructure projects typically receive four times as much funding as transit projects.

But he doesn’t have to look far for inspiration — or a warning.

Transportation for America and Third Way released a proposal earlier this month that would undo urban renewal policies. The groups recommended the Biden administration establish a $5-billion grant program for states to use to dismantle downtown expressways and specifies that the land created would be held in a trust for those displaced by the roadway a half-century ago.

Name a highway that razed or divided a Black or brown neighborhood in your city, or a city you know. I’ll start: I-95 through the Overton neighborhood, in Miami, Florida. Tag someone. @atlurbanist @BethOsborneT4A @CityFoodLover @ctbrown1911 @DrDesThePlanner @andreperryedu @rkbtwo https://t.co/U4IiTWKOFg

And plans that merely buried these highways underground — such as those in Boston and Seattle — were plagued by billions in cost overruns and little effect in reducing traffic problems and climate change.

Whenever the Biden administration decides to handle asphalt eyesores, they must ensure the Black and Latino communities won’t suffer from any adverse effects like tax increases and displacement and involve local leaders in any plan put forward.

“We need to look at highway teardown not as removing roads but on bringing about economic development,” Kristen Jeffers, creator of the Black Urbanist Multimedia Platform, told Streetsblog. “It doesn’t just end with removing a highway. Now that whole communities were built around them we need to make sure full community restoration happens.”