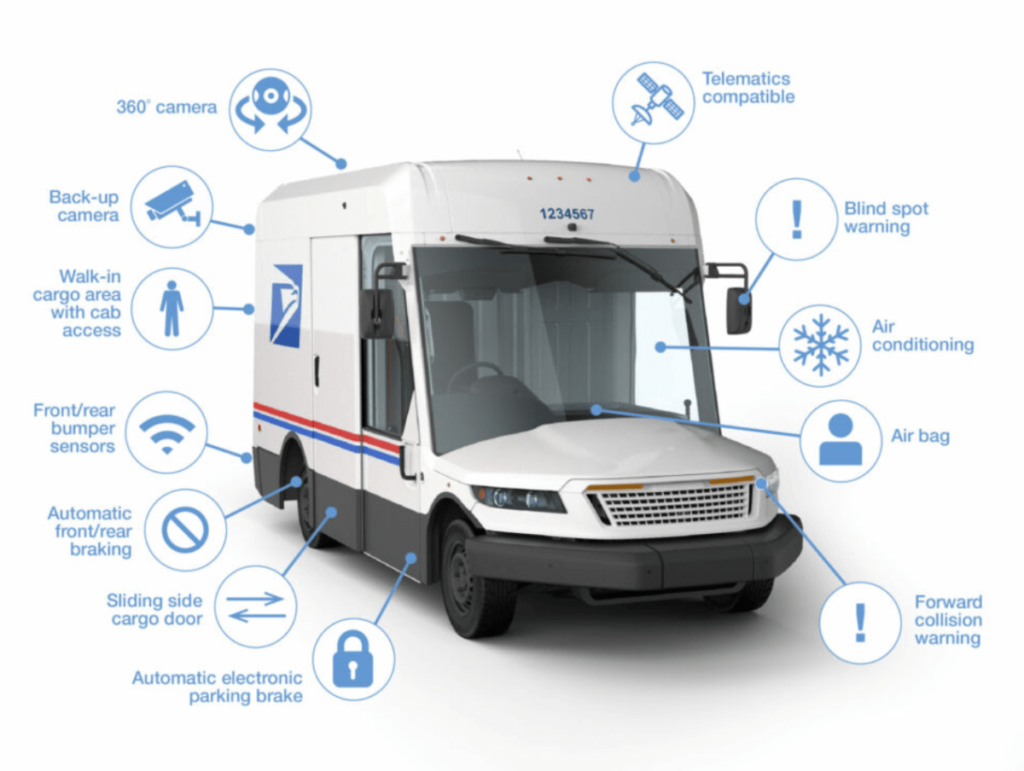 Neither snow nor rain nor heat nor gloom of night will stop the mail from making it to your door — but the next generation of mail trucks might be a lot more likely to stop for a pedestrian, thanks to the advanced safety features under the hood.

The United States Postal Service earned plaudits from street safety advocates for its new Richard Scarry-esque delivery vehicle last week, whose low-slung bumper will almost certainly be less fatal to a pedestrian in the event of a crash than the flat-nosed, semi-truck-style models that are common among most carriers, because it will initially strike most walkers at leg-height rather than at the level of the head or neck.  But there’s another reason to celebrate the next-gen trucks when they roll out on city roads in 2023: their suite of advanced driver assistance systems, which are proven to decrease collisions by leaps and bounds.

In addition to an ultra-wide windshield that will reduce the colossal blind spots for which large trucks and SUVS have long been notorious, the USPS van itself will be able to sense and react to its surroundings, thanks to a 360-degree camera, a second, dedicated back-up camera, a forward collision warning system, blind spot detection, and even automatic emergency braking. Each of these features have been proven to reduce collisions by double-digit percentages — and unlike some advanced driver safety tech, none has been shown to lull drivers into the kind of false sense of security that is correlated with reckless computer-assisted driving.

The National Transportation Safety Board has long advocated for collision avoidance systems like these to be included on all new vehicles on its annual Most Wanted List.

Advocates applauded USPS for going above and beyond for vulnerable road users, but questioned our abysmal national vehicle safety standards that make the new truck seem exceptional at all. Europe voted to require a range of ADAS on the newest cars and trucks by the end of next year, and 66 percent of new Australian cars already have it; the U.S., meanwhile, can’t even be bothered to test how likely a car is to kill a walker before we allow it on our roads, much less require collision detection tech that might stop the car before it strikes a person.

Some hope that the new mail truck will help the public begin to understand ADAS as a safety must rather than a luxury feature only available on the expensive cars — and pressure regulators to amend the New Car Assessment Program to reflect that.

“While this is a safety step in the right direction, all new vehicles should have these technologies as standard equipment compliant with minimum performance standards,” said Cathy Chase, president of the non-profit Advocates for Highway and Auto Safety. “As automakers begin retooling their vehicles to produce more electric models to protect our environment, it is an opportune and economically efficient time to incorporate these safety technologies to protect the lives of road users.”

Of course, it should be noted that even the most advanced collision-avoidance systems aren’t foolproof, especially at high speeds — and the safest mail delivery vehicle out there is still a cargo bike or a cart.