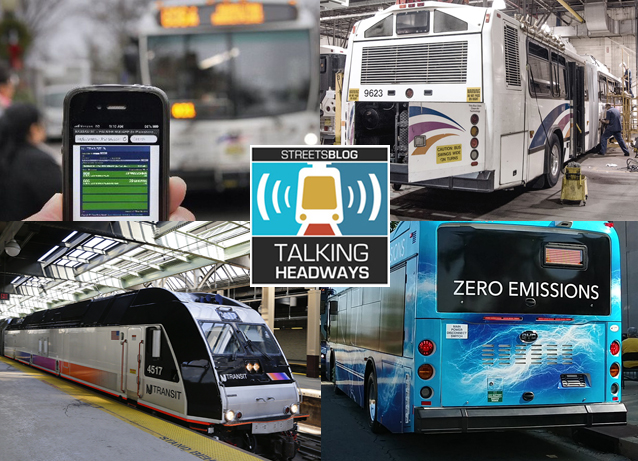 This week Dan Baer, senior vice president at WSP, talks with Kevin Corbett, president and CEO of New Jersey Transit. In this one-on-one conversation, Baer and Corbett talk about NJ Transit’s response to the pandemic, bus electrification, new technologies, and much more.

Dan Baer: As you said, Kevin, the thinking never stops, and the imagination never stops. And you always have to look into the future and the changes that are going to have to be, and you’re gonna have to be adaptable and you’re gonna have to be flexible. So NJ Transit, it’s not just thinking about today’s technology. They’re also exploring new and advanced technologies for their bus service and their rail service. So let’s talk a little bit about integrating some of those new technologies, such as electric and automated vehicles, and the steps that NJ Transit is taking and recognize that this is a significant investment people don’t understand.

It’s not just about buying battery buses; it’s making an entire transition for your service and facilities as well. So talk a little bit about how you’re approaching new technology at NJ Transit.

Kevin Corbett: It’s scary. I’m a blue and gold officer for the Naval Academy and the No. 1 major is cybersecurity. They just built the first building in 40 years. Hopper Hall is dedicated to cybersecurity. So if you look at transportation, everything we do is integrated with technology and, certainly, environmental concerns when you’re talking about and say electrification. We really put a lot of resources into building up. We had so much outdated technology software and that wasn’t even supported by vendors anymore … in languages that were long forgotten.

So one was upgrading all our systems and that’s a whole field. I believe we’re the first transit system … ISO certified for cybersecurity, first transit system in the country. Our CIO came from the private sector; he’s really helped us up our game significantly there. Then there’s a technology in everything, whether it be our locomotives; we just started taking delivery of a 25 dual mode locomotives, we go on the freights with no catenary, then go back on some of our territory on the Northeast Corridor with catenary. So, you know, you look at the technology and those, and we’ve ordered 113 new multilevels from Bombardier now Alstom. Those are going to be sets with where they’re going to be self-propelled so that we don’t need to have an engine similar to our old eras, but you know, the technology advanced there.

So a lot of interesting things that the riders may take for granted. We’re really upping our game and a number of areas, but on sustainability, as you touched on the bus side, we move over half a million people a day by bus, pre-COVID, but okay. After COVID, we’re already up to about 60-plus percent is coming back very quickly. In the last few weeks, we really see ridership picking up, even more so on the weekends. I guess people don’t want to go back to work. They want to party as always; we see that ridership coming back. So we had to prepare for that. We were hit so bad with Sandy, and we’re the most densely populated state. So when you start talking about air quality and climate, those are of very high concern, as you know, in New Jersey, so bus electrification [is important].

We have roughly 2,500 buses in our system, and it’s not like you can go to Walmart and buy 2,500 toasters and just plug them into the wall. I think, you know, working with APTA and predictably, UITP, the international group based in Brussels, how do we sort out being so far behind at NJT. How could we leapfrog benefit from the experience of others or sort of leapfrog a couple of generations of technology. And we really see that on the bus side, that it’s more about the charging infrastructure. We look at the electric load we’re looking to do, one of our largest upcoming projects in our cap plan is a new Northern bus garage that will house 500 buses.

We just acquired the land moving ahead with that project. And it’s really about laying out. It will be the first bus garage-depot that we have that’s designed to be for full electrification. The governor set out an ambitious goal for us, his energy master plan, by 2040 to be a hundred percent electric buses. This is a key part of getting that infrastructure in place. The buses are important, but they really are almost a secondary issue. The technology is improving. And battery storage to me is somewhat similar to the aviation industry, maybe in between 1910 and 1940 years. Things change dramatically, but you need to have runways for the airline for us, we needed to have the infrastructure.

So in addition to the Northern bus garage, we’re now looking at 12 other garages we have around the state — major garages —to look to upgrade them, to install that infrastructure. It’s a huge, huge cost. It’s going to be billions of dollars for us. When you think of the industry overall, for all transportation, as you know, vehicles switch over, what that means, the electric grid, substations. So it’s not just putting in some equipment into a bus garage; it really goes right back to working with our public utilities to make sure that they can provide that load. So it’s a massive undertaking.