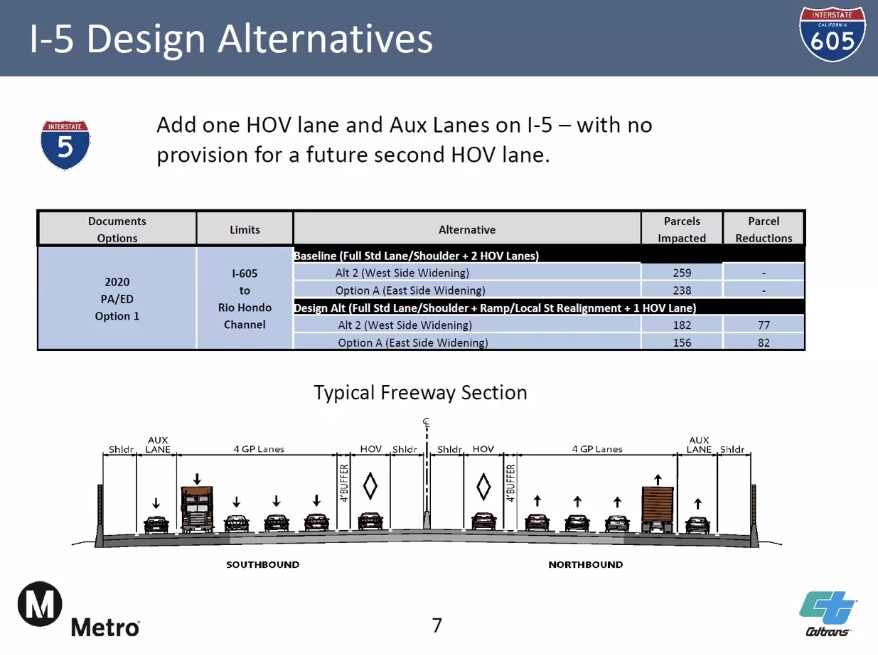 This morning, in an OC Register article – syndicated in various Southern California News Group publications including The Daily News – Caltrans spokesperson Marc Bischoff stated: “There are no (active) plans” to further widen the 5 Freeway north of the 605 Freeway.

In the article, titled Not all of the I-5 will get widened, at least for now, a reader named Rich questioned:

Do you know if there is a plan to widen the I-5 from the I-605 to the East L.A. Interchange? Once the section from the Orange County line to the I-605 is done, the section north of it will be the pinch point with only three lanes.

…the Los Angeles County Metropolitan Transportation Authority [Metro] had wanted to widen the I-5 just north of the I-605 freeway. But nothing has come of it so far, with the plan getting shelved.

“There are no (active) plans,” said Marc Bischoff, a Caltrans spokesman.

Right now, going north, the I-5 is five lanes in each direction in Orange County and goes to three at the Los Angeles County border. But next month, a fourth lane will mostly be available for the six miles in each direction to the I-605, and then in summer 2022 a fifth lane, for carpoolers, is to open.

Marc Bischoff is a Public Information Officer for Caltrans District 7, which includes L.A. and Ventura Counties. He is either lying or he doesn’t know what his agency is doing.

Last August, Caltrans and Metro announced plans to tear out hundreds of homes to widen about three miles of the 5 Freeway through the cities of Santa Fe Springs and Downey – as part of the 605 Freeway Corridor Improvement Project. Numerous parties voiced opposition to the Metro/Caltrans plan. The Metro board has not “shelved” the plan, but directed staff to include less harmful alternatives in the 605CIP environmental studies (which Metro has already spent more than $60 million on, and which Metro had scheduled to be approved in late 2020.) Just last week, Metro presented some information about a new 5 Freeway widening alternative that would still demolish an estimated 156-182 homes in Downey.

How is this not an active plan to widen the 5 Freeway?

Streetsblog emailed Bischoff and Radcliffe and will update this article with any clarifying response they provide.

Update 10:45 a.m. Just after posting, Streetsblog received a response from the OC Register article’s author Jim Radcliffe stating “In regard to the shelved project, the spokesman said there was a Metro project to do some widening on that stretch but now other options are being looked at.” Streetsblog would note that, based on last week’s presentation, it would be inaccurate to term that 5 Freeway widening as “shelved.”