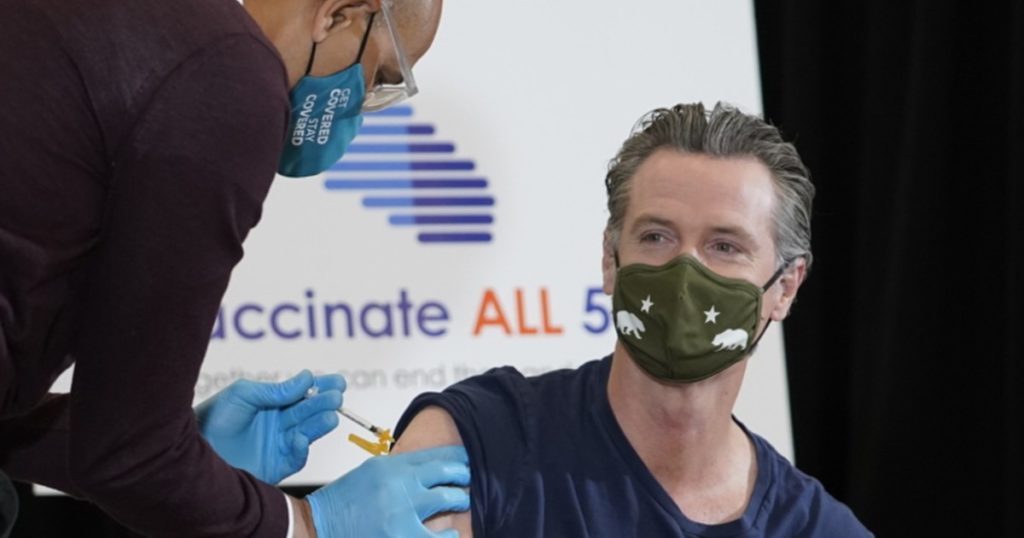 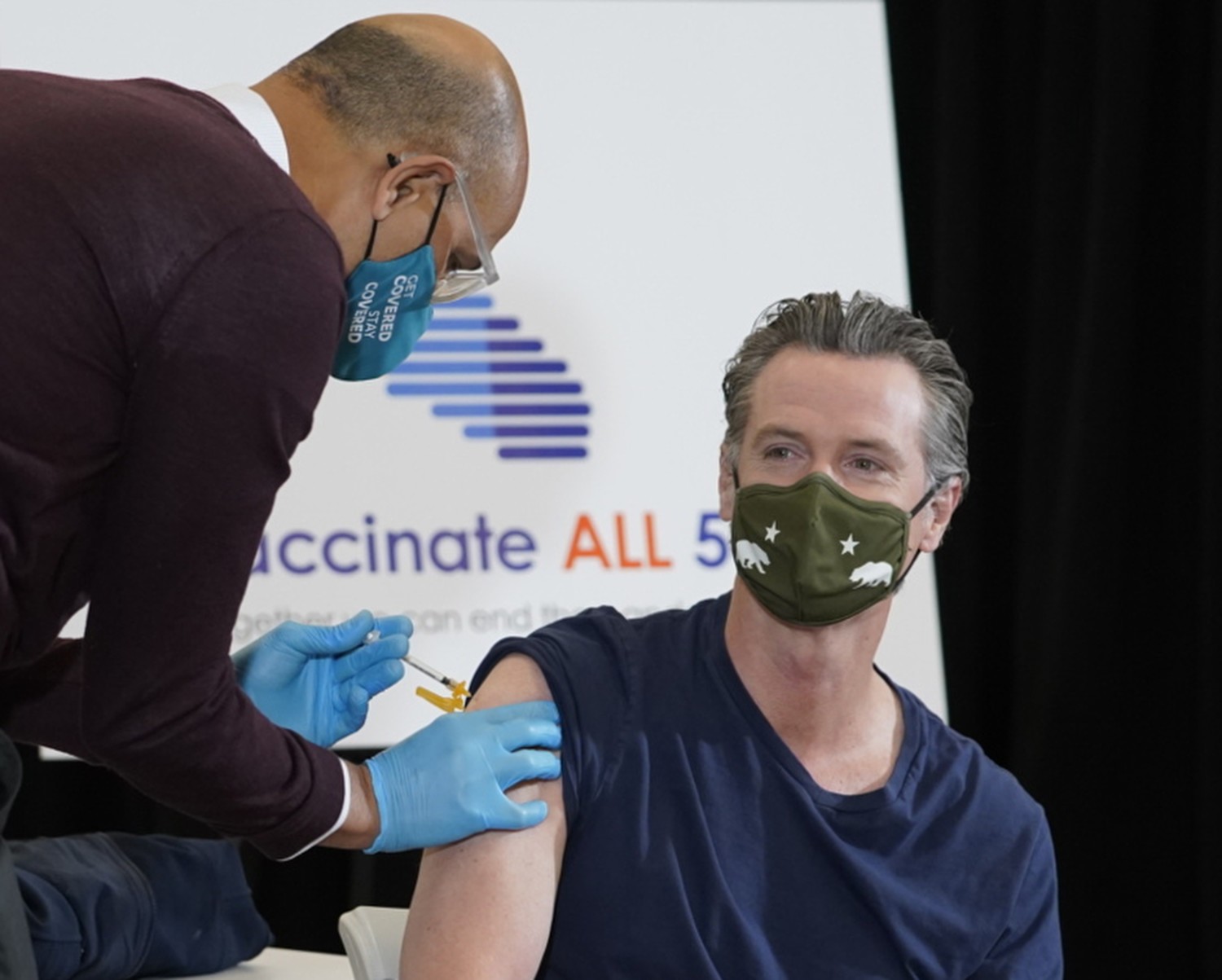 Gov. Gavin Newsom said he chose to get vaccinated on camera to boost confidence in the single-dose Johnson & Johnson vaccine, but his long-awaited shot in the arm also symbolizes how mass vaccinations could help inoculate the governor against the pending recall.

Newsom’s political survival hinges on how Californians feel about their lives and their governor in the fall when they will probably cast their ballots. And already, voters are more confident about the future — and Newsom — as vaccinations increase in the state and more people begin to envision a return to normal life.

On Thursday, California widely expanded vaccine eligibility to all residents age 50 and older, a change that allowed the 53-year-old governor to qualify for an appointment and added millions of others to the priority line.

“It’s been an extraordinarily challenging year,” Newsom said Thursday at a vaccine clinic at the Baldwin Hills Crenshaw Plaza. “So much fear, so much anxiety. But now, growing optimism about our fate and future — not only here in Los Angeles, in Southern California, but all across our state.”

More than 30% of Californians have received at least one dose of a COVID-19 vaccine, with 18 million shots administered so far, Newsom said. Expecting an increase in supply, his administration is expanding eligibility again on April 15 to include the entire adult population — all people 16 and over.

If the supply holds, L.A. County Public Health Director Barbara Ferrer said this week that 80% of eligible Angelenos could be vaccinated against COVID-19 by the end of June.

That timeline bodes well for Newsom, said Dan Schnur, who previously worked as a spokesman for Gov. Pete Wilson and now teaches political communications at USC and UC Berkeley.

“Every vaccination gets him a little bit closer to defeating the recall,” he said. “If people think about the pandemic in the past tense, then Newsom almost certainly survives the recall.”

A Public Policy Institute of California poll conducted in March found that 79% of likely voters believe the worst of the pandemic is over and only 40% supported the recall. The vast majority of those in favor of removing Newsom were Republicans.

“The only way that he can lose this recall is if discontent is wide enough among independents and Democrats,” said Bruce Cain, a political scientist at Stanford University. “The most likely outcome is that we’ll be back to some kind of normality and people’s memory of what happened fades.”

But Cain warned that unforeseen problems, such as the proliferation of COVID-19 variants that are resistant to vaccine or if a large percentage of Californians refuse to be inoculated, could present challenges for Newsom if the state’s progress is halted.

Newsom said Thursday that California expects to receive 2.4 million doses next week, up a third from two weeks ago, and has noted that the only hurdle to quickly inoculating Californians is a stretched federal supply chain.

At the same time, perspectives among voters about the state’s distribution of vaccines have improved in recent months, from about 28% who gave California positive marks in January to 45% in March, according to PPIC.

The new optimism comes after a difficult year for the governor, whose administration struggled to lead the most populous state in the nation through an unprecedented pandemic. While some of those difficulties could be attributed to the extraordinary challenges of COVID-19 and the absence of federal guidance, others were self-imposed, such as his decision to attend a dinner party at the French Laundry restaurant.

Republican political operatives supporting the recall campaign say they have yet to begin to call attention to Newsom’s major vulnerabilities, such as long delays in payments for jobless benefits and other issues.

The recent arrival of the single-shot J&J vaccine in California, which received Food and Drug Administration approval in February, provides the opportunity for the state to inoculate residents more quickly. On Thursday, Newsom became the latest top official in his administration to receive that vaccine at a public event in hopes of easing any concerns about its efficacy.

Experts say it’s difficult to compare vaccines because they were tested in different parts of the world at different times. The J&J shot was found to have 85.4% efficacy against severe disease and hospitalization 28 days after inoculation and was tested in clinical trials against COVID-19 variants first identified in South Africa and Brazil, according to the World Health Organization.

Los Angeles Mayor Eric Garcetti received his first vaccine in January and other politicians were inoculated weeks before Newsom, but the governor was careful not to give the appearance that he was cutting the line.

“He really didn’t have a choice,” Schnur said. “Some politicians have the luxury of getting vaccinated right away. A governor who attended a fancy dinner and sends his children to private school simply didn’t have that luxury.”