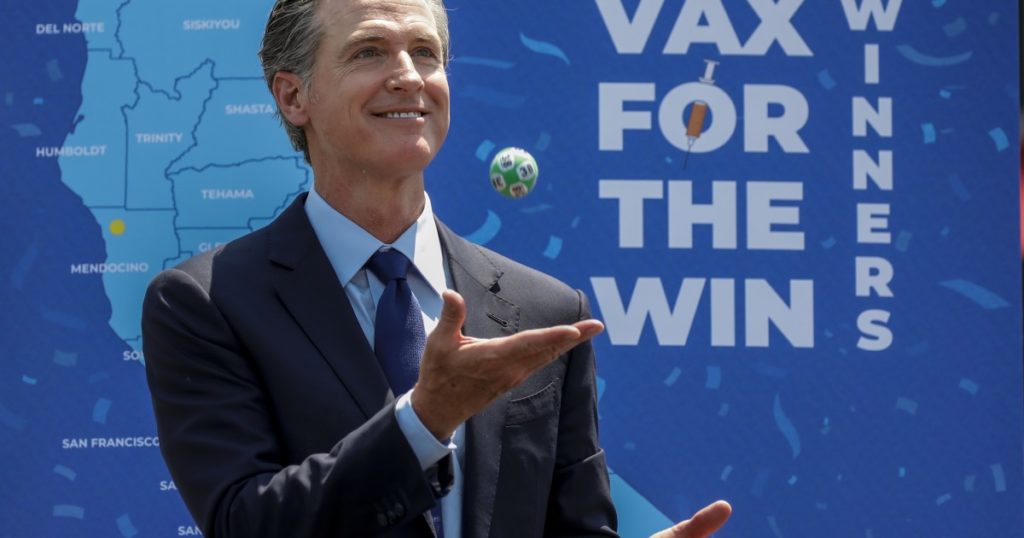 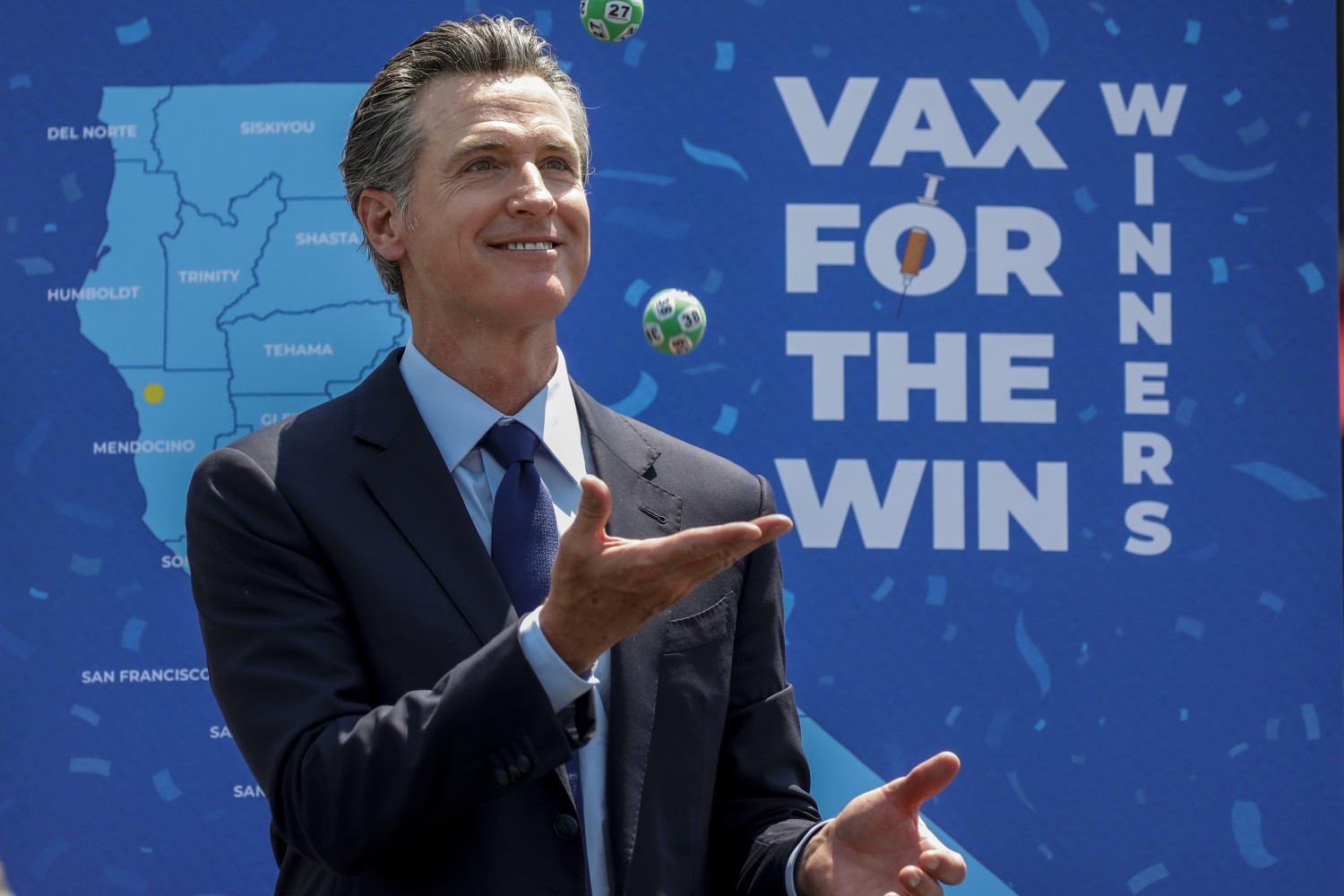 As Californians streamed into Universal Studios behind him, an unmasked and unusually jovial Gov. Gavin Newsom declared Tuesday that the state was reopened and finally ready to “turn the page” after a tough year.

And as he ends COVID-19 restrictions, Newsom is doing his best to shut the book on the recall months before the election.

Early in the COVID-19 pandemic, Newsom was praised for his health-first approach to governing. But muddled policies, school closures and his own damaging missteps, such as his French Laundry dinner during the state shutdown, frustrated even some of his staunchest supporters and inflamed an angry bloc of voters who had grown tired of his emergency use of executive powers.

Now his political fortunes are on the rise again.

Newsom is back in the spotlight, only this time he’s giving away $1.5-million cash prizes and free vacations in a lottery for inoculated Californians instead of offering grim news about infections and deaths, and telling people what they can do instead of what they cannot.

“The recall thrived because of the pandemic, and now it’s going to wither because of the pandemic,” said Democratic political consultant Rose Kapolczynski, who was former Sen. Barbara Boxer’s chief campaign advisor. “In the end voters know the governor isn’t perfect, but he’s delivering on what they want most, which is reopening the state.”

Given California’s low coronavirus infection rates and high vaccination levels, Newsom’s move to rescind restrictions is likely to ensure the lockdowns and political errors that helped fuel dissension fade into memories by the time voters head to the polls, political observers say.

The state’s recovery, combined with the desire of Californians to get on with their lives, also drains oxygen from the recall effort.

Newsom’s announcement in April that he planned to reopen California on June 15 was met with mixed reaction by some who worried he was making a risky bet in a state that had already endured the cycles of easing and reinstating restrictions, and others who expected increased vaccinations to help contain the virus by his deadline.

Dr. Robert Wachter, professor and chairman of the Department of Medicine at UC San Francisco, said the Delta variant of the virus could result in another jump in cases in the fall, but believes California is unlikely to experience the same kind of surges that followed prior reopenings.

“All things calculated, I think it was a smart date and I think it has actually worked out pretty well,” Wachter said.

Wachter and other health experts give California and its governor high marks for leading during the pandemic compared with other states.

California ranks among the lower third of states in the country for per capita COVID-19 death rates, with lower mortality rates per 100,000 residents than Florida and Texas, according to data from the Centers for Disease Control and Prevention.

“I think the most important thing that happened is it seemed these were well thought out, scientifically based standards that took into account the best information we had at the time,” Wachter said. “Of course, some people didn’t like that, but he saved a lot of lives.”

Although the timeline appears to be working in Newsom’s favor, that doesn’t mean other unforeseen problems won’t arise.

“Looks like it’s smooth sailing for Gov. Newsom, but that could change,” said Darry Sragow, a veteran Democratic strategist. “It could change very quickly. And he knows that.”

The date of the recall has not been set, and Sragow warned that while Newsom’s advisors want to push for an earlier election, late summer timing could affect voter turnout if parents are preoccupied as their children return to school. Less likely political dangers, such as a botched response to a natural disaster or sweeping power outages, or some other major governing failure, could present challenges.

The emergence of a popular Democratic opponent before election day could also shake up the race.

No well-known Democratic challengers have announced plans to run for governor. The state Democratic Party and the governor’s campaign have discouraged the idea of a replacement candidate from within their own ranks out of fear that voters may be more inclined to recall Newsom if another Democrat is on the ballot.

If Newsom is recalled and there’s no popular Democratic replacement, Republicans could have a wide-open lane to the top job in California government.

“If things go on autopilot, the governor is going to be fine,” said Robin Swanson, a Democratic strategist. “If there are unanticipated opponents or events, then I think it could be rockier.”

Orrin Heatlie, one of the main proponents of the recall campaign, said it would be a mistake to dismiss the festering animosity some California voters still have toward Newsom, including over the shutdown of public schools and the billions in taxpayers funds lost by the state in paying out fraudulent unemployment claims.

Heatlie said he believes Newsom is tossing around millions in prizes to woo voters and to keep Democrats in line.

“He’s running around like a mafia don passing out money to his loyal followers to try and either win them over or maintain their loyalty,” Heatlie said.

He added that he believes Californians still remember the economic devastation they suffered due to the lockdowns and now are worried that Newsom will mandate vaccinations and order people to carry “vaccination passports” to prove they have been inoculated, something the governor has repeatedly denied.

Mark Baldassare, president and CEO of the Public Policy Institute of California, remains skeptical that Newsom’s solid support among California voters will diminish before the election. The vast majority of Californians already have made up their minds about Newsom, he said.

In the institute’s most recent poll released in May, 55% of likely California voters approved of the job Newsom was doing as governor, compared with 35% who disapproved. That’s almost exactly where Newsom stood before the COVID-19 pandemic, according to a PPIC poll released in February 2020.

Just 4% of California voters were undecided on how they felt about Newsom in May.

The May poll also was bad news for proponents of the recall effort — 40% of likely voters supported removing Newsom from office, while 57% would keep him in power. Just 3% were undecided.

“The burden of proof is on the proponents to give people a reason to make change,” Baldassare said. “So far, based on our polling, they haven’t made the case.”