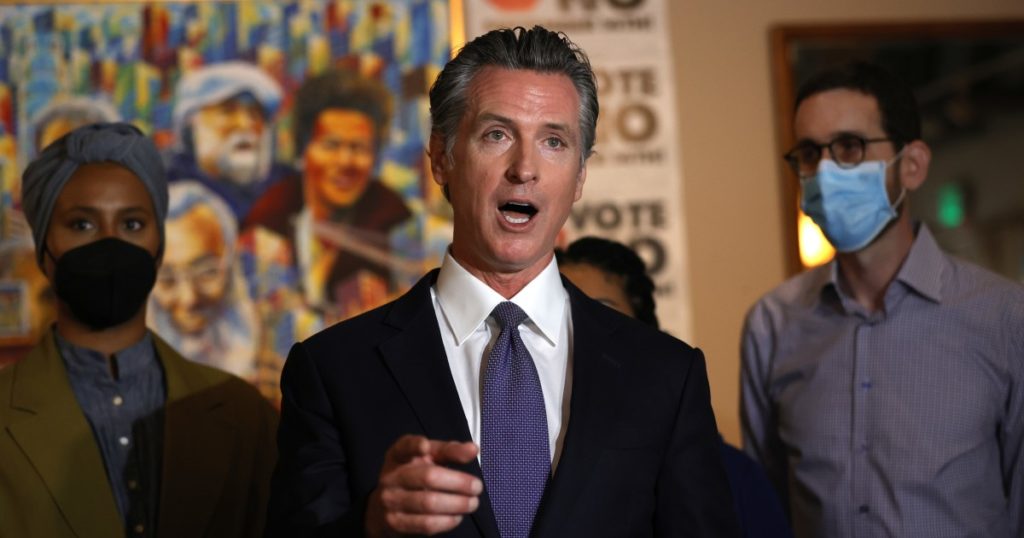 Few politicians possess the natural gifts needed to inspire voters. And Gov. Gavin Newsom certainly is not one of them.

If the 53-year-old Democrat were blessed with the ability to attract throngs of devoted followers, he wouldn’t be sweating a Republican-led effort to oust him.

It’s not that California’s governor is disliked by hordes of voters. His job performance ratings have remained decent — 50% approval and 42% disapproval among registered voters in a July poll by the UC Berkeley Institute of Governmental Studies.

But there isn’t much endearment — most crucially among Democratic voters. That is evidenced in the apathy of Democrats toward the Sept. 14 recall election. They aren’t rushing to rescue the governor.

The absence of passion is why the recall contest is so close — 47% of likely voters for dumping Newsom and 50% for keeping him, the IGS poll shows.

Although Republican voters are outnumbered by Democrats nearly 2 to 1 in California, they’re currently making up for it with a strong resolve to recall the Democratic governor and end one-party rule in Sacramento.

Voter turnout “is likely to be far higher among Republicans than Democrats and No Party Preference voters,” IGS Poll Director Mark DiCamillo said in releasing the survey.

That could mean big trouble for Newsom. His fate depends on how many Democrats bother to vote.

If Newsom survives, it will be because of this era’s rigid political polarization. Democrats won’t be voting for him as much as they’ll be rejecting what they consider the scary notion of turning over the governor’s office to a Republican.

In fact, that concept — vote against the GOP and evil Trumpism — is what Newsom’s TV ads are pitching.

You can count on a few fingers the number of California governors and U.S. presidents who have excelled at inspiring voter devotion in the last 100 years. Earl Warren and Ronald Reagan. Franklin Roosevelt and John F. Kennedy. Bill Clinton and Barack Obama for Democrats and Donald Trump for Republicans.

What is Newsom missing?

“Politics is no different than any walk of life. People either like you or they don’t,” says veteran Democratic strategist Darry Sragow, who publishes the California Target Book, which charts state legislative and congressional races.

And in politics, he says, “people just have to like you.”

“I don’t run into that with real people,” Carrick says.

But I do — in emails and among nonpolitical friends. And that’s why I’m writing this.

One-on-one, Newsom is plenty likable. He’s pleasant, puts people at ease and is impressive in his knowledge of public policy.

But that chemistry doesn’t often come through in large groups or on TV.

That’s probably because his public rhetoric — especially when ad-libbed — is frequently repetitive and long-winded. There’s also not much modulation, just high-frequency monotone. And he doesn’t know when to shut up.

One prime example of disconnection was when the governor gave his annual State of the State address before 54,000 empty seats at Dodger Stadium in March. He was standing on green grass just off the warning track in deep center field, wearing a dark blue suit with white shirt and tie. Definitely out of uniform and connected to zilch.

As I wrote at the time, it would be like the president giving his State of the Union address in an empty Yankee Stadium.

Adding to the disconnection is an inescapable touch of elitism.

Newsom is a liberal San Franciscan who made a fortune selling classy wine. He’s matinee-idol handsome with perpetually coiffed hair that should be messed up occasionally just to look normal. His casual clothes for TV seem styled.

That’s all fine, but it doesn’t connect with regular people. And he gets unfairly tagged by some rivals with being a “pretty boy.”

Lots of parents, I also suspect, are resentful because his children were privileged to attend private school in classrooms during the pandemic while their kids were stuck at home with boring public school online courses.

That’s combined with the anger Newsom generated by issuing reams of inconsistent, confusing edicts forcing businesses to shut down during the pandemic.

The elitism was crystallized for voters by Newsom’s boneheaded attendance in November at a lobbyist friend’s fancy birthday dinner with several people, none of them wearing masks and all dining inside. It was hypocritical because the governor had been lecturing the rest of us to avoid such gatherings where COVID-19 could spread.

The attention-grabber was that the opulent wine country restaurant is ultra-expensive and named the French Laundry, the words practically a synonym for elitism.

This reckless act by Newsom did more than anything else to tarnish his personal image. It’s doubtful there’d be a recall election without it. The news leak started an avalanche of voter signatures to qualify the recall measure for the ballot.

“I made a bad mistake,” Newsom quickly admitted. “I need to preach and practice, not just preach and not practice.”

But the damage had been done and it cannot be overstated.

What Newsom should do now is use his telegenic looks in campaign spots, his mug looking straight into the camera and telling Democrats what’s at stake in the election.