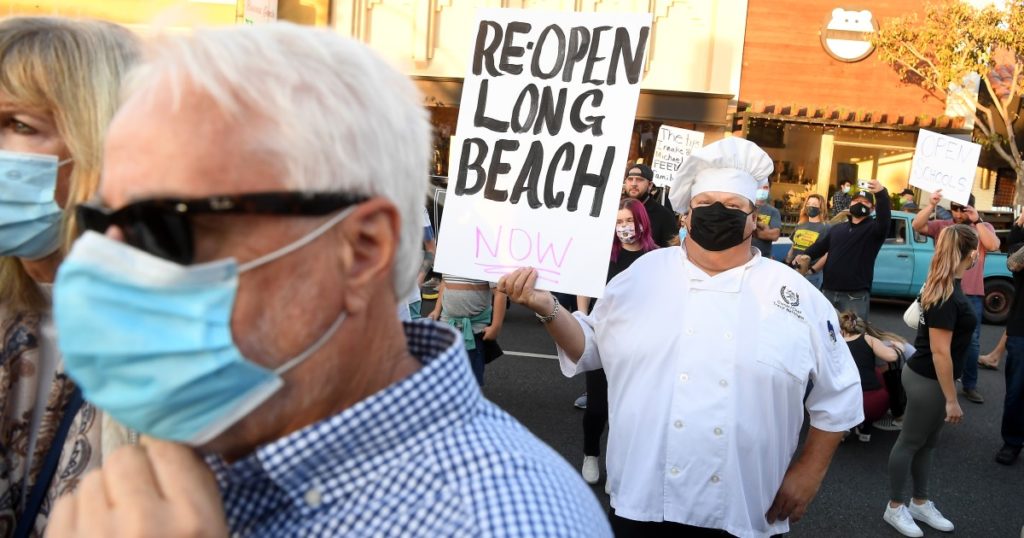 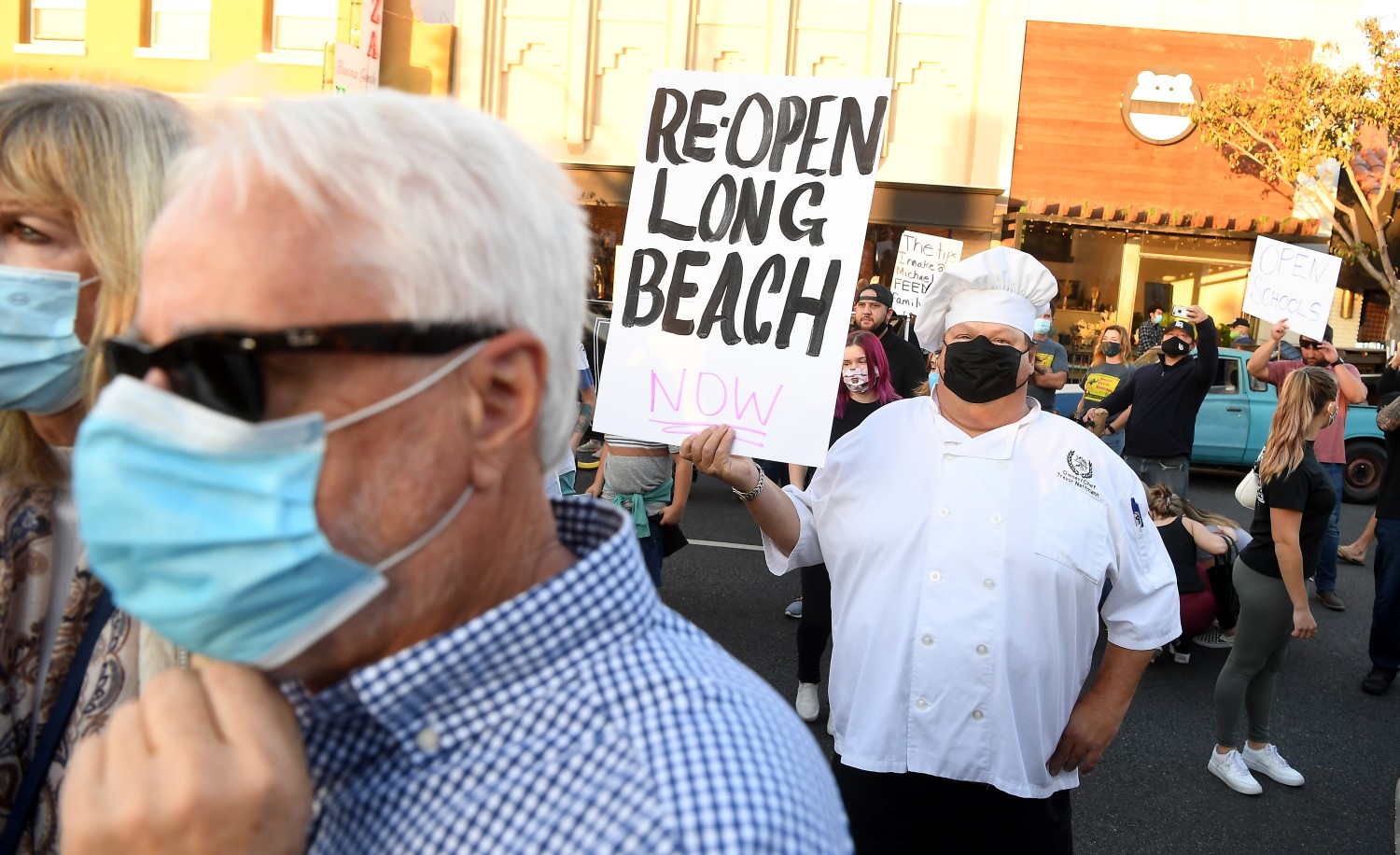 With California facing an unprecedented deficiency in hospital beds and critical care services due to a sharp rise in COVID-19 cases, Gov. Gavin Newsom could unveil new restrictions Thursday on economic and lifestyle activities that could last through the end of the holiday season.

Newsom, who has scheduled a midday event to outline his administration’s response to the rapid spread of the coronavirus, hinted Monday that a new statewide shutdown, reminiscent of the one ordered in March, could be on the horizon. State health officials said their latest projections of the virus’ spread showed intensive care units could be filled to capacity in as little as two weeks.

“If these trends continue,” Newsom said Monday, “we’re going to have to take much more dramatic, arguably drastic, action.”

Imposing a new round of far-reaching measures would mark a swift escalation of the state’s response to deteriorating public health conditions. On Nov. 19, the governor ordered an overnight curfew in counties with the highest identified risk levels — those in the most restrictive, or “purple,” level of the state’s four-tier coronavirus monitoring system — a list that now includes some 99% of California’s population.

Data compiled by The Times show the state has averaged nearly 15,000 cases a day over the last week, triple the rate in the last month. COVID-19 hospitalizations have also tripled over the same time period. And an average of 67 Californians were dying daily from COVID-19 over the last week, a 60% jump from mid-November.

Some communities have implemented even stricter measures. On Monday, Los Angeles County enacted far-reaching orders banning gatherings of people from different households and imposing tighter capacity limits on in-person shopping. Santa Clara County has imposed its own mandatory travel quarantine on people traveling from 150 miles away and forbidden hotels from leasing rooms to tourists.

Newsom and his Health and Human Services secretary, Dr. Mark Ghaly, emphasized Monday that additional actions would be taken in response to the severe strain the virus’ spread was placing on healthcare services — in particular, on hospital capacity across California and intensive care services in those facilities. Based on data collected through last weekend, officials estimated that all existing ICU beds in the state could be filled in two weeks’ time, with some parts of Northern California at capacity within a matter of days.

“If a patient needs care and they can’t get it in a hospital in their community, in their county, then we need to make sure that surrounding counties’ hospitals are able to serve those individuals,” Ghaly said. “The second half of December could be pushing the limits in some areas, [and] we want to act sooner than that so that we can get transmission down and we can handle those potential high ICU surges.”

A new statewide shutdown is likely to generate the same criticisms as the spring order. Business owners condemned the initial effort for its definition of “essential businesses,” which were allowed to remain open. By mid-May, Newsom relented and allowed counties to go at their own pace in making many of those determinations — a course of action he abandoned in August following another surge in coronavirus cases.

Closing stores and shopping malls in the run-up to the holiday season could strike a powerful blow to the state’s hobbled economy. In recent days, Newsom has announced a package of loan and grant efforts for small businesses as well as the expansion of a program that allows businesses to delay payment of sales tax collections and use the money as a short-term bridge loan.

Some epidemiologists say state officials may have no choice but to impose a stricter shutdown order to avoid one of the worst public health catastrophes in the sate’s modern history, with California’s death toll of nearly 20,000 plausibly doubling by the end of winter.

In late October, France was forced to impose a new shutdown, and some business owners were angry. But within weeks, the nation’s steep surge in infections fell dramatically.

The initial coronavirus wave “has now become a viral tsunami,” said Dr. Robert Kim-Farley, medical epidemiologist and infectious disease expert at the UCLA Fielding School of Public Health. “The virus is now everywhere, and so therefore the restriction of activities needs to also be applied everywhere to be able to return to where we were — on a decreasing trend.”

The challenge for California’s leaders would be to collectively persuade the public of the severity of the crisis, and that it’s worth the pain of another temporary closure.

“What we really need is leaders to, I think, lead more out of hope and not out of fear,” said Dr. Kirsten Bibbins-Domingo, chair of UC San Francisco’s Department of Epidemiology and Biostatistics. “We have two highly effective vaccinations just around the corner…. We have an end in sight to the pandemic. But we have to get through the next month” to avoid an “exponential rise in cases, transmissions, hospitalizations and death.”

A new effort to tighten the number of allowed activities would also be closely watched by education advocates and parents who have clamored for a more comprehensive statewide set of rules outlining when to open or close K-12 public schools.

In the summer, state officials determined that schools could open once a county had moved out of the state’s most restrictive tier and been free of the most widespread virus conditions for at least two weeks, but allowed those campuses to remain open even when local conditions worsened. In addition, a number of private schools have been given waivers by state officials to resume in-person learning while students attending many of California’s largest school districts remain in full-time distance learning.

Newsom, who has been in quarantine since three of his children were in close proximity to a California Highway Patrol officer who tested positive for the coronavirus, said Monday that the projections of an overloaded hospital system would only come to fruition if the state made no changes in the coming weeks.

“I want folks to know that we intend to bend this proverbial curve and impact the statistics favorably,” he said.