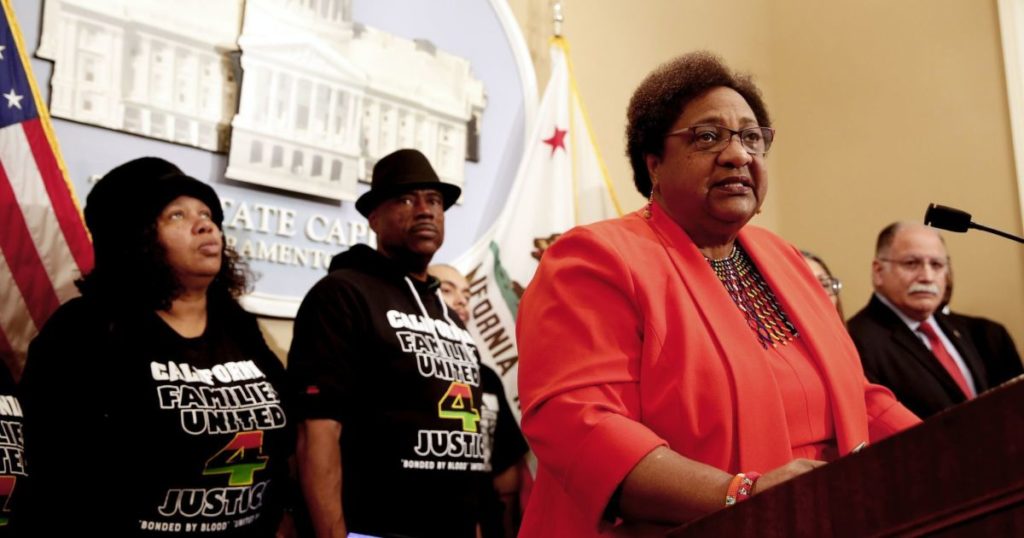 Gov. Gavin Newsom will take swift action Tuesday to fill the newly vacant post of California secretary of state by selecting Democratic Assemblywoman Shirley Weber to serve as the state’s chief elections officer, the result of his decision to appoint incumbent Secretary of State Alex Padilla to the U.S. Senate.

Weber, a 72-year-old retired professor and San Diego legislator, has earned a reputation for taking on tough issues at the state Capitol. She would be only the fourth woman to ever hold the position and the first Black woman to do so in state history.

Newsom is expected to formally announce his selection of Weber on Tuesday, according to a source close to the governor who was not authorized to speak on the record and asked not to be identified. The speedy decision by Newsom to announce the appointment on the same day he chose Padilla to fill the Senate seat of Vice President-elect Kamala Harris may reflect the intense pressure the governor faced by passing over several Black women for the job of representing California in the upper house of Congress.

It also will heighten the likelihood of intra-party clashes in 2022, as other two other Democratic legislators have already opened campaign committees to run for the position that Padilla would have left due to term limits. Weber’s appointment must be confirmed by both houses of the Legislature.

Weber was elected to the Assembly in 2012 representing southeastern San Diego and its eastern suburbs. Known for her passionate speeches during legislative floor debates, she is often hailed as a moral authority for Democratic lawmakers and has taken the lead on contentious legislative fights over police use of force, education and racial injustice.

Her two-year battle to create more strict requirements for when and how police officers can use deadly force ended last year with Newsom’s signature on Assembly Bill 392, a law hailed as creating some of the toughest standards in the nation. The San Diego Union-Tribune Editorial Board named Weber the San Diegan of the Year in 2019, calling her ability to pass the bill “a giant accomplishment.”

Weber serves as chair of the California Legislative Black Caucus and championed a first-in-the-nation law this year that requires the state to study and develop proposals for potential reparations to descendants of enslaved people and those affected by slavery.

The daughter of an Arkansas sharecropper who fled the state when his life was threatened over a dispute with a white farmer, Weber’s family settled in South Los Angeles’ Pueblo Del Rio housing projects and she was educated in South Central L.A. schools. Her undergraduate and graduate degrees were earned at UCLA with a doctorate awarded when she was 26. She taught in the Department of Africana Studies at San Diego State University for more than 40 years.

Weber began her political career at the local level and served as president of the San Diego Unified School District Board of Trustees, chair of the San Diego Citizens’ Equal Opportunity Commission and on the boards of the NAACP and YWCA. The mother of two adult children and wife to the late California state Judge Daniel Weber, she has created a leadership network for young women of color and served as a mentor to many in her local community.

Weber briefly served as chair of the Assembly Elections and Redistricting Committee in 2016. A law she wrote that same year allows some felons serving a sentence in county jail to vote while behind bars, an effort she said at the time could reduce recidivism by fostering more civic engagement for those who will reenter society. A trio of laws she authored beginning in 2013 required more voter registration information to be provided to probationers and parolees.

Padilla, who was elected secretary of state in 2014 and reelected in 2018, has championed several efforts to expand voter registration services and voting by mail. In 2016, he lobbied the California Legislature and then-Gov. Jerry Brown to enact a far-reaching law that allows counties to close neighborhood polling places in favor of opening community vote centers and mailing every registered voter a ballot. Weber voted for the bill as a member of the Assembly and it has been adopted by 15 counties.

Earlier this month, Weber served as the chair of California’s electoral college, announcing the selection of President-elect Biden and Harris to the applause of electors gathered in the Assembly chamber.

Newsom could have allowed a career government employee to serve in the job until the next election. Twice in the last 50 years, an acting secretary of state stepped in but both instances were for shorter periods of time than the two years left in Padilla’s current term. The last time a governor appointed someone to the post was in 2005, when then-Gov. Arnold Schwarzenegger chose Republican Bruce McPherson following Democrat Kevin Shelley’s resignation after investigations into his campaign finances and conduct while in office.

One early challenge for Weber will be to resolve a simmering clash between Padilla’s office and state finance officials over a $35-million contract to provide voter education services for the November election. Republicans cried foul when the contract was given to a political consulting firm with close ties to President-elect Biden. Last month, state Controller Betty Yee rejected a request to pay the contract, a dispute centered on whether it was a permissible use of election funds authorized by the Legislature. Newsom’s budget advisers have been reviewing the issue and a lawsuit filed in October seeks to permanently block payment.

Even so, Weber is poised to take office at a high point for voter participation. A higher percentage of eligible voters cast ballots in November than in any election since 1952. Researchers hope to determine whether voter outreach efforts resulted in an electorate that came closer to reflecting the state’s diversity than in prior elections.

As chief elections officer, Weber could choose to further Padilla’s efforts or emphasize a variety of other ways to increase election turnout — including whether the state should make permanent this year’s decision to mail every voter a ballot. She also could play a sizable role in the national discussion over election security and efforts to modernize voting machines used across California.