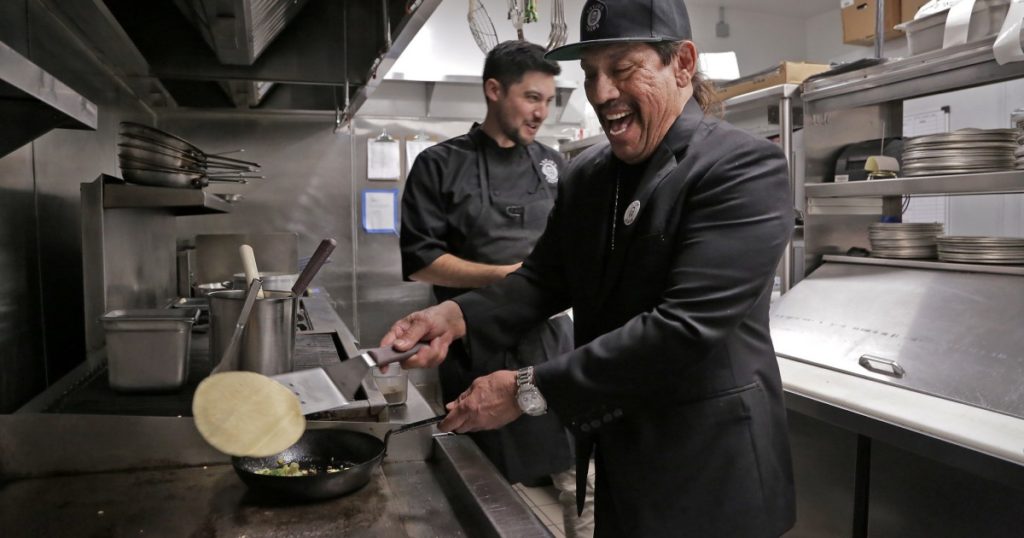 With a date-flavored horchata in one hand and a notebook in the other, I stood outside Trejo’s Coffee and Donuts in Hollywood with a modest proposal to anyone who passed by:

Danny Trejo for U.S. Senator. Yes, that Danny Trejo. Craggy-faced, mustachioed. Nicknamed after a handy agricultural instrument that has starred in many a horror flick.

California Secretary of State Alex Padilla? Nice, but he’ll be too moderate for progressives. State Sen. Maria Elena Durazo? Too progressive for the moderates. Atty. Gen. Xavier Becerra? Too good at his job for us to lose him to a place where he’ll be one of a hundred votes instead of his current role as a — yep — machete for justice. (Besides, President-elect Joe Biden might snag Becerra for his Cabinet.)

No, nah, and not until Orange County is finally, truly blue.

Besides, I mentioned all those politicians to the hip, multicultural crowd who streamed into Trejo’s Coffee on a recent morning for delicious donuts and last-minute breakfast burritos. California’s Democratic superstars didn’t register with them at all.

Everyone whom I talked to quickly smiled, thought about it for a bit — then smiled some more.

A group of TikTok talent sat in the bed of a Toyota Tundra in the Trejo’s parking lot. They enthusiastically offered their endorsement in between chomps of donut holes.

“A wise man and logistic-rical, if that’s a word,” said another.

“He knows what the people want,” mumbled out a third. “He opened a taco spot and a donut spot.”

(They identified themselves with names that turned out to be a collection of Internet memes, thinking they could pull one over this Gen X reporter. Ah, youth).

Outside Trejo’s, Raul Niebles of Long Beach took a selfie with what looked like a maple bar. “He’s the man!” said the 32-year-old mechanic. He mentioned Trejo’s toy drives for kids, and speeches to high-schoolers. “Like, you get what you see with him. He got big, but he’s never let it get to him.”

“I respect the hell out of the man,” she said. “He has genius in him.”

Her friend from Oklahoma, Kameron Swift, was more skeptical.

“Celebrity swings the popular vote,” said the 21-year-old. “It’s more like, ‘We get to say we elected a celebrity,’ than an actual learned person. But I appreciate the idea.”

“That would be better than the alternative: politicians,” Thompson retorted.

Inside, 29-year-old barista Luke Bellwood whipped up drinks. A notice taped to the door read “Facemasks coverings are mandatory” with a picture of Trejo brandishing a scowl and a machete.

“He’s an icon of Los Angeles,” said Bellwood, an East Hollywood resident. “Man of the community, and a wonderful boss. Him being senator would be cool.”

If only California politicos were as enthusiastic about my idea.

I asked for a comment from Gov. Gavin Newsom, who gets to pick Harris’ replacement; his spokesperson sent along a YouTube clip of a Nov. 9 press conference where Newsom said that “the process is just beginning to unfold” but that it will be “inclusive.”

I got no response from Rep. Tony Cardenas, who was there to show support earlier this year for his personal friend when the Los Angeles City Council declared that Jan. 31 was Danny Trejo Day.

When I asked National Association of Hispanic Real Estate Professionals CEO Gary Acosta for his thoughts, his response was merely “there is no shortage of qualified Latino Californians.”

Way to spoil the fiesta.

They might’ve thought I was joking. You, gentle readers, probably do.

Newsom’s choice to replace Harris is going to be one of the most monumental of his career — and one that will upset everyone except the new senator. That’s why we need a unity candidate, someone all Californians can rally around in these divided times.

And the more that I weeded through Newsom’s long list of hopefuls, the more I thought about Trejo.

He’s the epitome of someone who pulled themselves up from their proverbial bootstraps and showed anything is possible if you just grind.

He’s a small-business owner with a growing taco empire who knows how to balance a ledger and understands that government can be both friend and foe.

The San Fernando Valley native would be the state’s first U.S. senator born and raised in Southern California in over 50 years (last one? Republican Sen. Thomas Kuchel, the pride of my hometown of Anaheim).

Trejo has long advocated that his fans engage in politics, participating in get-out-the-vote efforts and even selling red-white-and-blue donuts in the lead-up to Election Day.

He is someone that Democrats and Republicans alike would support, because who can possibly hate him, the most likable Angeleno since Huell Howser?

He doesn’t have the ego of previous celebrities-turned-politicians like Arnold Schwarzenegger or Donald Trump, so we don’t have to worry about a showman with nothing to show at the end of their term. His command of the screen and podium makes Ronald Reagan seem as well-spoken as Dan Quayle.

And, oh yeah, Trejo is Latino and would be the first-ever U.S. senator from California of Mexican descent.

Trejo is so committed to work that he was unavailable to even offer a statement for this column — he’s filming a project.

Just my type of politician: responsible to his tasks.

I’m not the first person to think he should run for higher office, by the way. In 2017, Anthony Bourdain told me on his CNN show, Parts Unknown, that Trejo should run for president.

Later in the episode, Bourdain went to Trejo’s Cantina off Cahuenga to praise his prospective presidente.

Trejo, ever the humble man, deflected.

I doubt Newsom will even think to consider Trejo. But he should. Politics shouldn’t always be about insiders or lifers, or people who feel they deserve a position just because they’ve put in the time or proved loyal to a party or person. Our democracy needs continuous jolts from commoners to keep the political class honest.

Besides, Gavin: Imagine the headlines.

Or the best one:

Newsom Picks Most Qualified Candidate to Become California’s Next Senator.