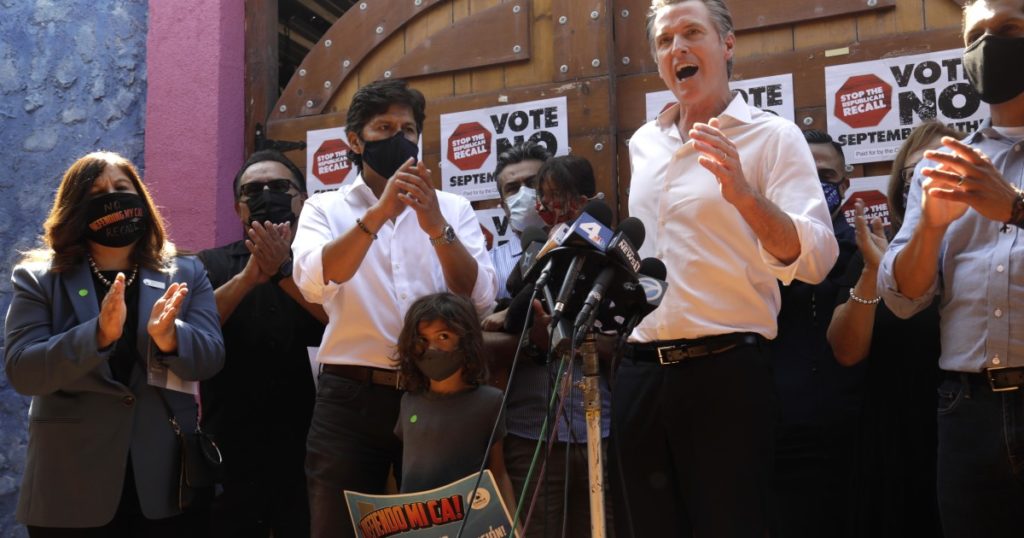 With voters beginning to receive ballots and election day less than a month away, California’s historic recall campaign kicked into high gear with Gov. Gavin Newsom rallying the crucial labor and Latino vote and his Republican challengers stepping up their attacks.

The ground campaign is expected to be crucial in the coming weeks, with Democrats acknowledging they need a big turnout in the special election to blunt motivated Republicans.

The surge in campaign activity coincided with the arrival of the first ballots in mailboxes across Los Angeles County. Over the next few days, all of California’s 22 million voters will receive a ballot for the monthlong election period that ends Sept. 14.

“I cannot impress upon you the consequential nature of this recall,” Newsom told supporters at an event with Latino political leaders Saturday in El Sereno. “We’re putting everything out on the line. Just 30 days left, and we must encourage votes.”

While Newsom’s GOP challengers have been on the campaign trail for several weeks, the Democratic governor has instead focused on official events highlighting his administration’s pandemic-related efforts. But his weekend events in Southern California were intended not so much to tout accomplishments as to sound a warning about the direction of the state should a majority of voters choose to recall him from office.

“Don’t think for a second that this recall isn’t about all of you,” Newsom said Saturday. “It’s about each and every one of us and the values we hold dear.”

The governor was not the only one seeking to point out the importance of the election for Latino voters. Former San Diego Mayor Kevin Faulconer, who also made a campaign swing through L.A. County, chose a different set of issues — blasting the incumbent’s handling of the COVID-19 pandemic, law enforcement and homelessness as failures that have disproportionately affected Latino and Black communities.

“The unfortunate reality is that our Latino and our Black residents are the ones that are bearing the brunt of these failed policies on crime that Gavin Newsom has made,” Faulconer said Friday in Covina, repeating an accusation that the governor “enabled” the movement aimed at defunding police departments by never coming out against it.

Newsom has said he does not support eliminating the police, but he has advocated for limiting officers’ use of force and other, more progressive measures.

“This is a campaign about bringing California together,” Faulconer said. “Particularly as we’re focusing on the devastating effects of Gavin Newsom’s failed policies, my very direct message to our Latino communities [is] ‘Quiero ayudar.’ I’m ready to help.”

The governor’s counterargument, beginning with a Saturday-morning event in Commerce, centered on his efforts to boost workplace protections for healthcare and service employees during the pandemic’s most dangerous days.

Gathered under a tent in a lively show of support for Newsom were several dozen members of the Service Employees International Union, a group that included healthcare workers, fast-food workers, janitors and child-care providers who have withstood the virus on the front lines.

“I can’t comprehend how we even ended up with a recall election, knowing and seeing everything Newsom has done for us,” said Mayra Castaneda, 41, an emergency-room ultrasound technician from Lynwood. “This virus was such a difficult situation, something no leader had seen before.”

Castaneda said that like many healthcare workers, she was forced to wear the same disposable mask, gown and head covering day after day at the start of the pandemic, until Newsom and other Democrats pushed legislation requiring hospitals to stockpile protective gear. She also cited Newsom’s efforts last year to offer healthcare workers free hotel stays to prevent family members from being exposed to the virus.

As labor representatives lined the stage to welcome Newsom, Castaneda sat in the front row in her neon-colored tennis shoes, ready to spend the day canvassing door to door to support the governor.

Such get-out-the-vote efforts could prove pivotal. Recent polls have found tepid interest in the recall election by a sizable number of Democrats — potentially reducing the party’s 2-to-1 advantage in voter registration and leading to an electorate almost evenly split on whether to remove Newsom from office.

Of the most well-known Republicans seeking to replace Newsom, only reality TV star Caitlyn Jenner had a public schedule of weekend events. After pausing her campaign last month to film “Celebrity Big Brother” in Australia, Jenner launched a planned tour of the state Thursday in Venice Beach, a neighborhood that has become a recent flashpoint in Los Angeles’ homelessness crisis. On Saturday, she visited a weekly car meet in Orange County.

The former Olympian has struggled to gain a foothold in the race, according to several public polls finding her support in the single digits. During the event in Venice, Jenner heavily criticized the state’s handling of homelessness but offered few specifics about her own planned approach.

When the group passed Gold’s Gym, where former governor and 2003 recall election candidate Arnold Schwarzenegger famously began his career as a professional bodybuilder, Jenner told the handful of gym-goers gathered outside that she, too, had once trained there.

“How come you’re not here now?” one hollered back.

“I’ve got to save the state,” Jenner said with a shrug.

Forty-six candidates’ names appear on the ballot as potential replacements for Newsom. The recall asks voters to answer two separate questions: Should Newsom be removed from office, and if he is, who should serve the final year of his current term. Voters who choose to keep Newsom as governor by voting “no” on the first question can still select a replacement candidate on the second question if the recall prevails. Even so, the governor has urged Democrats to skip the replacement contest — and did so again Saturday.

“One question. One answer. No on the recall. Move on. Send in the ballot,” Newsom said during the event in El Sereno. “We’ve got to turn out the vote and remind people of the consequences.”

The governor aimed his sharpest critiques at Larry Elder, the conservative talk radio host and leading replacement candidate in recent polls. While Elder has appeared frequently on national TV programs, he has held very few public events. On Friday, the Republican hosted a Zoom press conference at which questions were limited to those asked by representatives of small media outlets.

At his Saturday events, Newsom likened Elder to former President Trump, pointing out that the radio host’s candidacy has been endorsed by former New York City Mayor Rudolph Giuliani and describing Elder as being opposed to unions, vaccines and environmental advocacy.

State Sen. María Elena Durazo (D-Los Angeles) told the crowd that if they failed to cast ballots, Elder was almost certain to prevail on election day.

“Let’s be clear,” Durazo said. “If you don’t bother to vote, you will be electing a Republican. If you don’t vote, Larry Elder, the equivalent of Donald Trump, will become the next governor of the state of California, and we will lose all that we have gained.”