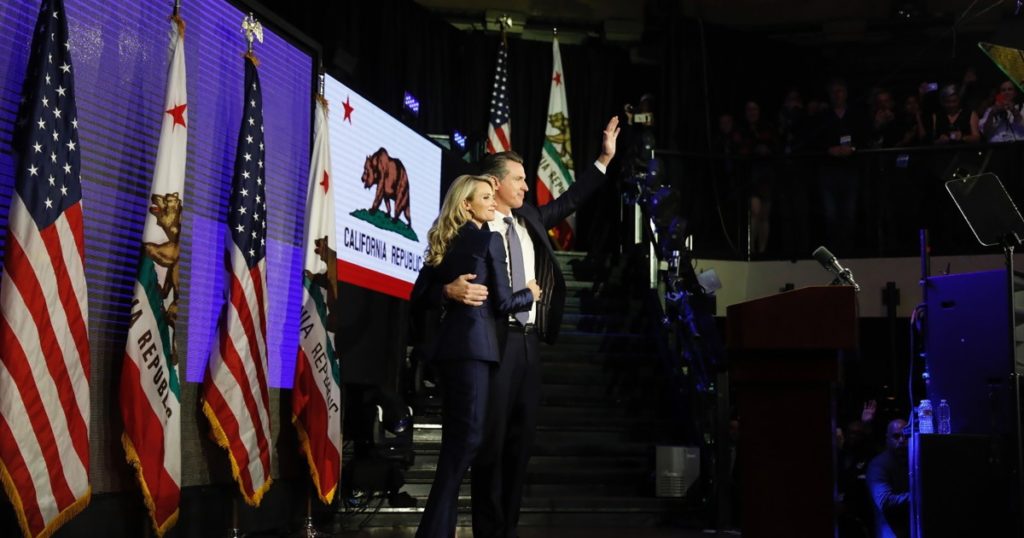 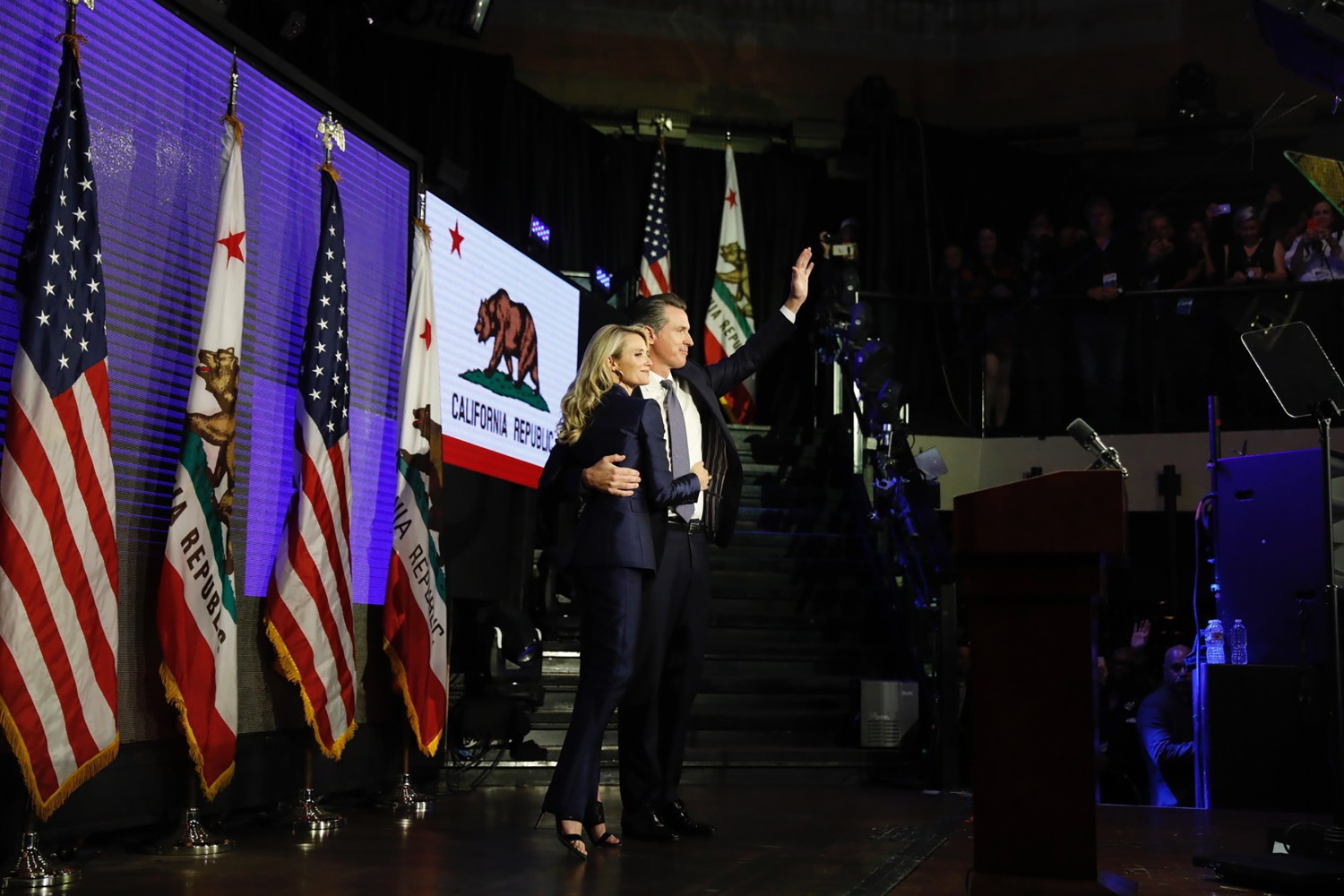 California Gov. Gavin Newsom and his wife, documentary filmmaker Jennifer Siebel Newsom, reported an income of $1.7 million in 2019, a half-million more than the year before, with most coming from the governor’s wineries, restaurants, hotels and other hospitality businesses.

The Newsoms’ vast array of long-held investments, which they put in a blind trust when he took office in 2019, have helped them earn an average of more than $1 million a year since at least 2011. Those earnings have bankrolled an upscale lifestyle that allowed them to purchase a $3.7-million, six-bedroom home just outside of Sacramento in 2018 and pay $288,000 in wages to household employees.

On Monday, Newsom allowed reporters to view his 2019 federal and state tax returns, which he filed jointly with his wife, covering his first year as California governor. His 2020 tax returns were not available because, as he did in 2019, the governor filed for an extension with the Internal Revenue Service and he doesn’t expect to file until October, according to Nathan Click, spokesman for Newsom’s political operation.

Newsom has often talked about the financial hit his holdings in California restaurants, hotels and bars have taken in 2020 due to the COVID-19 pandemic and the statewide stay-at-home order he enacted in March of that year, hurting the state’s hospitality and tourism industries.

Californians could find out the extent of that financial hit on Newsom’s business holdings by the fall.

Due to a new state law, Newsom may be forced to make his 2020 tax returns public just days after he files them — and shortly before he is likely to face a recall election to determine if he should be removed from office. Although proponents have gathered enough petition signatures to qualify the recall for the ballot, the timing of the election won’t be known until after state officials review its costs, with the final decision made by Lt. Gov. Eleni Kounalakis.

The governor’s income included a $125,000 advance for a book for children with dyslexia, a project that he said is informed by his personal struggles growing up with the learning disability and helping his own dyslexic child learn to read.

Newsom’s earnings included his salary as governor, $175,000. Jennifer Siebel Newsom earned a salary of $150,000 as head of her foundation, the Representation Project, and a $50,000 salary from her film production company, Girls Club Entertainment.

The couple also collected $140,000 in rent payments from the house they own in Marin County where they lived before Newsom was elected governor, though they reported an overall loss on the rental due to their mortgage and tax payments and depreciation. The tax returns also show that the Newsoms paid a $9,305 federal tax penalty for underpaying their estimated quarterly taxes.

Among their listed expenses was $1,209 in storage costs for the Newsoms’ silver and platinum holdings. Previously, the Newsoms made nearly a half-million dollars trading silver bars in 2011 alone.

The tax returns did not provide detail on the $288,000 spent paying household employees but did show that the Newsoms paid $35,000 for Social Security coverage and $8,000 for Medicare, as well as $4,000 to the state’s unemployment benefits fund.

Advisors to Newsom argued that any candidate who runs in the recall election will have to disclose five years of tax returns under the 2019 state law originally designed to force the hand of then-President Trump.

State Democratic lawmakers, who had spent two years trying to enact a presidential tax disclosure law, agreed to add candidates for governor to their effort two years ago. But the Trump disclosure rule was blocked by a federal judge two months after Newsom signed the bill, leaving intact only the rule applying to gubernatorial candidates.

It’s unclear to what extent, if any, the disclosure law will apply in the recall election to be held later this year. The California statute says a candidate’s name will not be printed “on a direct primary election ballot” without filing copies of tax filings with the secretary of state, a provision that would seem to limit its impact to the statewide primary in 2022.

The law also says disclosure is required “98 days before the direct primary election,” but recall elections are scheduled no later than 80 days after the effort is certified to appear on the ballot. No candidate can formally file to run in the recall contest until the lieutenant governor schedules the election, leaving even less time than the 2019 disclosure law for tax returns to be disclosed.

“It sounds like it’s an open question,” said Richard Hasen, an expert on election law at UC Irvine.

Among Newsom’s announced challengers, former San Diego Mayor Kevin Faulconer and reality television star and former Olympic gold medalist Caitlyn Jenner, both of whom are Republicans, said they would abide by whatever is required by law, according to their representatives. Campaign officials for Rancho Santa Fe businessman John Cox, a Republican who lost to Newsom in the 2018 governor’s race, could not be reached for comment.

Former Northern California Republican Rep. Doug Ose said he will gladly make his tax returns public, noting that he believes all candidates for statewide office should be required to release their tax returns, as should their top advisors in office.

“I have no problem with the disclosure. I think it’s fair information that voters should have access to,” Ose said.

When he released his returns on Monday, Newsom allowed reporters to review — but not photocopy — his 2019 taxes at the Sacramento office of his political advisors. Reporters were allowed roughly an hour to examine a stack of tax documents roughly two inches thick.

Newsom often cites his business expertise as a key credential in his ability to govern a state as complex as California, one of the most economically diverse states in the union.

With the help of the wealthy Getty family, heirs to a family oil fortune, Newsom opened a San Francisco wine store in 1992, expanding it over the last 25 years into a network of nearly two dozen businesses known as PlumpJack Group. The businesses include Napa Valley wineries, hotels in Lake Tahoe and Palm Springs, and bars and restaurants in San Francisco.

Under the terms of his blind trust, the trustee has total authority over the assets, including the power to sell off Newsom’s business ownership without consulting him, according to the governor’s office. The trustee is barred from discussing those decisions with Newsom.

Most of those assets remain in his financial portfolio, however, and were listed in his 2020 statement of economic interests filed with the California Fair Political Practices Commission.

Before the assets were placed in a blind trust, Newsom’s taxes listed the income he received from each individual business holding, including specific wineries and cafes. His 2019 tax return did not provide that detail, instead listing each business entity by an anonymous “activity” number, making it impossible to discern his income from each one.